A.J. Pollock might well be the hottest player in baseball right now, getting four hits, including a double and homer, as well as stealing two bases. Between that and Rubby De La Rosa, we were basically sorted.

Remember when Paul Goldschmidt was going to canter off and win the team MVP award by the length of I-10? Seems A.J. Pollock has other ideas lately: his recent incandescent streak had narrowed the gap between himself and Goldie to 0.5 fWAR and 1.1 bWAR coming into tonight's game, and it's only going to have got closer. For Paul's struggles persisted, as he went 0-for-4 with three strikeouts, and A.J.'s surge also continued: he homered, doubled, singled twice, stole two bases and scored half our six runs. It made him the second D-back ever with consecutive four-hit games, Steve Finley being the only other [he did it twice, Sep 6-7, 2003 and June 1-2, 1999]

Pollock is now hitting .408 for the month of August, and has been hotter even than that recently. Over his last 11 appearances, he has seven multi-hit games, and four of those were with three or more hits. Tonight made him the only player in the majors this season with 30 SB and 30 doubles, and he's the first D-backs hitter to reach that pairing since Eric Byrnes in 2007. He certainly wasted no time in making an impression on this evening's game in Cincinnati, After Ender Inciarte was rung up on a dubious call, Pollock deposited a 1-1 pitch into the left-field seats, off former D-back David Holmberg, and barely slowed down thereafter.

That run was, however, the only tally for either side through the opening third of the game. While we managed to get a number of base-runners against Holmberg, we weren't able to do much with them, stranding a runner in scoring position each of the first three innings. That pattern changed, for the better, in the fourth, as Arizona scored four runs on five hits and a Goldschmidt plunking [Boooooo!]. Yasmany Tomas got things going with a very long bomb, just to the right of center field, his eighth of the season. Chris Owings then singled and stole second, one of four SB tonight, the most we've had in a game since before the All-Star break.

Rubby De La Rosa then singled to put runners on the corners, and Ender Inciarte brought Owings home with a sacrifice fly. Pollock doubled and Goldie was, as noted, hit by a pitch to load the bases for Welington Castillo. .It looked like he had lined out to short, but a fairly casual attempt by the Reds' infielder above his head led to it glancing off his glove and rolling into the outfield, for a two-run single [I'd call it some charitable scoring, or a very loose definition of "ordinary effort", but since I have Castillo on my fantasy team, I will not be tiling any kind of formal complaint regarding this matter.]

That made it 5-0, and wearing his pitching head, De La Rosa was cruising through five shutout innings. He did give up a leadoff double in the third, and one-out doubles in the fourth and fifth, but buckled down when necessary. He could conceivably have had seven shutout innings if the defense had played its part as we know they can: Inciarte misplayed a ball in left field which led to the first run scoring for the Reds in the sixth, and a throw home from Tomas to Castillo in the seventh should have got the runner, but for the most amazing bit of Matrix-style avoidance I've seen at home-plate. That, incidentally, was just the second hit with RISP Rubby had allowed in August.

The night after Patrick Corbin could only last two innings, we needed a solid outing from our rotation, and De La Rosa certainly delivered, scattering seven hits and a walk over seven innings, with six strikeouts. At 93 pitches, he could have gone out for the eighth, but Chip Hale opted to go to the bullpen instead. That decision immediately backfired, as Keith Hessler allowed a home-run to the only batter he faced, Joey Votto, and Addison Reed then gave up a bunt single, to bring the tying run to the plate, with nobody out in the eighth. About 800 feet of long fly-outs and an infield pop-up later, Diamondbacks' fans collectively exhaled.

Aaron Hill added a bit of insurance in the ninth with a sacrifice fly, but Ziegler snorted derisively about the concept of insurance and pitched a 1-2-3 ninth to notch his 21st consecutive save for us. Outside of Pollock, there were also two-hit games for Castillo, Owings and De La Rosa, with Hill getting a hit and a walk; Castillo also walked, while Hill and Owings stole bases, but Hill was also caught napping and TOOTBLAN'd off second. All told, however, it was a good performance, particularly through the first half. I will admit to having concerns later on about this game turning into a reverse of yesterday, with the Reds coming back to snatch it. Fortunately, these proved unfounded! 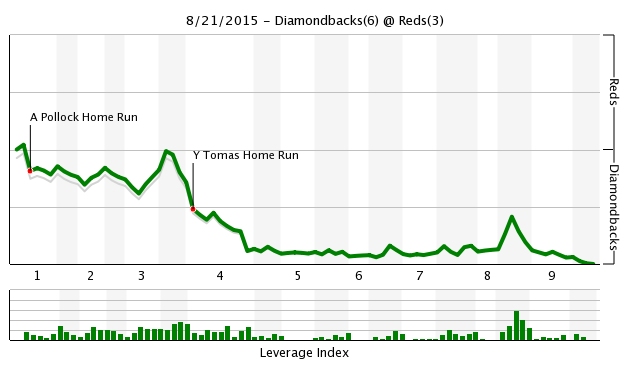 Solid GDT for a Friday night, just shy of 500, with freeland1787, GuruB and noblevillain leading the way, ahead of the pack, who consisted of Augdogs, AzDbackfanInDc, Clefo, Jim McLennan, JoeCB1991, Makakilo, MrMrrbi, Oldenschoole, Re Tired, SongBird, cheese1213, gamepass, hotclaws, onedotfive, piratedan7, since_98 and thunderpumpkin87. Comment of the thread to Clefo, though it does require a little more context than usual

We will attempt to send the Reds to their eighth consecutive defeat tomorrow, and guarantee ourselves at least an even split of the road-trip. There might be something about our own record too, but let's not talk about that! It will be Randall Delgado starting for us, so I'm expecting a bullpen-based game; another reason it was good Rubby went seven innings here.