The game started pretty quietly in the first inning with both sides fading into the afternoon. Collin McHugh retired the Diamondbacks in order, and Robbie Ray was able to get through the inning unscathed thanks to some nice fielding from Cliff Pennington.

The second inning would prove to be much more eventful with Wellington Castillo and Jake Lamb hitting back-to-back one out doubles. Unfortunately, the offensive came to a halt after Jake Marisnick robbed Aaron Hill of a base hit with an impressive diving catch, and shortly thereafter Lamb found himself on the wrong side of a pick off at second base. 1-0 Dbacks.

The bottom of the second started out rather similarly for the Astros. Jed Lowrie hit a leadoff double, which was followed by a sacrifice bunt and a sac fly to tie the game. Jason Castro threatened to keep the offensive going by hitting another double (which incidentally could have been a triple if Castro hadn't second guessed himself by assuming that Yasmany Tomas had fielded the ball properly). However, his mistake wound up being inconsequential thanks to Ray striking out the next batter he faced to end the inning.

While McHugh settled into efficiency over the next two innings, Ray began to struggle with his control, culminating in the bottom of the fourth when he gave up a walk, a hit, and a hit by pitch to load the bases (albeit with two outs). The Astros took full advantage of the situation by hitting a two RBI single to take the lead. 3-1 Astros.

In the top of the fifth, the Dbacks made a semblance of retaliating thanks to a one out double from Pennington followed by a single from Nick Ahmed. However, McHugh cleared the mechanism and struck out the next two batters to end the inning. Shortly thereafter, the bottom of the fifth started out with a bang for the Astros with a leadoff homerun from Evan Gattis. But, after starting out hot, the inning simmered down with a deep fly, yet another walk, and two more strike outs. All things considered, Ray managed to pitch 5 complete innings giving up 7 hits, 4 earned runs, 3 walks, and 5 K's.

Andrew Chafin took the sixth, and David Hernandez took the seventh, and both kept the Astros off the board while striking out two. Meanwhile, McHugh continued to frustrate the Dbacks through the combination of good fielding and generous strike calls. He would leave the mound for good after 7 complete innings with a stat line of 8 hits, 1 earned run, 1 walk, and 6 K's (I knew I should have picked him up on the waiver wires in my fantasy league). The eighth inning went by rather quickly with both Pat Neshek and Oliver Perez respectively shutting down the side while striking out two. Luke Gregerson took the mound in the top of the ninth to attempt the save, and in spite of giving up a leadoff double, the Dbacks were yet again unable to bring anyone home.

At the end of the day, Mount .500 slowly fades away once more as the Dbacks lose their first series since July 22nd when they dropped two consecutive games to the Marlins. 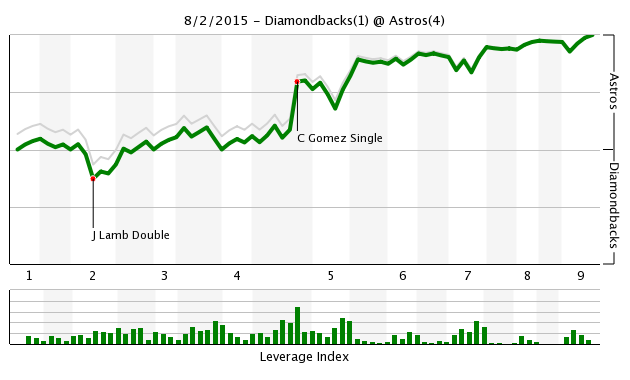 The Gemeday Thread ended spot on the nose of 300 comments, with the top three being freeland1787, Oldenschoole and GuruB, with other contributions from: AzRattler, Clefo, GeauxAstros, Husk, Jharrison83, Jim McLennan, JoeCB1991, Majabe, MrMrrbi, Nate Rowan, SongBird, cheese1213, dsadbacks2001, gamepass, hotclaws, noblevillain, nolanriley13, onedotfive, since_98 and xmet. With no comment receiving more than single rec, I think we'll be with-holding Comment of the Thread, in much the same way the top of the Diamondbacks offense with-held their effort today.

Thanks to Mr. B for recapping this one, and it's on to Washington for another potentially tough series, as we take on the Nationals for four. The first of these starts at 4:05pm Arizona time, and involves Zack Godley in his third and possibly final start for Arizona, with Chase Anderson looking to come back off the DL before too long.