Despite the Wheel of De La Rosa landing on quality start, the Dbacks were unable to pull out a victory. Rubby De La Rosa scattered 7 hits and 4 walks over 7 innings and only allowed 1 run. Unfortunately, Braves starter Shelby Miller carried a no-hitter into the 8th inning, so De La Rosa ended up getting stuck with a no decision. The Dbacks rallied to tie the game in the 8th, but ultimately fell to a Cameron Maybin walk off HR in the bottom of the 10th.

The Dbacks quickly started the first inning with back-to-back walks, but didn't advance further following a pair of strikeouts and a fly ball out that Braves LF Michael Bourn made an excellent catch on. The Dbacks only got two base runners after that point with walks to Inciarte in the 3rd and Peralta in the 7th. Miller cut through the Dbacks lineup with 10 strikeouts in the front 7 innings.

The Braves had a golden opportunity to put this game away in the 5th with the bases loaded and 1 out. De La Rosa did a great job of limiting the damage as he induced a ground ball that Ahmed dropped while attempting to tag an advancing runner, a strikeout, and a ground out. Limiting the damage to 1 run over 7 innings kept the team within striking distance, in case Miller lost the no-hitter.

In the 8th inning, Ahmed lead off with a blooper just outside the reach of Braves 2B Jace Peterson. Pinch hitter Jarrod Saltalamacchia following with a hard ground ball with Peterson could handle to advance Ahmed to 3rd and chasing Miller from the game. The Braves then put in Rangers reject Ross Detwiler into a near impossible situation. He got Ender Inciarte to ground into a forceout at 2nd, but the damage was done and the game tied. As a result, Shelby Miller's winless streak extended to 16 games. As a fun fact, his first start in that streak was June 2nd, in which he struggled mightily against the Dbacks in a 4 1/3 inning, 6 run performance.

The Dbacks put runners on base in the 9th and 10th inning, but could not advance either past first. In the 9th inning, the Braves were threatening with the winning run on 2nd with Michael Bourn at the plate. Bourn blooped a fly ball to shallow center, but was denied by Inciarte's diving catch. The game went into extras at that point. After failing to score in the top of the 10th, David Hernandez immediately served up a home run to Maybin, who ended the game with a walk off home run to cap off a disappointing series. Dbacks pitching was fairly solid, allowing 7 runs in 26 innings, but the bats went quiet for the two games they lost with a combined 3 runs in those contests. It's onto the next city and onto the next game. 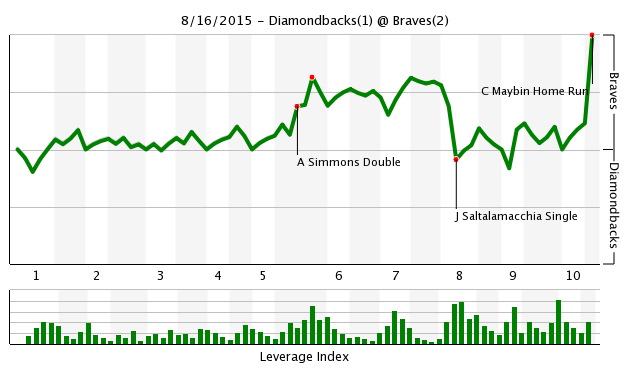 Your recapper freeland1787 was clearly paying attention, leading the comments as well ahead of JoeCB1991 and GuruB. Also to be seen: BenSharp, Clefo, Husk, Jim McLennan, Makakilo, MrMrrbi, NumberOneIanKennedyFan31, Oldenschoole, Re Tired, SongBird, asteroid, catbat, gamepass, hotclaws, onedotfive, porty99, preston.salisbury, shoewizard and thunderpumpkin87. St Penelope's appearance was the top-recced comment, and I guess she did her job, but since we lost the game, so we'll go with the other pink comment from Songbird.

Well, Shelby, we got you that run you’ve been asking for! Loser!

It's on to Pittsburgh for the D-backs, with a first pitch tomorrow of 4:05pm, and Jeremy Hellickson taking the mound for Arizona.