Diamondbacks 8, Braves 4: I am paying attention

Yeah, in sharp contrast to last night's contest, this one was a great deal more interesting and entertaining. Great starting pitching, timely offense, and just in case you were getting complacent, even a non-fatal bullpen meltdown.

Share All sharing options for: Diamondbacks 8, Braves 4: I am paying attention

It didn't take long for Patrick Corbin to surpass the strikeout number recorded by everyone who pitched for the Diamondbacks in the series opener yesterday. With his 13th pitch of the game, in fact, he struck out Jonny Gomes, threby surpassing the zero K's we managed on Friday. That very much set the tone, for this Corbin was, from what I could see, the best Corbin we've seen since he came back from Tommy John at the beginning of July.  Between a one-out single in the first, and a two-out double in the fifth, Corbin not only kept the Braves hitless, they barely got the ball out of the infield: at one point, Pat recorded a dozen straight outs by K or ground-ball.

He struck out Gomes again to open the seventh, with his pitch-count at that point well below the limit of 95. A single was followed by Corbin's eighth and final strikeout, but after getting 0-2 ahead of Andrelton Simmons, Corbin threw eight straight balls to walk that batter and the next one, and Chip Hale went to his bullpen. He said afterward, he didn't think Corbin was gassed, more that the pitcher was trying to be too fine, but considering that Corbin had missed with only 26 pitches over his first 83, to go out of the zone with eight in a row certainly made for a red-flag. Still: the final line was excellent: 6.2 innings of work, with three hits, three walks, and eight strikeouts.

He did leave with the bases loaded and though it was only the seventh inning, I was pleased to see Hale not mess around, going straight to David Hernandez, rather than any of the B-bullpen. Hernandez didn't mess around either: six pitches, four strikes, three of them swinging, and Corbin's shutout outing could be inked into the books. The pesky third out which escaped Corbin proved even more troublesome in the eighth. Keith Hessler got the two lefties who came up against him, around a one-out double, but it took five attempts for he and Daniel Hudson to get the last out, A six-run lead had turned into two, with the tying run left at the plate, by the time Hudson finally did.

Fortunately, that turned out to be as close as Atlanta would come, with Arizona tacking on a couple of insurance runs in the top of the ninth, and Brad Ziegler coming in with a calm, drama-free bottom of the ninth to pull Arizona back to within a game of .500. However, credit for this one likely goes as much to the offense as the pitching, considering that the four runs allowed would have been enough to lose us yesterday's game was well. Today, the D-backs came to play, led by second-half MVP David Peralta, who reached base safely three times, and drove in a trio of runs, including his 12th home-run of the season. His 2015 line is now .304/.370/.528.

A lot of other solid performances here. A.J. Pollock scored three runs on two hits plus a HBP, and also stole his 28th base of the year, on the back end of a double theft behind Ender Inciarte in the ninth. That ties Pollock with Tony Womack's 2002 campaign for the fourth-most by a Diamondback in a single year; third on the list is also Womack, with his 45 SB in 2000. Reaching that might be a stretch for Pollock, yet he seems to have ramped up his pace, with six over his last ten games now. Paul Goldschmidt had a pair of hits two, driving in a couple of welcome insurance runs in the ninth, but struck out the other three times he was up. Jake Lamb also had two hits and an RBI.

Curious that this one ran almost exactly the same length as last night - 180 minutes, as opposed to 178 - but seemed an awful lot more entertaining. Taking an early lead with another first inning run probably helped, so thank you Peralta. The middle innings boosted the lead, with Corbin's fine performance to admire and then, just when we were being lulled into a sense of complacency, and the Gameday Thread had gone quite (TOO quiet?), the bullpen provided a jolt of caffeine to our synapses before the natural order of things was restored with Brad Ziegler converting his 19th consecutive save opportunity. You could hardly draw it up better, for entertainment purposes. 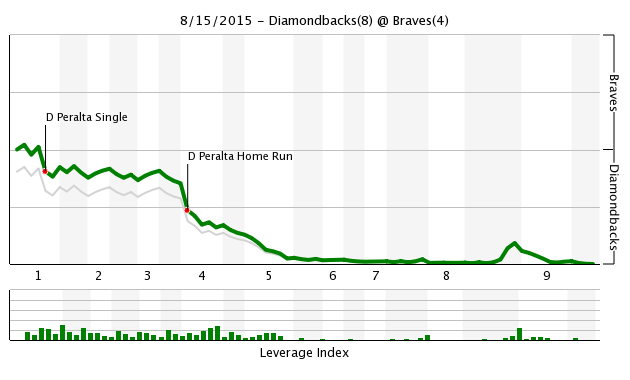 About 50% more comments than last night, with GuruB leading the way, ahead of Oldenschoole and noblevillain. Others with nothing better to do on a Saturday night were: 4 Corners Fan, BenSharp, Indedave, Jim McLennan, JoeCB1991, Makakilo, SongBird, asteroid, ford.williams.10, freeland1787, gamepass, hotclaws, onedotfive, preston.salisbury, sepehr3 and shoewizard. Comment of the thread to Oldenschoole for his comment after Ziggy's 1-2-3 ninth:

And that, ladies and gentlemen, boy and girls,

and relief pitchers too, is how you throw a shut-down inning.

I hope the rest of the bullpen were indeed paying attention! Rubber game of the series tomorrow, with an unfeasibly early start at 10:35 am Arizona time. Rubby De La Rosa takes on Shelby Miller, who hasn't won in his last 15 starts. That may not matter, depending on where about the Wheel O' De La Rosa lands on Sunday!