Diamondbacks 2, Braves 3: The ennui is overpowering

It's never a chore to recap a win. There are even losses that are interesting to watch and write about. Then there are games like tonight's in Atlanta.

Share All sharing options for: Diamondbacks 2, Braves 3: The ennui is overpowering

[Stares at blank recap page. Blinks. Surfs Reddit for a bit. Stares at blank recap page again. Sighs. Posts on Facebook. Looks up Addison Reed stats. Is pleasantly surprised. Looks at blank recap page, hoping it has mysteriously been filed by the Recap Gnome. Is disappointed. Sighs. Debates writing a review of Sharktopus vs. Whalewolf instead. Wonders if anyone would notice. Hey, look, it was 117 F in Phoenix here today. Scrolls in a desultory fashion through Twitter. Sighs. Makes mental note to write future piece on why baseball should switch to a 16-game regular season. Takes a deep breath. And...]

The box-score tells me that this game took a hair under three hours, which would actually rank it as tied for the 62nd longest contest so far in the 2015 season for Arizona - so, actually quicker than average. However, judging a game's quality by its duration is like critiquing a film based on its length: this felt like a long, drawn-out exercise in futility, as Robbie Ray fell 3-1 behind each of the first four hitters he faced. He managed to escape the first inning, thanks to one of three double-plays turned by the infield behind him, but it just seemed he was throwing through quicksand, trying to be too fine, and not really trusting his stuff.

The same could not be said of Julio Teheran, who struck out five of the first eight Diamondbacks to come to the plate this evening. That included Paul Goldschmidt as part of a double-play to end the first, Ender Inciarte also being caught stealing on the play. Inciarte hsa now been caught seven times in 18 tries, a 39% failure rate which is not what you want from your leadoff hitter. Still, at least he got on base, and that was a rare occurrence for the Arizona hitters against Teheran. The only hit we managed over the first five innings, was Jake Lamb's double with two outs in the top of the fifth.

By that point, the Diamondbacks were already trailing, Ray having surrendered back-to-back RBI triples with two outs in the third inning. It's actually the first time all season Atlanta has had two triples in the same contest, and that inning matched their tally over the previous 30 games combined. That's actually an Arizona speciality - we lead the National League there, having hit 34 three-baggers already, and are on pace to eclipse last year's mark of 47, which was also the best in the National League. Today, however, triples were not our friend, and they gave the Braves a 2-0 lead after three innings.

That then became a three-run advantage in the fifth, with Ray retiring only one of the first four batters to come to the plate there. The last rapped an RBI single, and Chip Hale had seen enough, lifting Ray after 4.1 innings, even though his pitch-count was still relatively manageable, at 83. Ray gave up six hits and four walks, without striking out any of the 20 batters he faced today; it was the first time this year he had struck out fewer than three, and was definitely a disappointing performance. Andrew Chafin came in with two on and one out, but worked out of the jam, getting Peirzyn... Pieryzsn... the Braves catcher to fly out with the bases-loaded.

If there's a bright spot to be taken from the game, it was another solid performance by our bullpen. Chafin, Addison Reed and Daniel Hudson combined to work 3.2 scoreless innings, on two hits and two walks. However, they also failed to strike out anyone, completing the zero-K outing. It was only the second time in franchise history that dubious feat had been achieved, the other being August 29, 2005 in San Diego. [They actually won that one 7-5.] We managed only six swinging strikes all night, in a total of 140 pitches. As a yardstick, the Braves pitchers got nineteen swinging strikes in 145 pitches.

As noted, the Arizona offense pretty much didn't show up through the front five innings, managing only one hit. They did get on the board in the sixth, as Inciarte singled with one out, took second on a wild pitch, and then came home on an RBI double by Goldschmidt - even though it seemed more of a defensive swing than anything else! We then made it a one-run game in the eighth, as the result of an Inciarte double and A.J. Pollock single. Pollock then stole second - his 28th SB of the year, tying him for fifth place on our single-season list - and I thought Goldie might leg it out on a groundball he hit into the hole... Ah. So that's why Andrelton Simmons won the Gold Glove. Gotcha.

So, Inciarte ended up scoring both runs, reaching base three times on two hits and a walk, but the fourth through eighth slots in the order were basically useless, going a combine 1-for-17 with nine strikeouts. Welington Castillo went 0-for-4 with three punchouts, and Lamb also had a trio of K's. One of Welly's swings saw the bat go about 150 feet into the stands, as depicted above. He had that kind of day, but given the results, he's probably better off having to get some new lumber. 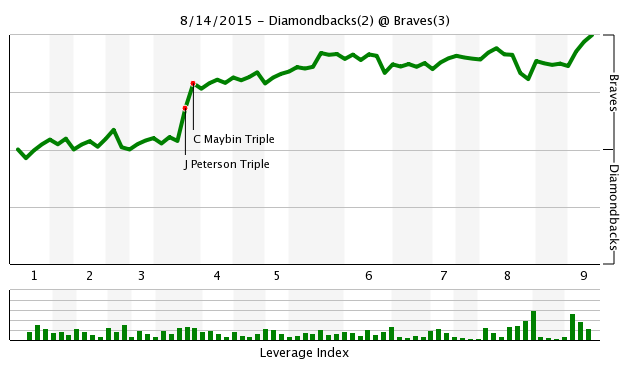 A small no-prize to anyone who can tell me what links those three movies, and the connection to today's game. The thread was, as DeadmanG pointed out, more interesting than the game, I think, even though we managed just 240 comments. So it clearly wasn't just me. NumberOneIanKennedyFan31 led the way, ahead of preston.salisbury and GuruB, with others dropping in being: BenSharp, Clefo, DeadmanG, Jim McLennan, JoeCB1991, JoelPre, Makakilo, ford.williams.10, gamepass, hotclaws, noblevillain, onedotfive, piratedan7 and shoewizard. Commment of the thread to Ms. 'claws, in response to a suggestion that "everything else has been meh or garbage."

Or as I see it

a pleasing upgrade from last year.

Indeed. We'll hope for better - or, at least, more interesting, tomorrow afternoon with a 4:05pm Arizona time first pitch, and Patrick Corbin starting for us.