A three-run deficit proved surmountable for the Diamondbacks, and they extended the current winning streak to their longest by the team in almost four years.

Share All sharing options for: Diamondbacks 6, Astros 4: Beef and Lamb feast in Houston

Two home-runs, both of them cheap shots, almost doomed the Diamondbacks and ended their winning streak at five games, as the little league ballpark which is Minute Maid proved a factor. If you were wondering how the Astros were leading the majors in home-runs this season, this game gives you a clue. Overall, coming into today, 50.8% of HR were hit by the home-team. But in Minute Maid Park, the Astros had benefited from 83 of the home-runs hit there, compared to only 46 by visiting teams (64.3.%). When they get rid of the idiotic Tal's Hill next season, I hope they'll also look at making left-field in line with major-league dimensions.

But enough griping - particularly since we still won. even though the Wheel o' De La Rosa did not land on as favorable a location as in the previous two starts. Instead, it came to rest on the familiar spot labeled "One bad inning," and through the end of the fourth, Rubby De La Rosa had pitched a shutout. It wasn't necessarily dominating, with De La Rosa notching just the one strikeout. He'd both benefited and suffered from unusual plays, such as in the first inning. The Astros' lead-off hitter reached on a Nick Ahmed error - only his ninth of the year - but then managed to end the inning by running into a batted ball, and not even a line-drive but a slow hopper.

Then, in the fourth, it all fell apart for De La Rosa, beginning - appropriately enough - with a real Texas Leaguer. It drifted over the heads of the infield like a lost dirigible, dying on the grass just beyond the despairing grasp of all the Diamondbacks converging on it. This was followed by a perfectly-placed bunt single to put two on, and then a shallow fly ball to the outfield... Oh, my mistake: this is Minute Maid Park, isn't it? So, it was actually a three-run homer. Another, likely warning tracker at Chase Field, followed later in the inning, and Rubby reclaimed his spot as #2 in the National League (behind Kyle Kendrick) for home-runs allowed this year.

De La Rosa left after six innings, having scattered eight hit and a walk, with four strikeouts, and four runs allowed - all of them coming by the long-ball. However, the Diamondbacks managed to claw their way back into things. They had actually taken the lead, on a Yasmany Tomas RBI single in the first, but the Ruby "OBI" had put them in a three-run hole. Two were clawed back in the sixth, largely due to the Astros outfield misplayed a Welington Castillo fly-ball into a double, with Jake Lamb and Tomas picking up RBI groundouts, and a David Peralta RBI single in the seventh tied the game up at four.

By this point, both sides had turned it over to the bullpens, and it looked for a while like one of Clefo's Hardball II simulations, pitting the franchise seasons against each other. This one felt like the 2012 Diamondbacks against the 2015 D-backs, as we got to see both Tony Sipp and Will Harris coming in from the Astros side, as well as another former Arizona reliever, Chad Qualls. Meanwhile, we sent out (gulp!) Addison Reed for the seventh, but it has to be said, he looked pretty good, working a perfect inning and striking out two of the three batters faced. Daniel Hudson followed up with a similarly perfect eighth.

The visitors squandered a decent chance in the ninth inning. Ender Inciarte led off with a single, and was bunted to second by Cliff Pennington, who had come in earlier on, to replace A.J. Pollock (pulled for precautionary reasons related to his hamstring). That brought up Paul Goldschmidt with a base open, and the inevitable base on balls happened, for the 23rd time this season. And equally as predictable was the D-backs' hitters futility after these IBBs. Indeed, it was even worse than usual, as Peralta chopped the first pitch he saw back to the mound for an inning-ending double play. We're now 0-for-20 with three walks following intentional walks to Goldschmidt.

Hudson stayed in for a second inning of work, and looked to have got a clean inning here two, Goldschmidt snaring a hard-hit grounder for the third out, and flipping to Daniel as he covered. But Huddy seemed to take his eye off the ball and it clanked off his glove for an error. That brought up Jason Castro, who had hit a walk-off homer the previous night. But he didn't even get a chance to repeat his heroics, as a snap move from Hudson caught the runner leaning too far, and he was nailed. Oddly, the box-score gives it as a "caught stealing" with credit to Castillo, which seems more than a little unfair. It should have been Hudson's first major-league pick-off, I'd have said.

The momentum change was palpable, the air being let out of Minute Maid stadium like a punctured, dare I say, dirigible [Hey, if I get to use that word twice in a recap, it's a good day!]. And Welington Castillo deflated things for the home crowd much further, taking advantage of the short distance down the left-field line with a cheap shot of his own. There was absolutely nothing cheap about Jake Lamb's back-to-back jack, however: that went a very long way down to the second deck in right field, and the Diamondbacks had a 6-4 lead. Brad Ziegler closed things out with a low-drama perfect bottom of the tenth, and Arizona had won six straight for the first time since August 2011.

Plenty of offense to go around as we out-hit the Astros by a 14-8 margin. Peralta and Castillo each had three of those, with Goldschmidt getting two in addition to that IBB. Tomas also picked up two hits and drove in two runs. Chris Owings strikeout woes continue, however, as he was fanned four times in five trips to the plate tonight. Kinda interesting to see the teams score a total of ten runs, despite managing only three hits between them with runners in scoring position! 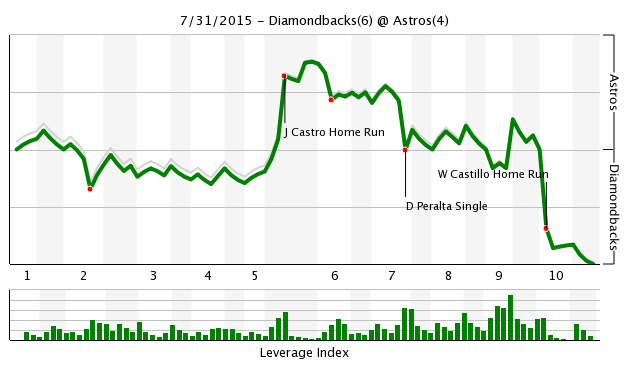 NumberOneIanKennedyFan31 almost took Comment of the Night, for correctly predicting the Rubby De La Rosa OBI, but later blotted his copybook by saying "Houston pen is nasty...  I doubt we get a run off it."  Whoops. So, it goes to soco instead.

former d-backs relievers do the Astros have? Should I expect Jon Rauch at some point?

The real violence, the violence I realized was unforgivable, is the violence we do to ourselves when we're too afraid to be who we really are.

We'll back back tomorrow, with a slightly earlier 4:10pm start, and Jeremy Hellickson starting for us, as we try to... Oh, y'know. That which shall not be named!