Diamondbacks 4, Rockies 6: No Sweep For You

The Diamondbacks were unable to recover from a 4-0 deficit in the first to complete the 4 game sweep of the Rockies.

Share All sharing options for: Diamondbacks 4, Rockies 6: No Sweep For You

The Diamondbacks were doomed from the start today. The first inning saw Rubby de la Rosa allow 2 singles, a Tulo homer, and 3 more singles before he even retired a single batter. The result: 4 runs scored, and it was somewhat miraculous he didn't let another run score in that first inning. Ouch. De la Rosa would settle in from there, retiring the next 14 batters he faced. Things would get ugly again later, but we'll get to that in a moment.

The Diamondbacks would come back at the Rockies with... a 1-2-3 1st inning. Yasmany Tomas would get things started in the 2nd, with a solo bomb out to the pool to make the deficit 4-1. A Castillo walk and Peralta double put runners on 2nd and 3rd with one out for Chris Owings, tying run at the plate. He would fail to get the job done, grounding out to third, and a strikeout of Rubby de la Rosa would end the threat. They would get only one more hit until the 6th, an Ahmed single erased by a double play.

Let's get to that 6th inning mess I mentioned earlier. Rubby would revert to that 1st inning form, allowing a Tulowitzki single followed by a Cargo homer to make the score 6-1. A walk of Michael McKenry would be the end of Rubby's day, for an impressive line of 5 IP, 8 H, 6 R (all earned), 1 BB, and 3 Ks. I'm gonna go out on a limb and say we got the bad Rubby today. Oliver Perez came into the game, where he went K, single, K, K to end the inning.

The Diamondbacks would threaten in the 6th where after an Ahmed double, Pollock productive out, and Goldy walk, the D-Backs had runners on the corners with 1 out. Tomas hit a sac fly scoring Ahmed, to make the score 6-2. Hill had a chance to add on with runners on 1st and 3rd with 2 down, but got rung up to end the inning.

After a scoreless 7th, the Diamondbacks would put up 2 more in 8th. After an Ahmed out, back to back double from Pollock and Goldy made the score 6-3. Tomas followed this up with a single down the left field line to drive in Goldy, putting the D-Backs with two of Colorado. After a pitching change, Castillo struck out and Hill walked to bring up Peralta with runners on 1st and 2nd, 2 outs. Peralta was unable to drive in another run though, leaving the score at 6-4 as the game entered the 9th.

Collmenter came into the game for Arizona in the 9th, where he had one of the scariest scoreless innings I've witnessed. The Rockies took him to the warning track 3 times, but only one resulted in a hit. Collmenter would end up getting out of the inning with the Diamondbacks still trailing 6-4.

The Diamondbacks would rally once again in the 9th, but this one fell short. After Chris Owings flew out, Lamb and Ahmed both singled to put runners on 1st and 2nd with one out for A.J. Pollock. Pollock smoked a liner to right, but was robbed of a base hit by Carlos Gonzalez, who made a great diving catch to record out number 2. With 2 outs, All-Star first baseman Paul Goldschmidt came up to the plate. He got a fastball right over the heart of the plate, but whiffed on it to end the game. Rockies win, 6-4. 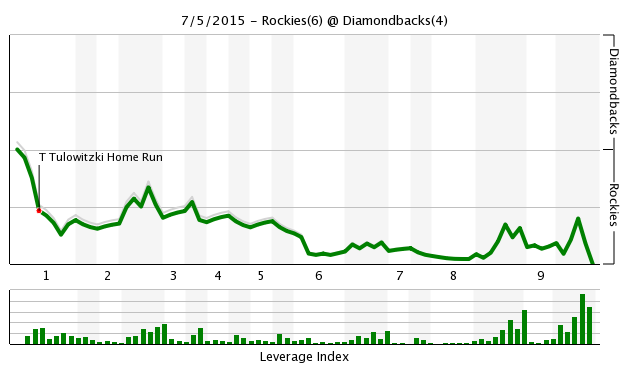 Need a Lamb-shaped Patronus then

Off-day for the team tomorrow, who then head on the road for two in Texas, another off-day Thursday, and then head into the All-Star break with three in New York against the Mets.