Patrick Corbin's return to the major-leagues, after over 21 months away, could hardly have gone any better, as he looked pretty impressive in his first start for the Diamondbacks since Tommy John surgery in March last year.

It's never good to lose players for extended periods, and last season, the Diamondbacks seems to be positively snake-bit in this area: not just Tommy John procedures, of course, but also the broken hands suffered by A.J. Pollock and Paul Goldschmidt. If there's anything good to come out of such lengthy absences, it's that when the players concerned return, it becomes a memorable moment, rather than - as tonight - a mid-season game between two teams, both below .500. I don't think anything will ever quite match the raw emotion of Daniel Hudson's return after two TJ surgeries, this game, on Independence Day, with a crowd of over 42,000 at Chase, must come close.

I'm fairly sure I wasn't the only person to be holding their breath when Corbin toed the rubber and threw his first pitch of the night. I always fear the worst at such moments, dreading something horrible like we saw happen to Jarrod Parker earlier in the season. There was, I'm happy to report, nothing so dramatic here: it was a 92 mph fastball for a called strike, and Patrick Corbin was back. It wasn't exactly a stress-free inning: the lead-off man for Colorado singled, but a nicely-turned double-play erased that runner. A double off the wall in right - Yasmany Yomas misjudging his leap, not for the last time tonight - gave the Rockies another chance, but Corbin got the dangerous Nolan Arenado to ground out.

He had a clean second inning, but Corbin gave up his first runs since September 2013 in the third, on three hits. However, that was the extent of the damage, and Patrick made his way through the end of the fifth inning, helped out at the end by another double-play, when the Rockies had two on and one out. His final line was perfectly respectable: two runs over five innings, scattering eight hits, but walking none, with three strikeouts. His fastball was pretty much where it had been before the surgery, around 92-93 mph, and his slider occasionally looked every bit the devastating weapon it used to be, though the consistency clearly will take some time to return. 76 pitches, so well within his limit.

The offense started off by giving Corbin an early cushion with two runs in the first. Indeed, they loaded the bases without making an out. A.J. Pollock reached on another error by Arenado, then David Peralta and Paul Goldschmidt walked. Yasmany Tomas had a chance for his first grand-slam; however, he grounded into what might have been a double-play. I say, "might", because Goldie ensured that didn't happen, with a takeout slide which deserves to become its own meme, alongside #RKOOutOfNowhere. Jake Lamb followed up with an RBI single, and the Diamondbacks were staked to a two-run lead after one.

After Colorado had tied things up in the third, Pollock delivered a particularly clutch hit with two outs in the fourth. Arizona had put men on the corners with no outs, as Jarrod Saltalamacchia doubled, and Chris Owings singled. Nick Ahmed then bunted; I'm not quite sure what happened, as Saltalamacchia was neither running from third on the pitch, nor was the bunt good enough to merit a safety squeeze. He ended up a completely dead duck. Corbin then bunted the runners to second and third, but there were now two outs. Pollock, unfazed, swatted the ball down the left-field line, past a despairing (and peeved) Arenado for a two-run double, and a 4-2 Arizona lead.

The score remained that way until the eighth inning. After Corbin left the game, Randall Delgado and Enrique Burgos had pitched 1-2-3 frames for the sixth and seventh, and Daniel Hudson then came in. It wasn't one of his better nights: while he got the first out, the next three hitters all reached base, to load the bases and put the tying run at second with one out. A bouncer back up the middle went over his head and turned into an RBI groundout, Hudson then ended the threat, with another groundout, and I exhaled some more.

It proved kinda irrelevant in the end, as the D-backs then small-balled their way to the biggest inning of the night, putting up three insurance runs in the bottom of the eighth. Saltalamacchia singled, was sacrificed to second, then Nick Ahmed bunt singled. Cliff Pennington came off the bench in the pitcher's spot and put down another bunt, which the Rockies 1B botched wonderfully. He thought about coming home, then turned and threw to first - having apparently forgotten that this was where he was fielding. Pennington ended up on third as two runs scored, and Cliff scored on a a David Peralta single. Brad Ziegler worked a perfect ninth, and that was the game. 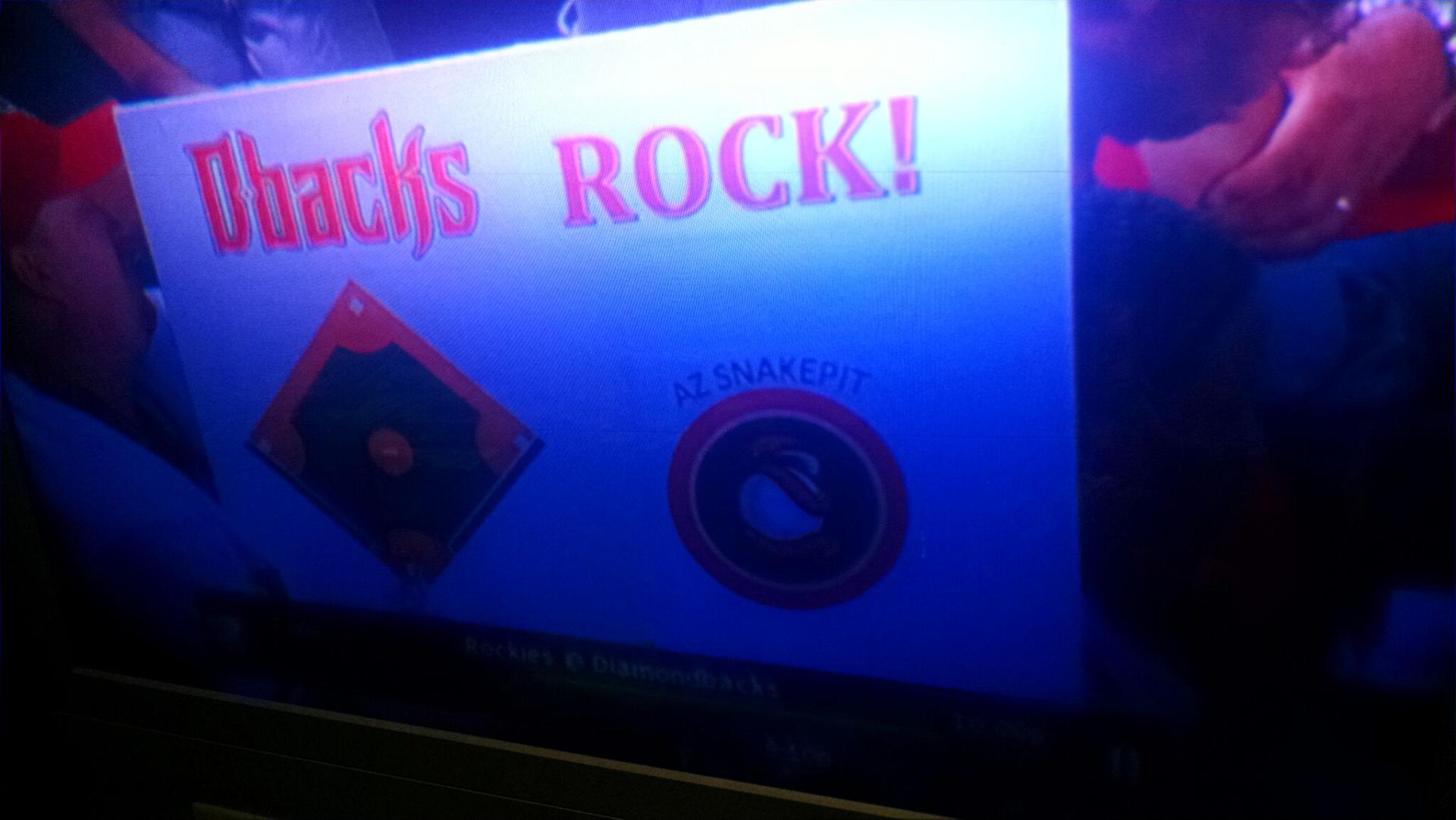 Both sides got 10 hits, but the D-backs had a lot more AB with runners in scoring position, and did better with them, going 6-for-14, compared to the Rockies' 3-for-8. Pollock had two hits, Peralta a hit and two walks, Saltalamacchia a pair of hits, and Owings a hit and a walk. With another loss to the Giants, it means the Diamondbacks are now just 1.5 games back of them for second-place in the division, and reach the halfway point of the season on pace to be 16 games improved over their 2014 record. Another highlight tonight was the SnakePit shoutout on the broadcast, in part inspired by the sign Xipooo had brought to the park (above). All told, not too bad a game, I'd say. 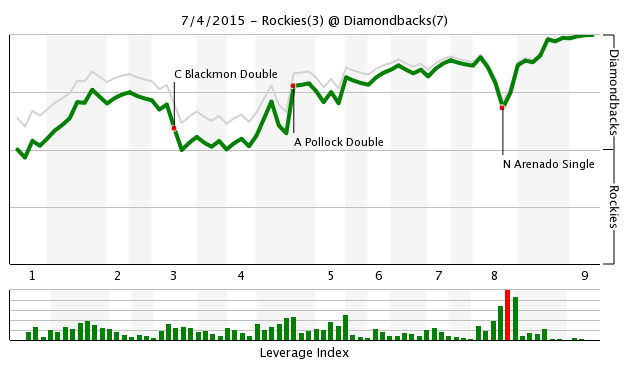 We reconvene tomorrow for the final game, amid hopes of a four-game sweep. It's another Battle of the Roses as Rubby De La Rosa takes on his evil twin, Jorge. And do not forget what we are not talking about. Thank you for your co-operaiton in this matter....