There are games where watching baseball is a lethargic and relaxed experience. This was not one of them. This was a game to get the blood pumping, have you yelling at the TV screen and preparing to storm the bastions of MLB.

The odds of a walkoff win seemed long, since Chase Anderson's problems with the long-ball didn't take long to surface this evening. One batter, in fact, as the Rockies' lead-off batter swatted one into the right-field bleachers for a very early lead. It took Anderson four attempts to retire a hitter, in fact, after the next two Rockies both walked. Despite that, it almost looked like Chase was going to escape, as he then did get two outs; unfortunately, that pesky third one only came after a scorching double down into the left-field corner, where it rattled around long enough to score both base-runners. The Diamondbacks thus found themselves three runs behind, before they even came to the plate.

The work of chipping away by Arizona began almost immediately, with back-to-back doubles from David Peralta and - probably, inevitably - Paul "Foregone conclusion" Goldschmidt. After Yasmany Tomas took strike three that wasn't, this was followed by an RBI triple from Jake Lamb, which was probably most notable for Carlos Gonzalez doing a "Bambi on ice" impression using the Chase Field warning track. A good running catch for the third out stopped the Diamondbacks from wiping out the entirety of the deficit, but they did end the first inning only trailing by one, and the game on pace for a Colorado victory by a final score of 27-18.

Surprisingly, that didn't happen. Indeed, after that two-run double, Anderson settled down and retired the next 14 batters in a row - albeit with the help of a leaping grab from Tomas at the fence in right. His opposite number allowed a few singles, but the only at-bat with a runner in scoring position which resulted, brought Chase to the plate, and he struck out swinging. A.J. Pollock singled to lead off the sixth, but was out trying to stretch it into a double. That took an appeal, over three minutes of review by New York... and I'm still waiting to see the "clear and convincing" evidence required for the overturn of the call which occurred.

According to MLB, "they saw Pollock's hand come off bag before his other one went back on it, while LeMahieu had continuous tag on him." Now, it's possible they saw something, on another angle, not available to either broadcaster [I was, for technical reasons, watching the Rockies feed tonight] - but if that's the case, then they need to make that footage available back to the stations, because the current system does nothing except cause doubt and suspicion when fans of both sides agree it was a bad call. It would be so easy to feedback an image showing the precise reason for the decision, and that could be put up on the Jumbotron. Controversy over.

In the absence of such footage, while there may have been worse reversals this year, I haven't seen one. But would it prove decisive? Certainly, losing a lead-off double in a one-run game is a significant thing: but exactly how important? Using the Win Expectancy Calculator, the WP if Pollock was safe at second was 57.6%. With him out, it drops to 43.7%, a swing of 13.9% based on that call. Could Arizona overcome this? They did tie things up in the sixth, with Cliff Pennington floating a two-out blooper just over the infield to get a third run home for us, after Chris Owings had - and stop me if you've heard this before - struck out.

Chase left after six innings, with a quality start that looked quite unlikely with two outs in the first inning. He was charged with three runs on three hits and two walks, with five strikeouts. Beyond that, the bullpen work for both teams was solid: Enrique Burgos, Daniel Hudson and Brad Ziegler all threw scoreless - indeed, hitless - innings for the Diamondbacks,  and following the flurry of five runs in the first inning, the next 7 1/2 proved not just a great deal more scoreless, but without much approaching a serious and sustained threat, Pennington's blooper being the only tally for either side.

The ninth gave the Diamondbacks a chance to walk off winners Nick Ahmed came off the bench to draw a pinch base on balls, and Pollock reached on a bunt, as no-one from Colorado covered first. David Peralta hit a groundball back up the middle, but was able to leg out the double play. Colorado then made the obvious decision to walk Goldschmidt and load the bases for Yasmany Tomas. He, unfortunately, struck out swinging at some high heat, and Lamb was unable to squirt the ball through the infield, as Arizona left them loaded, and the game moved into extra innings. Colorado then loomed in the 10th, putting two on with no outs, before a pleasant double-play helped Andrew Chafin escape.

And Chafin was rewarded for his efforts with another W. W, as in Welington Castillo, who led off the inning with a double into the gap - I thought for one second, he was going to try for three, but we'd had our daily TOOTBLAN (possible assist to MLB in New York), and a wiser head prevailed. Chris Owings then failed to get a bunt down; he atoned for this by singling, to put runners on the corners with still nobody out, though after the previous inning, you could be forgiven for thinking, "How are we going to screw this up?" The answer: not at all. Pennington lofted a ball plenty deep to left, allowing even a catcher like Castillo plenty of time to run home and trigger our third walk-off celebration. 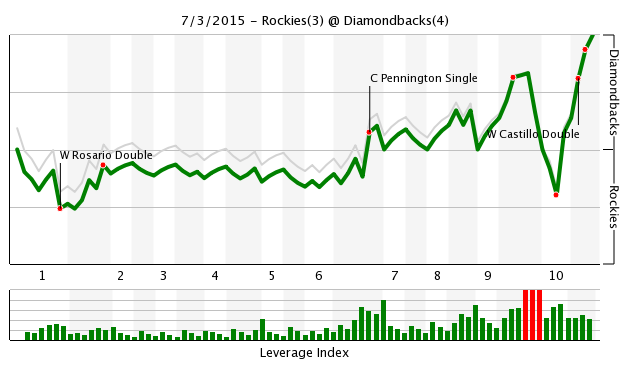 you miss on 100% of the prospects that you trade away

With losses to the Dodgers and Giants, we close the gap on them, and the win guarantees the D-backs at least a split of the four-game series, and keeps alive hopes of... well, y'know... It's back at Chase tomorrow, for the third game, which will also see the return of Patric Corbin to a major-league mound for the first time since September 2013. It promises to be quite a game, but will have some way to go, to improve on the highs and lows provided by this one.