The Week in Diamondbacks Tweets

Randy Johnson's Twitter account is dead, but may its avatar forever live on... After a week off for Mexican purposes, we return to the world of social media!

Share All sharing options for: The Week in Diamondbacks Tweets

The Big Unit is officially a Hall of Famer. #RJ51HOF pic.twitter.com/75vpL2qCZt

FWIW, I wasn't trying to "burn" anyone. Just providing evidence to a group of people who were trying to make it seem that it's only us

As juvenile as everyone may or may not think it is, it's not going anywhere anytime soon no matter how many times you tweet about it

@Dbacks @lnorto5 I'd go with the Churro Dog. Churro Dogs don't make you sleep on the couch when you buy too much at the Team Shop

Not letting my son buy that Tulo / Rockies jersey in Denver a few weeks ago proves to him I might just know what I'm doing.

And, finally... Hmmm. The SnakePit lawyers will see you now! :)

Well, at least Dominic Leone didn't get a fist bump from the manager when he returned to the dugout.

And somewhere men are laughing, and somewhere children shout; But there is no joy in Arizona - the mighty #Dbacks have struck out.

A lot of "sirs" and "ma'ams" in Godley's postgame media scrum. He obviously hasn't met many of us yet.

I hate it when cheaters prosper like @Brewers #RyanBraun has. Disgrace to the sport. #ScrewTheCrew Go @Dbacks

Tonight is Randy Johnson hall of fame bobblehead night at chase field. You will probably never hear from me again after this tweet.

The guy behind me just told his son they boo Braun because he hit a home run once. Yeah I'm sure that's it

My mom and I somehow keep ending up at the longest dbacks games. Almost three hours and still on the seventh.

Well, among things we already knew: Jake Lamb is as cool as a cucumber. In an ice bath. In a freezer. Wearing sunglasses.

It's gotta be surreal for @JakeLamb18 to come home, stay at his parents' house & pick up the morning paper. So cool. pic.twitter.com/u5IN0IJ9FP

@michaelduterte I should RT this cc: the players' union

other than platform & paychecks, the line between inflammatory sports radio personalities and Twitter users w/ egg avatars is what exactly? 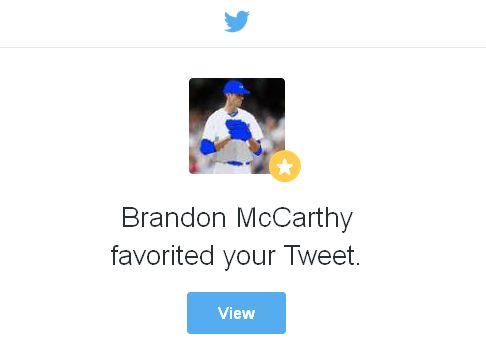 Okay, shut it down - I can officially retire from the Twitter now...