At Cooperstown,. New York, this afternoon, the Big Unit entered the Hall of Fame, becoming the first player to do so as a Diamondback.

Share All sharing options for: Randy Johnson enters the Hall of Fame

It's the first time I've ever watched a Hall of Fame induction ceremony in its entirety, though even here, I must confess to paying a good deal less attention to the other candidates than to Johnson. It was certainly an impressive class, both in quantity and quality.. You have to go back a full 60 years to find the last time that four players were elected in the same season, and even there, all of those chosen were on the ballot for between their fourth and sixteenth time (this being before the 15-year rule was instituted). This time, three out of the four - Johnson, John Smoltz and Pedro Martinez - were first-ballot Hall of Famers, with only Craig Biggio a holdover from previous year.

"So many of the reasons that I've been inducted into the Hall of Fame are long gone now. My fastball is gone. I no longer have a mullet. And my scowl is long gone."-Randy Johnson

Interesting to contrast the different styles and approaches of the speeches given by the four inductees. Biggio went first, and began choking up almost immediately, causing Mrs. SnakePit to exclaim, "There's no crying in baseball!" Smoltz went for a more light-hearted approach, at one point donning a large wig, but probably went on too long. It was, appropriately, like watching a Jeremy Hellickson start; you would drift off to do something else for a bit, then come back and find yourself thinking, "Hang on, he's still speaking?" I did enjoy the accordion references, however, and his warning of the dangers from young pitchers being overused.

Martinez perhaps received the loudest ovation from the Cooperstown crowd, estimated at 45,000 in number.. Like all the inductees, he mentioned the other three players going into the Hall of Fame beside him, calling Randy Johnson his "brother from another mother"! Unlike the others, he seemed to speak without notes, switching from English to Spanish and back again, and finished by calling up fellow Hall of Famer Juan Marichal to unfurl the Dominican flag, perhaps a pointed jab at the idiotic remarks of Colin Cowherd [oh, look: an NFL fan says something dumb about baseball. This is my unsurprised face] 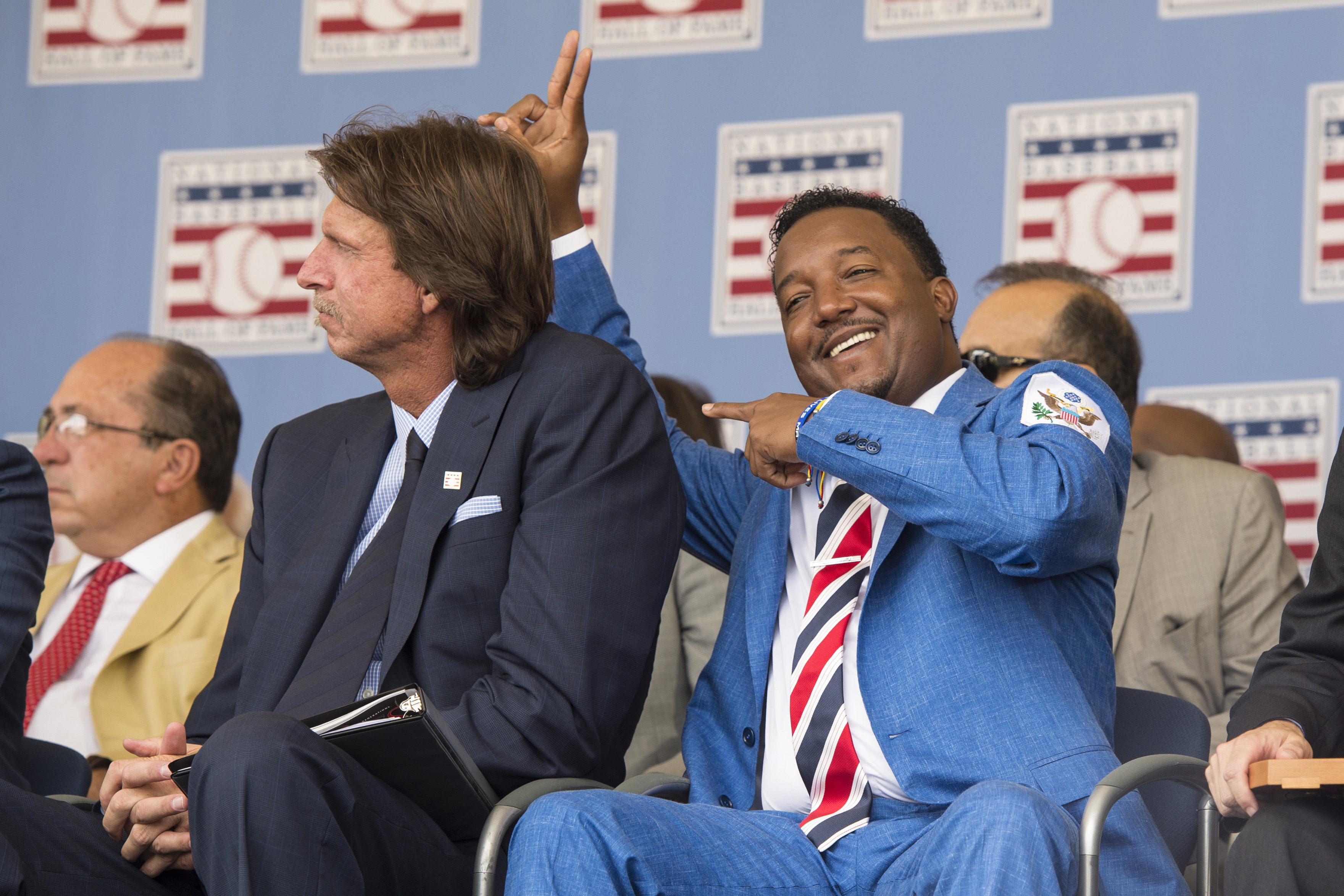 But it was Johnson for whom I was watching, and wasn't disappointed. The Big Unit has always been a private person, introverted and intense. The contrast to Martinez could not have been more marked, and it was clear that Johnson was not as comfortable or at ease, as someone like Smoltz, who has made a post-playing career in the media; Randy's chosen art-form, photography, is almost a solitary pursuit. So, after a solid tribute video from former manager Bob Brenly, Randy didn't deliver the most eloquent or grandiose of speeches, it would have to be said. But that didn't matter: for what Johnson may have lacked in polish, he more than made up for, in pure heart.

"Thank you, Mom. You're the Hall of Famer. I love you so much. You're the most important person in my life." - Randy Johnson

That came through the most when speaking about his parents. Johnson's father passed away in 1992, so never saw the true ace into which RJ would develop. He did get to see Johnson's no-hitter with the Mariners, and Johnson recalled: "I gave him a call, and he said it was far from perfect -- I walked seven batters. Thirteen or 14 years later, I was perfect, Dad, that one game." Hey, it was actually only six walks that day, Randy: don't be so hard on yourself. He followed with an emotional and touching tribute to his mother, in attendance - a secretary for 25 years at General Electric, she still found time to raise six kids, and make sure Randy got to take part in Little League.

He also commented on his relationship with the fans over the years. "If I was a visiting player coming in to pitch against your team, you motivated me by screaming at me. If you were rooting for me, I would run through a brick wall for you and throw as many pitches as I needed to throw to get that game and get us a victory." No-one who ever saw him pitch for the Diamondbacks would doubt the absolute truth of that statement. And, in typical RJ style, he shone the spotlight elsewhere, playing tribute to US troops and acknowledging their service - both USO and the Wounded Warriors Project are big parts of Johnson's charitable work.

It was a memorable event, even experienced second-hand through television; I know we had at least one SnakePitter in attendance, and I look forward to reading their account of proceedings in due course. Of course, the honors don't stop here, with Johnson's #51 due to be retired in a couple of weeks at Chase Field. I'm sure Randy will be looking forward to that, particularly because he probably won't be expected to give a 20-minute speech for the occasion! But this was an honor truly well-deserved, and I can think of no-one better than Randy Johnson, to become the first Diamondbacks in the Hall of Fame. 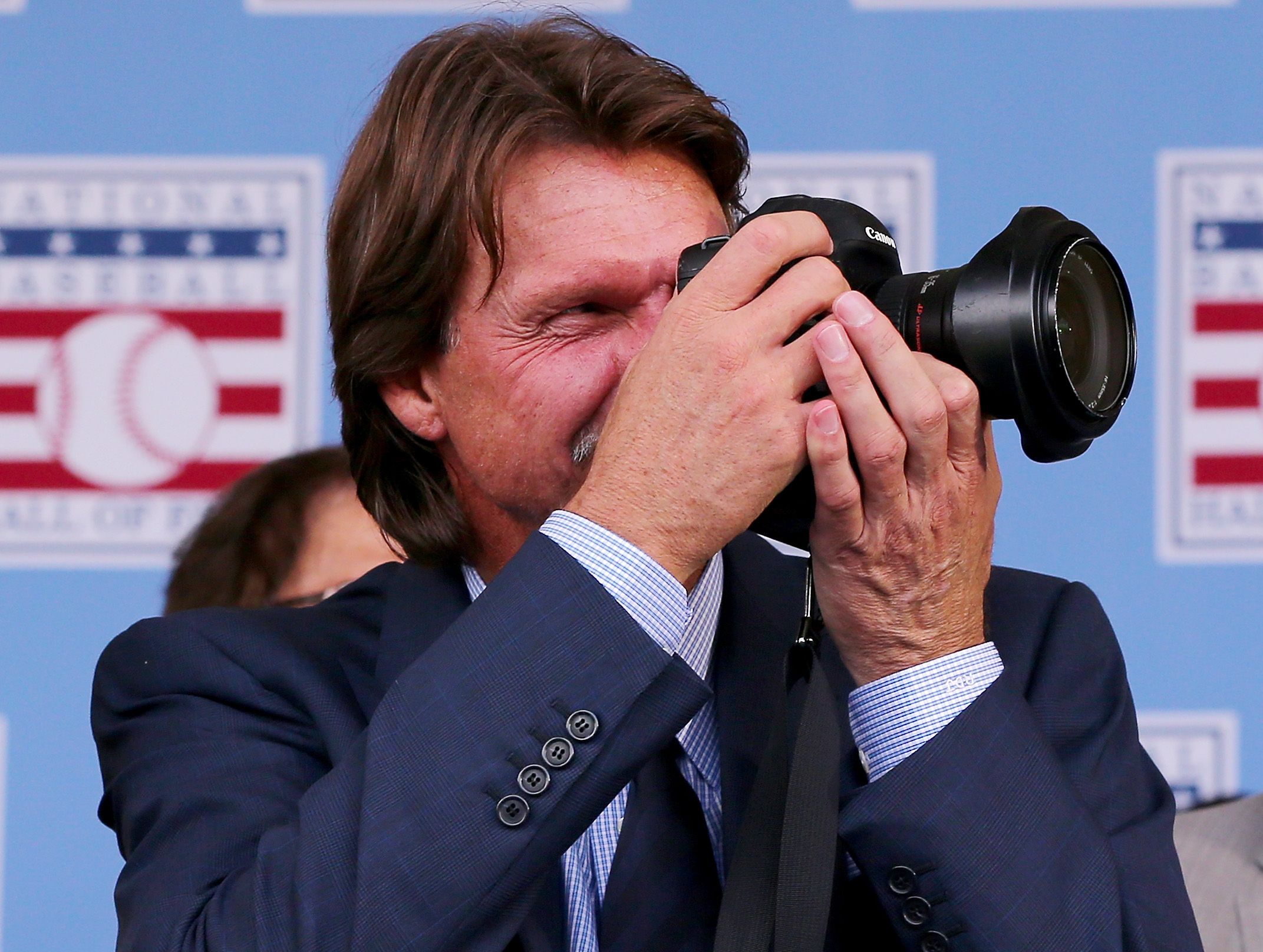