Ingredients: speculation, vagueness, uncertainty, traces of bet-hedging. Produced in a facility which handles peanuts. And certainly consumes them.

[In case you're wondering what the hell this is... Myself and Mrs. S are having a rare Saturday night out, and apparently, so are all the other SnakePit writers. Rather than leave you entirely stranded, we bring you a generic recap, featuring a best guess at things that may have happened in a game this season. With due acknowledgement to Azreous's infamous Mad Libs recap, though this one is more a function of necessity than artistic license!]

The Diamondbacks faced the [insert team] at Chase Field tonight, before a crowd of . Starter [insert pitcher] had been having his issues with the long-ball of late, and also been prone to the big inning. Tonight, . He left the game and , before turning things over to the bullpen. The relievers took it the rest of the way, with the pick of the bunch, though continued to struggle, and you wonder whether a roster move might be in the offing, as the Diamondbacks look to shore up their taxed bullpen.

On offense, the Diamondbacks relied heavily, as ever on Paul Goldschmidt, who reached base and drove in his RBI with a . He did get support from , who had , but Chris Owings struck out times, and committed a TOOTBLAN. Nick Ahmed made some slick defensive plays, because that's what he does.

All told, this contest was , and Chip Hale certainly has plenty to think about tonight as he . The same two teams meet again tomorrow at Chase Field and the Diamondbacks attempt to . Join us, why don't you, for what is sure to be . 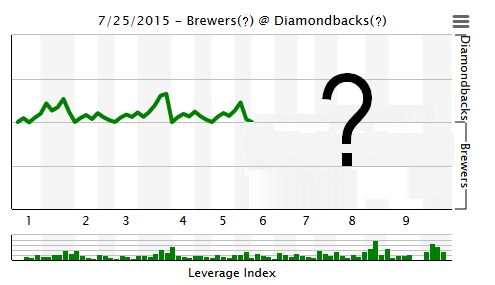 [Click for details, at fangraphs.com]
A good Diamondback. Probably Paul Goldschmidt: +some %
Other decent Diamondbacks; +not quite as much %
A Diamondback in whom we are severely disappointed: -a significant %
Underwhelming Diamondbacks: -something or other %

Assuming he was there, AzDbackfanInDc will be the most prolific commentor, and I don't even need to have a drop-down list for this. Failing that, or occupying the minor spots, probably some combination of GuruB and preston.salisbury. Maybe Dbacksskins, if he's around. Comment of the night? That'll go to asteroid, perhaps for something involving chocolate.

We will be back tomorrow, with our regularly-scheduled recappage. For now, this is a virtual Jim wishing you good night, the real one already being far, far away from a keyboard!