Of course, we couldn't have a series against the Brewers without a beer-cap, could we? And we even have found an appropriately beer-cappy picture to go with it....

Share All sharing options for: Diamondbacks 1, Brewers 2: Beer Before Convention-Cap

The eighth inning was worked by Daniel Hudson, who put up a zero, and the ninth by Brad Ziegler, who did not, as a single came around to score on a sacrifice, a ground-out and a wild-pitch. It was the first run charged to Ziegler since June 3, and I can't help wondering if it also being the first time Oscar Hernandez had caught Ziegler, might have played into this a bit. It proved a huge insurance run, as Chris Owings lead-off triple in the bottom of the ninth, came home one out later on a sacrifice fly by Nick Ahmed, but Welington Castillo grounded out, and the game was lost.

Ender inciarte had a good game, getting three of the Diamondbacks eight hits; Paul Goldschmidt reached base three times, on a hit and two walks, and Hernandez got a hit and a walk. But we went 0-for-5 with runners in scoring position, and most credit likely goes to Corbin, who tied a career high with ten strikeouts, and even though this was the Brewers, showed further palpable improvement on his return from TJ. That's some comfort to take away from a defeat which is all the more irritating for getting more hits and striking out fewer times than the opposition. 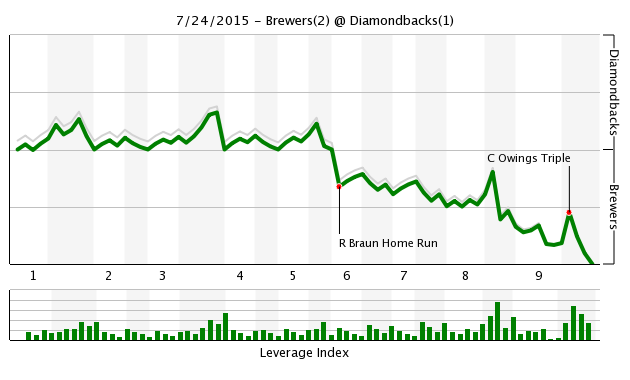 Tomorrow, we'll see if the offense shows up. Rubby de la Rosa starts for the D-backs, on Randy Johnson Hall of Fame Bobblehead Night at Chase.