Baseball is not just an American game. As we found out, unexpectedly, in Rocky Point earlier this week.

You'll have noted my absence from the 'Pit earlier this week. Mrs. SnakePit and I headed to Rocky Point, partly for our anniversary, partly to scope out the location for the SnakePitette's intended wedding next year - she and her fiance accompanied us. This was intended to be two entirely baseball-free days, but it didn't quite work out that way, as on the way into town, we noticed the Estadio de Beisbol Francisco Leon Garcia. [Note: I have been unable to discover who Francisco Leon Garcia is, or why he deserved to have a park named after him] Turns out, since 2011, it has been home to the Tiburones de Puerto Peñasco - the Rocky Point Sharks.

They are part of the Liga Norte de México, a minor-league for the Liga Mexicana de Beisbol, playing in summer, as opposed to the winter ball of its parental organization. Eight teams take part, including the Diablos de Hermosillo. whose home park was the setting for a spring-training game this year, between the D-backs and the Rockies. Each LNM team is affiliated with one or two of the LMB teams; in the case of the Tibruones, those are the Acereros de Monclova and the Vaqueros Laguna. Those team names translate as "Steelers" and "Cowboys" respectively, which must make water-cooler conversation confusing: "What about them Steelers, eh?" "No... The other Steelers..."

The regular season runs from April through July, then into a post-season. The champions then took on the winners of another minor league, the Liga Norte de Sonora, but that went on hiatus this year for financial reason. The Diablos were part of it - indeed, were the reigning champions - and transferred over into the LNM for this season. The eight teams play a total of 88 games, the season divided into two halves: points are awarded for each position in the standings in each half, from eight for the winner, down to three for last-place, and the combined tally is used to determine seeding for the six-team playoffs. 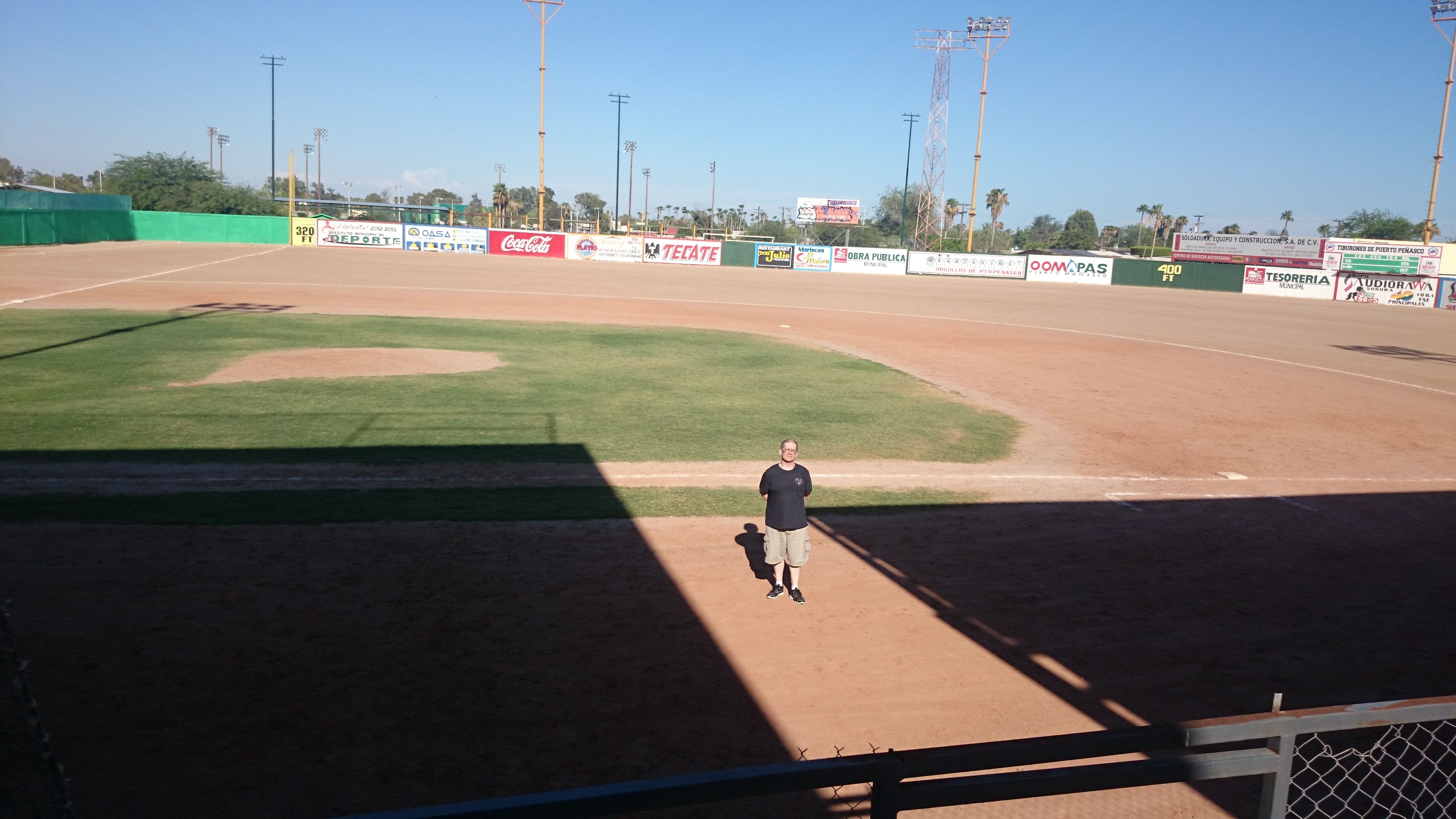 [Inside the park - notice the all-dirt outfield]

I guess what they save on upkeep is passed on to the consumer, as tickets for the games are dirt-cheap by US standards, even minor-league ones. They cost as little as 45 pesos - that's $2.79 at the current exchange rate - or if you want to splash out for the expensive seats, go up to the dizzying heights of 75 pesos, $4.66. We'd just missed out, as the Diablos had been in town over the weekend for a three-game set against the Tiburones. Unfortunately, it appears that there would be no live baseball for us, for Sunday was the last home game of the regular season, with the Tiburones finishing off the second half with a road set of three contests, back in Hermosillo.

Still, I figured I'd try to pick up a Tiburones shirt or something; getting a local sports team jersey has been a habit on holiday, from places as diverse as Montreal and Budapest. The tourist area around the fish market proved devoid of merch, but we were told there was a team shop at the park, so before dinner, headed out that way. We arrived to discover a heap of kit-bags outside, with the team preparing to hit the road to Hermonsillo, and that the store only operated on game days. But Mrs. SnakePit (who speaks fluent Spanish) was undeterred, and struck up a conversation with Armando Sanchez

Mrs. S is still a bit vague on his role, but when Armando learned of our quest, he suggested we take a shirt from the pile before us - so maybe equipment manager? While appreciated, that seemed a bit pillage-y, so we declined, and he instead said he had previous jerseys at his house; while he had to leave, if we came back in a bit, his wife would take us to get one. I wasn't sure if this was a polite way of getting us gringos out of the way, but what had we to lose? We went off on wedding-planning business for a bit, heading back just in time to see the team bus leave in a cloud of dust. But, wait! For in a car was Mrs. Sanchez and Sanchez Jr, who told Chris to follow her back to their house.

Now, I don't know if you've driven much in Puerto Peñasco, but it's an experience. Nothing Six Flags or Universal Studios has can compare in terms of gut-clenching terror, between the speed-bumps (intentional or the results of an apparently non-existent maintenance budget), ALTO signs that seem to leap out of nowhere, and other drivers, many of whose vehicles stand testament to previous close encounters of the collision kind. Naturally, at an intersection, a car pulling a boat came between us and Mrs. Sanchez, so we had to try and steer around that too. I think our "Wanted" level in GTA: Rocky Point had gone up several stars by the time we pulled up at a house.

Mrs. S went in to complete the transaction (which consisted of a virtually token amount of money being refused, and pressed into hands!), with the fiance working bodyguard duty. I remained outside to ensure the SnakePitette was safe. That is my story, which I am sticking to, and will not stand for scurrilous suggestions otherwise. But just as I was getting nervous, wondering what was Mexican for "911", they returned with a pair of broad grins... and a shirt. Mrs. S had been chatting to her very friendly wifely counterpart ("Your husband drone on about baseball all the time too?"), and also the son, who was a pitcher and catcher - a bit of double duty we could use! - for a local youth team.

It was all a unique, somewhat surreal experience, both uniquely foreign and yet, proof that baseball can bridge gaps across national and cultural boundaries. While the shirt (below) is way cool, it will be the story that goes with it, which will stick on our minds, long after the jersey itself has fallen apart at the seams. Vamos, Tiburones!