Jar-Jar Binks? Caravan of Courage? The Christmas Holiday Special? Which aspect of the Star Wars universe did tonight's Diamondbacks' performance most resemble?

Share All sharing options for: Diamondbacks 4, Giants 8: Bad feeling about this, fully endorsed.

I'm more or less of the opinion that there is no such thing as a "bad" baseball game. It's always fun to go to the park, hang out with friends, chat and drink beer, regardless of the result. That said: Christopher Columbus on a cross, this was a chore of a game to sit through. Three hours and thirty-eight minutes of slow, creeping defeat, which was inevitable by the middle of the fourth inning, when San Francisco had taken a 7-1 lead and chased Anderson [hohoho] from the game, on his way to another drubbing. However, it felt inevitable a lot earlier, probably when a throw home skipped past Oscar Hernandez in his debut major-league start, to give the Giants a 2-1 lead.

Things had started well enough: Mrs. SnakePit and I arrived at the park, secured our A.J. Pollock bobbleheads, and settled down in the Draft Room, where we hung out with asteroid until it was time to go down to our seats. After the first two Giants reached against Anderson, a conveniently lined double-play defused the threat. The SnakePitette, who had got stuck at work, and her fiance arrived just as the standard D-backs offense showed up in the second inning: David Peralta tripling. He came home on a Chris Owings single, and we were 1-0 ahead after two. If proceedings had been frozen in carbonite like Han Solo at that point, I think we'd all have been a lot happier.

It was not to be, beginning with a single off Anderson by his opposing number to start the third. On the third further single, Hernandez failed his first test as a major-leaguer, when he could not corral a throw home from Ender Inciarte. By the time the inning was over, the Giants were 4-1 up. They'd add three more next time, and Anderson's night ended with an ugly line of seven runs in 3.2 inning on ten hits and a walk with three K's. While he was BABIP'd, to the tune of .556, and didn't allow a home-run - all ten hits were singles, in fact - the wheels have fallen off Anderson over the past month. In five starts, he has thrown 25.2 innings, and allowed 26 earned runs, a 9.12 ERA.

This left the bullpen with another long day: after working seven last night, they had another 5.1 innings today, though with one exception, handled it well. Josh Collmenter threw two hitless innings, though did walk the bases loaded in the first of those, and Oliver Perez retired all five of the four batters he faced [he came in with the bases loaded in the seventh and got an inning ending double-play]. The exception was Enrique Burgos who followed up last night's stinker by getting one of five batters out, and required Perez's help in a huge way. In the second half, Burgos has worked one inning, allowing six hits, a walk and four earned runs. He may not be around long.

Meanwhile, the offense teetered on the edge of a come back, never getting the big hit to make a significant dent in the deficit. Hernandez did get his first hit in the fifth, a double down the left-field line, and scored on an Ender Inciare single. Peralta smacked homer #9 in the sixth, and Cliff Pennington came off the bench with his first homer in the seventh, but both were solo shots. While Paul Goldschmidt came up twice with a pair of men on base, he came up empty and went 0-for-4 with a pair of strikeouts. Inciarte had three hits, Peralta two, while Pollock and Chris Owings each singled and walked. The key difference was, we were 2-for-7 with RISP; the Giants were 7-for-16.

The defeat was the Diamondbacks' fifth in a row: if our last victory seems a long time ago, that's because it was, all the way back on July 8. It'd be hard to say the team was ill-served or has played better than the opposition in any of those: it certainly hasn't been the case in these two games. The early deficit pretty much destroyed any enthusiasm for the decent (37,609) crowd at Chase, the middle innings playing out as background to a buzz of disinterested conversation. The highlight was perhaps the debut of the "Simba Cam", encouraging parents to hoist their offspring over their head, a la Lion King. I predict this will last until the first child is dropped, and a lawsuit follows. 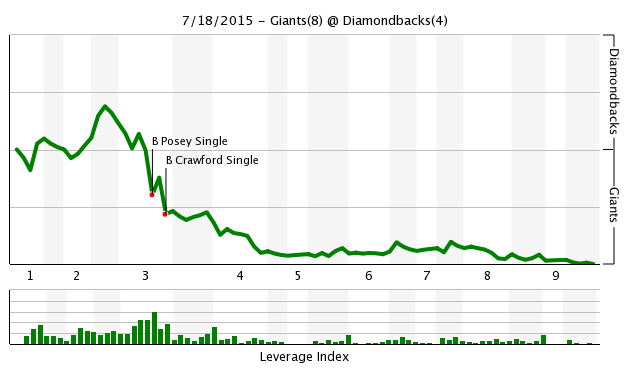 Yeah, not really my idea of fun, and an early 7-1 deficit sucked the wind out of the Gameday Thread as well. AzDbackfanInDc, preston.salisbury and GuruB led the futile charge, with the other brave souls taking part were: DeadmanG, Jim McLennan, JoeCB1991, Majabe, Makakilo, Nate Rowan, SenSurround, Xerostomia, Xipooo, asteroid, benhat, freeland1787, gamepass, hotclaws, noblevillain, onedotfive, piratedan7, , shoewizard.  Comment of the thread to Xipooo.

Could be worse. Cody Ross could still be on the team.

The more I complain the less people listen. I refuse to see any correlation.

So, there's that... We'll try and avoid beginning the second half in the same way we ended the first - by getting swept - tomorrow afternoon in the series finale. To do so, however, we'll have to go through the Giants' ace, Madison Bumgarner. Hopefully Patrick Corbin can go more than five innings, but given his limited pitch count I would not necessarily bet on it. But a new hope, eh?