The Diamondbacks before and after the All-Star break

What does history tells us about how Arizona's first-half performance is tied to their second-half results?

Share All sharing options for: The Diamondbacks before and after the All-Star break

Based on the historical record, the bad news is. the Diamondbacks can just about kiss a post-season berth goodbye. Since they came into being in 1998, just two of the 234 teams to have reached the All-Star break with a losing record, have still gone on to make the post-season. The 2003 Minnesota Twins went 44-45 in the first half, then won two out of every three games the rest of the way to take the division by four games. And we probably remember the others: that would be the 2008 Dodgers, who went 38-29 after the All-Star Game, to win the NL West, after trailing the Diamondbacks by 4.5 games as late as August 29. That was fun.

So, I guess what I'm saying is: yes, there is a chance. It's just not a very good one. And I'm perfectly fine with that. I still suffer PTSD - that's Post Towers Stress Disorder - induced nightmares, in which Dave Stewart and Tony La Russa decide we are just one piece away from contending, and trade the farm for Mark Trumbo. On that basis, hovering somewhere just below .500, and with a record against winning teams that demonstrates this is still a work in progress, is by no means a universally bad thing. It will hopefully prevent us from charging toward any false mirages of immediate contention, in favor of a more sedate and sustainable pace.

Still, though it might be interesting to go back and look at where previous Diamondbacks teams have stood at the All-Star break, and how that factors into what they did in the second half of the season. So, below is a table summarizing our wins and losses in each half, along with the resulting win percentage, and the difference between the two parts of the campaign.

What we see is that first-half performance is a pretty good predictor of second-half numbers: over the 17 completed seasons, our post-break win percentage is just .008 higher than that before the time off. Of course, there are some sizeable differences in individual years, as you'd expect. The biggest improvement was the 1999 team. They were already pretty decent to start with, but blew away the competition in the second-half on their way to the franchise's only 100-win season. The .712 W% posted, to this day, remains the best by any National League side over a (completed) second half, since the 1993 Braves (54-19).

It's interesting that they were not able to repeat the feat the next year. Indeed, the 2000 Diamondbacks suffered the greatest implosion in team history. They led the division by 3.5 games at the break, yet were unable to sustain that, and finished a full dozen games back of the Giants. [And you thought the 2008, with its mantra of "At least the Dodgers lost, too!" fizzled out disappointingly...] The best first half is a tie between 2001 and 2002, both of which saw Arizona go 51-36. As for worst, 1998 just edged out 2004 for the most wretched pre-ASG performance, but the latter's awfulness after the break is the lowest W% by an NL side in fifty years (the 1965 Mets went 21-56). 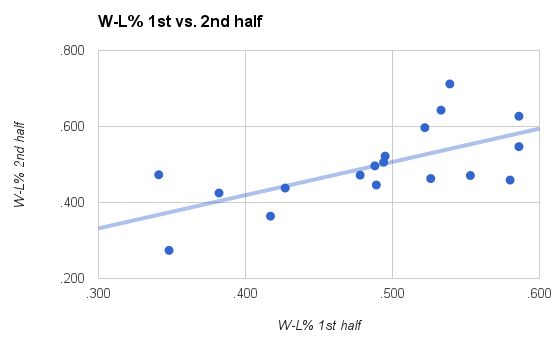 You can see based on the "best fit" line, that there is an unsurprising correlation between how teams do in the two halves of the season. Do well early, and you're more likely to do well late. However, the angle of the line is perhaps a bit flatter than you might have expected. There may be some kind of regression at play, with teams tending to regress toward .500, regardless of whether they were above or below it. On that basis, the Diamondbacks seem most to play just below an even record, as they did in the first half. But there is a wide spread - almost 300 points -  between the biggest improvement and the worst implosion.

If we match the former, that would give us a win percentage of .650 in the second half, giving us 49 wins and a total of 91, which might well be enough for us to reach the post-season. So it's not impossible. It is, however unlikely.  The next-best improvement would leave us at 88 wins, which I don't think will be enough. The largest turnaround since 1999 was 2011's 110 points, and that would lead to only 86 wins: almost certainly short of a playoff spot. The bottom line is, for the team to reach the post-season this year, the Diamondbacks will have to manage a bigger improvement in the second-half than they have managed in any of the last 15 seasons.

I say this, not in the interests of being a Debbie Downer: few, if any of use, seriously expected before the season that we would be in 2015 contention, and I am currently quite happy with the progress made. I'd be delighted with a .500 season overall. That would need a 39-36 record the rest of the way, an improvement of a mere 37 points over where they currently stand. That level of improvement has been achieved six times in the 17 previous yeas by the Diamondbacks, so seems a much more reasonable and achievable goal.