The long ball haunted the Diamondbacks for the third game in a row as the Mets, led by a 3-homer game from Kirk Nieuwenhuis, hit four more home runs to finish off a 3-game sweep of the Diamondbacks.

The Diamondbacks' offense, despite getting only 5 hits on the day, had the tying run at the plate in both the 8th and 9th innings but couldn't get that much needed clutch hit.

Starting pitcher Ruby De La Rosa couldn't get out of the 4th inning after allowing 8 hits, 3 of which were home runs, walking 2 and allowing 4 runs.

The bullpen was outstanding, as it has been in all three games of the series. Four relievers combined to allow only one run, another home run, over the last 4 1/3 innings to keep the Diamondbacks within striking distance.

Coming into this Mets series having finally reaching the .500 mark for the first time since April, there was obvious excitement heading into the All-Star break. That excitement, however was short lived as the three starting pitchers combined for 13 innings and allowing 8 home runs and 12 of the 13 runs the Mets scored in this series,

The Diamondbacks will be back after the All-Star break Friday night with a 10-game home stand starting with three game sets against the Giants and the Marlins followed by a four game set against the Brewers. The starting rotation will come back in a different order, as Robbie Ray will pitch the 1st game, followed in order by Chase Anderson, Patrick Corbin, Ruby De La Rosa and Jeremy Hellickson. 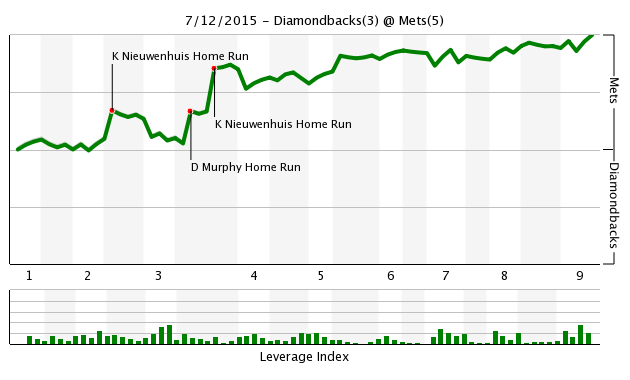 In a shocking turn of events, AzDbackfanInDc was not the afternoon's busiest commenter. He was beaten into second by freeland1787, with preston.salisbury coming in third. Joining them in closing out the first half of the season were: Angry_Saguaro, Clefo, Dbackguy, GuruB, Jim McLennan, JoeCB1991, Majabe, Makakilo, SongBird, asteroid, cheese1213, circa4, ford.williams.10, gamepass, hotclaws, noblevillain, nolanriley13, onedotfive, piratedan7, shoewizard and xmet. Comment of the thread to hotclaws, for her suggestion after freeland confessed the D-backs are 0-7 when he can't watch.

Strap a TV to your face

The disappointing series ends the first half for Arizona, who now get four days off (with the exception of Goldie and A.J. Pollock), as the All-Star Game festivities takes place. We'll be covering events both tomorrow and Tuesday, so stick around the 'Pit for that. Thanks to dbackguy for his guest recap, and here's to the second half going better than these last three games.