You might be forgiven a sense of deja vu for this one.

The same score, and Hard to say if this game was better or worse than last night's. It followed a similar kinda pattern, with the D-backs jumping out in the top of the first, and the Mets using the long-ball to come back. But this one was probably more irritating, on the basis that the illusion of victory was sustained for a greater time-frame. Yesterday, any expectation of victory was snuffed out in the bottom of the first [hope, of course, continued to linger until Nick Ahmed failed to leg out his pop-up in the ninth]. Today, we were leading this one by a pair, in the bottom of the fifth, and Patrick Corbin was looking very, very good: as in hitting 96 mph, and with a devastating wipe-out slider.

But when it fell apart, it fell apart quickly: three of the final seven batters Corbin faced went yard against him. Easily the worst was the two-run shot given up to his opposing number, Matt Harvey. We've given up home-runs to pitchers before, of course, just not one that was so detrimental to our chances of victory: Fangraphs has it as a -35.6% play, which would blow away the previous worst home-runs allowed to pitchers [the one Ian Kennedy gave up to the Cubs' Paul Maholm in June 2012 was a mere -25%]. A fan leaned over the railing to snag the ball, but the play withstood review, and it probably would have hit above the orange line if left alone. Still, that's indicative of the way this series has gone.

And, just like yesterday, it started well: even better than Friday, in fact. A.J. Pollock drew the first of his two walks to lead off the game, and David Peralta smashed the ball quite some distance to right-center, for his eighth home-run of the year, as the Diamondbacks jumped out on an opposing pitcher early. Unfortunately, as last night, it seemed to backfire; perhaps we need to rethink this strategy, and lull the opposition into a false sense of security, with a couple of 1-2-3 innings early on, before we strike. Harvey certainly looked wobbly early on, taking more than 40 pitches to get through the first two frames, sparking hopes of an early exit.

It wasn't to be. For when Chris Owings stole his way into scoring position with one out in the top of the second [followed by a very nice nine-pitch walk worked by Corbin], little did we know there would only be one subsequent Arizona batter to reach second base safely today. We had two-out singles in the third and fourth; left there. Another lead-off walk by Pollock in the fifth; caught stealing second [followed by Peralta's second walk; he was that other RISP guy, advancing to second on a ground-out]. And the base-runners who started things in the seventh and eighth innings, were both erased by double-plays, as we sent the minimum to the plate over the last four innings.

Corbin looked very good early on: I don't know whether the implosion from the fifth inning on was fatigue, because he had been extremely efficient to that point, needing only 45 pitches to get through four, on just one hit with five strikeouts, including a fanning of the Mets in order for the second inning. There was some discussion in the Gameday Thread about whether someone should have been warming up in the Arizona bullpen, but given how quick and effective Corbin had been to that point, I can see why there hadn't been. He left after another home-run to open the sixth: his final line was four runs in five innings on four hits and a walk, with five K's. Three of the four hits allowed were homers.

As yesterday, the bullpen kept the Mets off the board the rest of the way. Randall Delgado worked 1.2 scoreless innings, followed by Oliver Perez (again receiving a warm welcome from the Citi Field faithful, clearly remembering his time with the team - I think Hale using him in both games probably counts as trolling the locals). Enrique Burgos finished things off in the eighth with a perfect inning, but there wasn't even a peep of a comeback from Arizona in the ninth. Our last three hitters went down in order, Jarrod Saltalamacchia coming off the bench to strike out for the full-stop on the day, our ninth K.

The Diamondbacks were held to five hits - that's actually one more than the Mets, but only one of ours left the park. Peralta and Pollock each drew a pair of walks, the latter along with his home-run. Cliff Pennington got a couple of hits at the bottom of the order, Paul Goldschmidt went 0-for-4 with a pair of K's, and seems to be pressing: since last Saturday, he's 4-for-23 with 10 strikeouts. The defeat means the D-backs will be below .500 at the All-Star break, but nothing new there. In the dozen seasons since 2003, we have been above .500 only three times, in 2007, 2011 and 2013. Perhaps also worth noting: every playoff year, we've been above .500 after the first half... 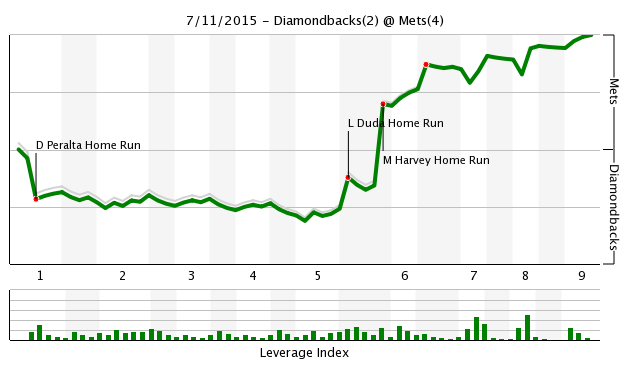 Growing up on Long Island

I watched the Mets mostly, and Kiners Corner was a favorite post game show. Kiner, Lindsey Nelson, and Bob Murphy were the announcers on WOR channel 9.

Moved to Asia when I was 19, and started following D Backs in 99 when they got RJ. I used to watch him all the time when I went on summer vacations up in Seattle area before that.

Moved to Arizona in 2000 and just immediately adopted the home team as my team. Many people wondered how I could switch teams like that. But baseball is an every day sport and back pre internet days it became hard to stay connected to the Mets while living in asia. So when I went to AZ, and started going to dozens of homes games a year and watching on TV all the other nights, the conversion seemed natural.

I’ll never forget a series in early 2001 the Mets came in, and I was wondering how I would feel. But once the game started, my heart told me how I felt right away. I was a D Backs fan.

May not have been the most rec'd, since people were already checking out of this game, but hey, he put some effort into it. :) Hopefully the team will do likewise tomorrow, and not send us into the All-Star break on a three-game losing streak. Rubby De La Rosa starts for the D-backs.