Share All sharing options for: Diamondbacks 2, Mets 4: Well, this sucks

Rather than representing another rung up the ladder for us, this evening's game in New York proved to be a painful reality check, as the Diamondbacks offense was cut down like so much fresh hay by Noah Syndergaard. The brief hope of an early lead proved to be a short-lived mirage, as Chase Anderson's struggles with the long-ball continued during a four-run first inning for the Mets. The way Arizona was swinging the bats tonight, they could continue hitting through the rest of the weekend without scoring four runs. This game not being televised on Fox Sports Arizona probably counts as a mercy, rather than any kind of issue.

And it began positively, too. A.J. Pollock doubled and stole third; one out later, Paul Goldschmidt brought him home with a sacrifice fly, and the D-backs had a one-run lead. Surely that would be enough, against a team who came into this one having scored the smallest number of runs in the National League, with an average of just 3.45 per game. Unfortunately, they cruised past that number in the bottom of the first inning alone, with some two-out thunder. There was a man on first when Anderson recorded the second out, but a walk and a long three-run homer shattered any early complacency we might have been feeling. The Mets then added on, going back-to-back, for a 4-1 lead after one.

We were then reminded what it was like to face a good pitcher, after the break we enjoyed from that during the series against the Rockies and Rangers. From Yasmany Tomas's two out single in the first, through the end of the seventh inning, the Diamondbacks sent 22 hitters to the plate. They went 2-for-21 (a double by David Peralta and a single by Chase Anderson) with a walk and 12 strikeouts, including an inning when Syndergaard fanned Goldschmidt, Tomas and Jake Lamb in order. He ended up with 13 K's on the night, becoming the first pitcher to have more than 10 strikeouts against us, since Yu Darvish fanned 14 D-backs on August 1st, 2014.

From the second inning on, I suppose you could say that Anderson and the rest of the D-backs pitching staff matched Syndergaard zero for zero the rest of the way. That is probably being "somewhat kind" shall we say, as the number of hits and walks we allowed, as well as the number of strikeouts obtained, showed that not all zero are quite the same. Still, I guess some credit is due for settling in after a bad first, though Anderson's pitch count was hardly economical. He reached 100 pitches just one out into the fifth inning, though deserves credit for staying in the game after being taken down by a hard one-hopper off his leg. Personally, I might have bailed on this one at that point.

Given we will likely have a shortish outing from Patrick Corbin tomorrow, with his pitch count likely not much more than 90, we could probably have done with Anderson lasting a bit longer. He ended at just 4.1 innings, being charged with four hits on eight hits and two walks, with four strikeouts. The two HR allowed gives him nine over his last four appearances, in only 22.1 innings of work. We used four relievers the rest of the way, Andrew Chafin being the best of them, working 1.2 scoreless innings; though all were scoreless, Josh Collmenter looked the shakiest, leaving the bases loaded with Mets in the last of the eighth.

The ninth was, at least...interesting, albeit more in a meaning of the word you would use, when asked to critique a precocious niece's performance art project. Tomas got things going by rapping the ball down the right-field line, where it bounced around the corner. Inexplicably, given his run was entirely meaningless, Tomas opted to try for third where he was called out. However, fortunately for Tomas, review showed otherwise, though I still imagine a quiet word will be had by Dave McKay on the topic of not making the first out of an inning at third - especially when you are down by three runs. Admire the enthusiasm, question the execution.

Lamb struck out for the third time, but Welington Castillo singled through the left-side of the infield, to bring Arizona within two and get the tying run to the plate. Chris Owings grounded out weakly - fortunately, weakly enough he was able to reach first. Nick Ahmed was our final hope and popped up on the infield, only for the Mets' closer to make the most feeble attempt at catching a soft pop fly I've seen in a long time. Unfortunately - and I trust McKay will use this as a teaching moment - Ahmed was basically not bothering to run, and once the ball dropped, it was too late for him to do anything. Instead, the Mets recovered and threw to first: an appropriately crappy ending to a crappy game.

Tomas had two of our six hits, while Castillo and Pollock each had a hit and a walk. Every starter struck out at least once against Syndergaard, and the 14 total strikeouts tied a season high, set against the Dodgers on April 20. It's the first time this year we've fanned a dozen or more times than we walked. Caps duly tipped. 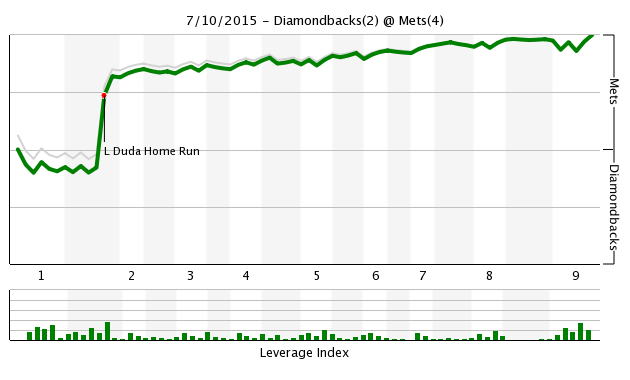 but it was down and away so he missed it

Things don't appear to get much easier tomorrow, as we face Matt Harvey, though it'll be interesting to see how Corbin does. It's an early game, with a 1:10pm first pitch, Arizona time,