It was, in case the headline was unclear, Bark at the Park night at Chase Field. Did that mean the woof was open....?

For reasons I don't want to get into, my enjoyment of this evening's game was rudely interrupted when it suddenly turned into a bout (match? chukka?) of Aussie Rules football, a sport which makes rugby look like a Sunday School picnic. Normally. I'd not mind too much and I would go with the flow - slip another shrimp on the barbie, crank up the INXS, and enjoy me some Antipodean culture - but considering this is my recap night, it does pose somewhat problematic. Not that there was a great deal worth recapping in this one, as the Arizona offense gently slumbered there way through the early going, lulled by the soothing sounds of Bartolo Colon's 87 mph fastball.

The most exciting thing for Arizona fans was a spectacular twin killing turned to end the first inning, which involved Yasmany Tomas as the pivot man. Yeah, you don't often see the third baseman turn a double-play, but it happened here, as a result of the shift put on by the Diamondbacks. Cliff Pennington was the only infielder on the left-hand side of the diamond, made a sprawling dive to snag the ball, then flipped it to Tomas for the first out. Showing footwork like that of a Barcelona midfielder [if you follow Gerardo Parra or Ender Inciarte on Twitter, you'll know what that reference is about!], he stepped away from the slide and fired over to Paul Goldschmidt. Lovely stuff.

Other lovely stuff was, unfortunately, hard to come by. The Mets took the lead in the second inning, with one out, on a solo home-run, but Chase Anderson was, otherwise, his usual effective self - if not, perhaps, quite as economical as the D-backs bullpen would have wanted. The Mets didn't have their first at-bat with a runner in scoring position until one out in the sixth inning, However, Anderson wouldn't escape the inning, loading the bases on a trio of singles, and was lifted for Randall Delgado. He threw 107 pitches in getting through 5.2 innings, so we didn't quite manage consecutive six-inning starts: he scattered eight hits and a walk with six K's, and just the one run.

The offense did their usual disappearing trick, like they do every fifth game when Chase starts. We did get a man to third base in the third inning,. Inciarte singling and then motoring all the way around to third on an errant pick-off throw from Colon, but A.J. Pollock flew out. Tomas singled in the fourth, only to be stranded on second, but we had some buzzard luck in the fifth. Colon walked Welington Castillo - yep, he of the Golden Sombrero on 14 pitches last night - and Cliff Pennington smacked a ball back up the middle that looked a potential base-hit, only for it to carom off the side of the mound, right to the Mets' shortstop, who started a double-play.

It was that kind of night early on, not helped by a strike-zone belonging to home-plate umpire Mark Ripperger which could kindly be described as "unfortunate". It was almost as if he had suffered a slight concussion when clipped by a follow-through from one of the Mets in earlier innings. It was bad enough (as below) that, when Paul Goldschmidt was called out on strikes to end the seventh innings,.Chip Hale apparently said something from the dugout steps, and whatever it was, was deemed sufficient to earn Hale his first career ejection. He should get Ripperger to sign the line-up card or something.

But if he wanted to galvanize the offense: job done. With two outs in the bottom of the seventh, Chris Owings singled, and Castillo got his first hit as a Diamondback: it didn't come back, as Welington gave the ball the boot, a two-run shot to left that gave Arizona a 2-1 lead. It was then up to the bullpen to hold on to the lead, Randall Delgado having done his job by stranding three runners in the sixth, and then working a hitless inning in the seventh. The eighth brought in Addison Reed, and also defensive replacements on the left of the infield, in the shape of Jake Lamb and Nick Ahmed. That proved wise, Ahmed starting off the third double-play we turned on the night.

Unlike last night, we didn't get any insurance runs in the ninth (Jake Lamb took strike three for his first at-bat back), and the ball was handed to Brad Ziegler for the ninth. The first out proved easy, but the second was more difficult, as first a single and then catcher's interference by Castillo led to the Mets having two on with one outs. However, Ziegler gonna Ziegle, and a pinch-hitter hit a hard bouncer high just fair down the left-field line, which Lamb snared, stepped on third for the second out and then fired across to Goldschmidt for the fourth double-play, to take Arizona back to within one game of .500. 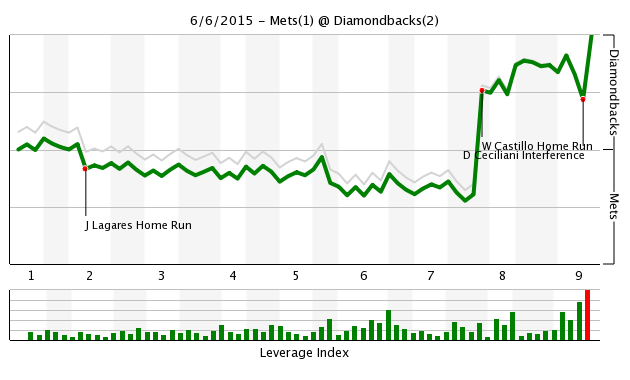 The series finale is tomorrow, at 1:10pm, with Josh Collmenter starting for Arizona. The victory tonight means, if we take Sunday's contest and the series, we'll be back at .500.