We had managed just one home-run over our last ten games and 325 at-bats at Petco. So, of course, we hit three today, and they were responsible for all six of our runs.

The game didn't start well for the Diamondbacks. After we were retired - in order, on eight pitches - the Padres' lead-off hitter greeted Chase Anderson rudely, depositing a no-doubter into the bleachers for a very early San Diego lead. But before you could say, "Drunk Irish lass," the Diamondbacks struck back, taking advantage of a Padres' blunder. Yasmany Tomas should have been retired on a routing ground-ball to third, but it was bobbled and Tomas the Tank came into first-base station ahead of schedule. Jake Lamb then blooped one into left-center, and Welington Castillo clobbered a breaking ball for a three-run homer, his fourth since the trade.

I mentioned in the preview how the home-run rate at Petco has increased this season, whether or not connected with them moving the fences in at various places, over the past couple of winters. While looking at that, I found this piece over at our Fake Teams siblings, which said, "Early afternoon games at Petco... are dangerous for pitchers because the lack of a marine layer early in the day may allow balls to fly further out than usual, leading to more hits and homers." Today may have been a case of a little from column A, a little from column B, as the sides combined to add so many to the 2015 tally, you needed both hands to count them.

David Peralta was the first, extending our lead to 4-1 with a solo shot in the third inning. However, Anderson seemed to be falling behind hitters, and that cost him dearly in the fourth, as he walked the lead-off man, then one batter later, Derek Norris leaned on a fastball to make it a one-run game. We were fortunate to retain the lead in the fifth, as the Padres stranded a man on third with one out, as Jake Lamb was on the spot at the hot corner, holding the runner before throwing to first. And in the sixth, when the Padres went to the bullpen, Lamb got a rare AB against a leftie - his ninth PA of the season - and drilled a two-run shot to right. He may have earned himself more of those.

But, wait! There's more! Anderson's next shot at Norris didn't go any better than the one in the fourth inning, resulting in the sixth souvenir of the day, and cutting the lead to two, with the score 6-4 Arizona. After allowing three home-runs over his first 13 starts combined, Chase has allowed three home-ruins in each of his last two outings. The one in Coors was kinda forgivable; he wasn't the first and won't be the last there. But over the 107 previous games we played at Petco, only one Diamondback pitcher had allowed more than two home-runs. Rodrigo Lopez, somehow, allowed four - and in the old Petco with the fences out - on July 17, 2010.

Considering how little the offense had done for Anderson in many of his previous outings, he was probably due a bit of run support, and outside of the home-runs [okay, that is a bit "And, otherwise, Mrs. Lincoln, did you enjoy the play?"] didn't pitch badly. Two hits that stayed inside the park, and one walk, albeit with just the one strikeout, so BABIP was working very strongly in his favor today. [27 batters faced, 22 balls in play, two hits = .091 BABIP!] Still, we'll take it, especially considering how much troubles Despaigne has given us previously in this park. Anderson threw 90 pitches and was charged with four runs on five hits total.

A two-run lead was then handed over to the bullpen, and didn't lead to too many twitchy moments, with Daniel Hudson working a perfect eighth, although I could have done without him going to a full count on the hitter before Justin Upton. Not a person I wanted to see at the plate, representing the tying run! We escaped that trauma, and Brad Ziegler followed up by notching his 12th save - one off his career high, set in 2013. He did issue a two-out walk to bring that tying run up, then K'd the next guy. His season ERA is 1.41, and he hasn't allowed a hit in 19 of his 33 appearances.

The win returns Arizona to third place in the division, and ends the road trip at 2-4, which is not brilliant, but better than it could have been. It was good to see Lamb produce another multi-hit game, and the team was remarkably efficient, leaving just a pair of runners on base all afternoon. Also, should mention Cliff Pennington's first career start as an outfielder. He wasn't particularly tested in left, though did a good job of ranging over and making a sliding grab of a foul-ball by the wall, late in the game. Not something I want to see on a regular basis, yet I think he'll be okay. Bet you Goldie would be better though. :) 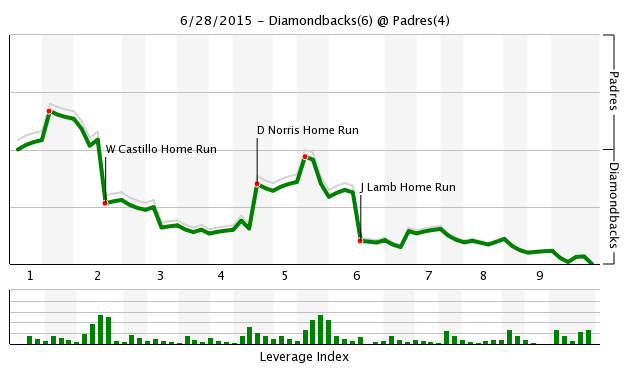 Can't complain too much when the winning pitcher is the most negative Diamondbacks by WP, I suppose. A relatively light GDT,. just over 350, with AzDbackfanInDc coming out of nowhere to claim first, ahead of GuruB and James Attwood. Other seen were: Husk, Jim McLennan, JoeCB1991, Majabe, MrMrrbi, SongBird, asteroid, ford.williams.10, freeland1787, gamepass, globaldistrust, hotclaws, noblevillain, nolanriley13, onedotfive, preston.salisbury, thunderpumpkin87 and xmet. Your Zen Comment of the Thread to hotclaws, for following up on her own comment. Looks like he caught a HR ball in his fast food snack.

It's back to Chase for Chase and the rest of the roster now. A seven-game homestand against the Dodgers and Rockies kicks off tomorrow night, with what appears at this point to be Allen Webster taking on Mike Bolsinger.