Good news! The long nightmare of alternating wins and losses is over! Bad news? Yeah, we lost again.

This was one of those games where I had a feeling of doom from the start. Two batters in, we had a .500 OBP against Tyson Ross, which was a vast improvement on last time, due to David Peralta walking. Then, the unthinkable happened: Paul Goldschmidt hit into an inning-ending double-play. Ok, that's not quite unthinkable, but it is only the third time he has done so in the 73 games we have played. So it's right up there with "A falcon, towering in her pride of place, was by a mousing owl hawk'd at and kill'd," in terms of general ill-omen. It seemed to set the tone for the evening's proceedings, and it didn't take long for the orchestra to stop tuning-up and begin playing.

That would be the bottom of the first inning, where the second Padres to come to the plate, reached base on an error by... Paul Goldschmidt. Whaaaaaaat? This is a man with a fielding percentage coming into tonight's game of .999: 700 chances, 644 putouts, 55 assists, one error. And, naturally, this one immediately came back to haunt us, the next batter cranking a double off the left-center field war, to score the runner who shouldn't have been on base to begin with. Robbie Ray escaped the inning without further damage, and the second was scoreless - albeit, in part because after lead-off hitter Yasmany Tomas walked, he was caught stealing.

In the third inning, the Diamondbacks did strike back, taking advantage of uncharacteristic wildness from Tyson Ross. By that, I mean: Chris Pollock walks. A.J. Pollock walked. And David Peralta walked, loading the bases for Goldie - to that point, Ross had walked five of the 11 batters faced [Chris Owings also stole second, and then strolled casually to third-base, which had been left entirely unmanned by San Diego due to the shift]. Goldschmidt then made Ross pay for this indiscretion, working the count full, then smoothly swatting the ball back up the middle for a two-run single. To no-one's surprise, Tomas ended things by hacking at the first pitch and grounding out weakly.

The lead didn't last long. The Padres singled to start the bottom of the third, with a sacrifice bunt following. Matt Kemp struck out swinging, as the runner tried to take third, but Welington Castillo's throw down to the hot corner was up and in. That might not have been too bad, as Nick Ahmed was covering the play. But the throw glanced just far enough off Jake Lamb's glove, to trundle past the despairing backward flail of Ahmed into the outfield, and the runner came home to score. Things looked like they might get worse, as two more batters reached base, including a rolling ball down to third that just... wouldn't... go... foul, but J-Up took strike three, and disaster was averted.

Or, at least, postponed. San Diego got their lead-off man on board again on the fifth, this time courtesy of a shattered bat bleeder that the runner was just able to beat out to first. He then stole second - the Diamondbacks challenged, but the resulting refusal was almost a foregone conclusion on a night like this [when the Padres used their challenge in the seventh, that call was reversed. This is my unsurprised face]. He was bunted to third, and came home on a sacrifice fly that, it has to be said, A.J. Pollock seemed to catch fairly flat-footed. Ray did suffer no more damage, and left after six innings, having allowed two earned runs (and one unearned), on five hits, with no walks and five strikeouts.

Meanwhile, the offense, having failed to take advantage of the earlier opportunities, beyond Goldie's single, seemed intent on ensuring they would not spurn any more - by refusing to create any more opportunities. After Tomas's ground-out, we sent the minimum to the plate in the fourth and the fifth and the sixth and the seventh [sensing a pattern here?] and the eighth. The only base-runner among 18 consecutive D-backs who came to the plate was a single by Ray, who was immediately erased by another double-play, this one off the bat of Pollock. The streaked ended with a two-out walk to Tomas in the ninth, but Lamb whiffed for the third time tonight to end the game

By that point, the third defensive miscue of the night for Arizona gifted San Diego another run. With two outs in the eighth and a runner on third, J-Up bounced a chopper back to the right of David Hernandez. He dived off the mound, tried to throw from his knees, but airmailed the throw over the head of Goldie: it was scored as an infield single with an RBI, the error letting the runner advance, but that seemed charitable. The saddest stat of the evening may be this: we had fewer hits than errors, managing just the singles by Goldschmidt and Ray, a season low. You won't win many games that way, needless to say. 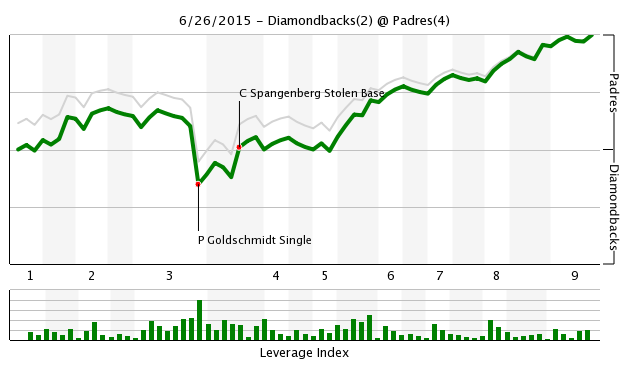 Having rolled down the slopes to the gentle foothills of Mount .500, tomorrow, we will try to do more better, and begin a winning streak to get back there. I previously expressed concern that, whatever way the streak broke, it could lead to a lengthy run, and now it has broken the wrong way, we'll see what it brings. Jeremy Hellickson starts for us, going up against Andrew Cashner, with another 7:10pm start.