Diamondbacks 7, Padres 2: Who's your daddy, Padres?

Truly a refreshing sorbet after last night's rancid milk-shake of a game.

Share All sharing options for: Diamondbacks 7, Padres 2: Who's your daddy, Padres?

In the preview, I said I "would appreciate it if you delivered to me for Father's Day, a nice, stress-free contest, in which the Diamondbacks cruise to victory in a crisply-played two hours, 20 minutes, with a smattering of interesting facts to discuss." Well, I certainly can't complain much. The Diamondbacks scored seven in the second inning and did indeed cruise to victory thereafter, though it actually took ten minutes longer than my requested running-time. I blame the pair of replays in that second inning, both of which went Arizona's way: one ruling standing, and another being overturned. It was that kind of afternoon.

Certainly, if you told me beforehand, that we would have just half as many hits as the opposition, or that the last 17 Diamondbacks to come to the plate, would be retired in order, I wouldn't have held out much hope for the win. But here we are, once again back on the final ascent of Mt. .500. It is something of a franchise first: the team has never scored this many runs, on as few as four hits before - the previous low was five, back in 2007 against the Marlins. It was also pretty quick: the last time we scored seven runs in 2 1/2 hours or less was July 26, 2013, when we blitzed the Padres 10-0 in two hours and 29 minutes.

The other feat that stood out was Jeremy Hellickson being hit by a pitch in the second inning, with the bases loaded. It's only the 20th HBP in franchise history to drive in a run, but the first time it ever happened an Arizona pitcher. It has been more than three years since any pitcher has done it: the last was R.A. Dickey, then of the Mets, when he was hit by Rickie Nolasco on May 12, 2012. The one before that? Former Diamondbacks Micah Owings, who had moved on to play for the Reds, back in September 2009. So it's really not very common: thanks for this game even delivering on the "smattering of interesting facts" element!

Jeremy Hellickson delivered another one of his dollar-store quality starts, though this one was perhaps a little better than most: six innings, two runs on six hits with seven strikeouts and, usefully, no walks. He certainly looked sharp: he was throwing a lot of strikes with his fastball early on, and that then allowed him to get ahead of hitters, and then snap off some sharply-breaking curves and change-ups that clearly fooled the hitters, causing some very ugly swings [much as Tyson Ross did yesterday]. Things did get a little ropey in the fifth and sixth, but he limited the damage well, and certainly deserved the win.

He did take a bit of a beating though; as well as his HBP, he seemed to tweak something when taking his hacks in the final at-bat of the sixth inning. He was lifted for Andrew Chafin, but after the game, Hellickson didn't seem too bothered, saying it'd probably just be sore for a couple of days. We'll see how that develops. with his next scheduled start on Saturday in San Diego. Credit also Andrew Chafin, who pitched three scoreless innings to pick up his first career save, on two hits with a strikeout to get his season ERA down below three. Maybe a candidate for a spot start if Hellickson needs to be skipped? Could tandem him and Daniel Hudson perhaps.

Offensively, we need to talk about the second innings - not least because there was precious little outside of it. Though just about all you need to know is, Yasmany Tomas struck out for the first out of the inning; Yasmany Tomas also struck out for the second out of the inning. In between those two events, all eight Diamondbacks reached base safely, representing eight-ninths of our base-runners for the entire game. We loaded the bases on a pair of walks round a Chris Owings single. Nick Ahmed then grounded to third-base, but the 3B bobbled it, removing any double play chance, and the throw home for the force dragged the catcher off the bag, a call confirmed after review.

Hellickson's hit by pitch made it 2-0, A.J. Pollock then doubled that with an RBI single of his own, and David Peralta reached as the Padres' shortstop let the ball scurry right through him, and what should have been another inning-ending doubly-play became a two-base error. Paul Goldschmidt made San Diego pay with a two-run single back up the middle and then stole second - the initial out call being reversed on review - before Tomas got his second strikeout of the inning and Jake Lamb closed the book. Good thing we scored seven, because our only man to get on base after the second, was Jarrod Saltalamacchia who doubled with one out in the third.

I do suspect the D-backs offensively took they foot off the gas a bit, and I can't blame them. for that. Much as it would be nice to run up the score, and it could have a demoralizing effect on the Padres (whom we'll see again next weeked), it wouldn't make any difference in the standings, and the energy expended might perhaps be needed later in the year. I'm fine with them phoning it in, and Saltalamacchia being the only hitter to reach base more than once [on his own, anyway!], with a walk as well as his double. Save those hits for when we need 'em... Such as when we make another assault on Mt. .500, Tuesday in Coors Field! 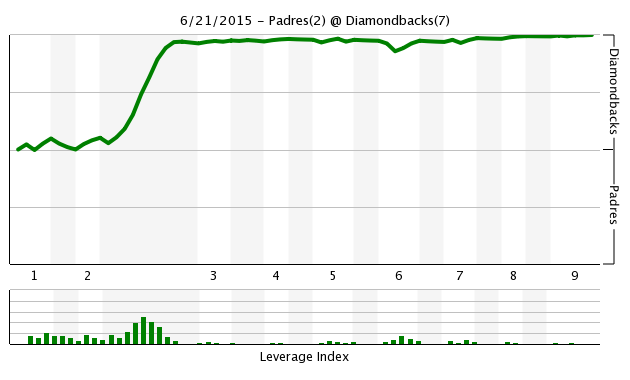 to the Dodgers for salary relief

You probably had to be there.... Off day tomorrow, before the Colorado series starts on Tuesday, and what might be our best shot at reaching .500 yet. Pitching match-up looks particularly favorable, with Chase Anderson going up against Kyle Kendrick, so fingers crossed!