While D-backs fandom prepared to storm the executive offices at Chase Field, there was a game going on inside. It didn't go very well.

Share All sharing options for: Diamondbacks 1, Padres 8: And, elsewhere...

The 9th attempt by Arizona to reach the .500 mark, since the last time we were there, didn't go much better than the previous eight. The margin here was certainly bloated by a four-run ninth inning for the visitors, courtesy of Addison Reed, and starter Robbie Ray didn't have a bad outing. But the offense proved all but incapable of doing anything much against the Padres' Tyson Ross, who took only 111 pitches to motor through a complete game. allowing only four hits and a walk.

Ray certainly has an electric fastball: left-handed starters who throw in the mid-90's tend not to be too frequent. But I'm not sure it's necessarily going to be enough; when you're going through the order for the third and fourth time, he's going to need something else. Preferably, two something elses. Going into tonight's game, he had thrown his fastball more than three-quarters of the time this season, and the ratio looked about the same tonight. The other problem is that when you provide the power, good contact goes a long way: we saw that both in Kemp's solid second-inning double, and Norris's home-run, which landed a long way into the left-field bleachers.

He did get plenty of strikeouts, fanning a career-high seven - he had never struck out more than five before. But it was notable that, as he went deeper into the game, the longer the at-bats became. He seemed to move into more use of his change-up later, but that just wasn't as effective. With two outs in the fifth, he had a long battle with Clint Barmes, which culminated in a broken-bat double. Ray walked the next hitter on four pitches, and that was the end of his night. He went 5.2 innings, allowing four runs on six hits and two walks, but those last two outs took Ray 25 pitches, and he was clearly running out of steam.

Meanwhile, Ross was proving brutally effective, with his slider in particular proving incredibly hard for the Diamondbacks' hitters to pick up. The first two times through the order, we were 1-for-16 with a walk and a sacrifice, Cliff Pennington's single leading off the third inning being our sole hit, and Paul Goldschmidt's first inning base on balls our only other base-runner. Chris Owings did have some bad luck both times up, hitting the ball extremely hard on each occasion, only to see the Padres' third baseman convert them into line-drive outs. The rest of the line-up? Not so much.

We did score with two outs in the seventh. Owings' luck finally changed, and he tripled into center field, and Welington Castillo followed with an RBI double to make the score 4-1 San Diego. Meanwhile, David Heranandez retired all four batters faced (though allowed a runner inherited from Ray to score on a wild pitch), and Randall Delgado followed up by facing the minimum over two frames. However any faint hopes of a late comeback were crushed by Addison Reed, who retired two of seven batters, allowing four extra-base hits, all of which came around to score. Reed's ERA at Chase this year is now 10.22, compared to 1.50 on the road. No wonder he gets booed.

It has to be said, attention in the second half of the game was drawn away, in part by the trade of Arroyo and Toussaint, and partly by my Internet doing an impression of Reed i.e. crapping out entirely. My request for a pinch quick recapper on Twitter generated some scathing responses from 'Pitters there, so I'll turn the rest of this recap over to them:

@AZSnakepit Just post a pic of a dumpster fire

@AZSnakepit Fire Dave Stewart, that's all the recap you need!

@AZSnakepit Reed saved the day! Or not.

@AZSnakepit New regime continues to befuddle, as players get shocked while on the field. Subtitle: Reed is the only constant

And a poignant coda from someone who was particularly blind-sided by tonight's news:

The business side of baseball sucks, especially when your player gets traded because of it #HeartbrokenArroyoFan 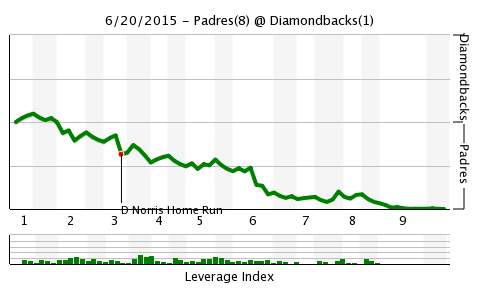 So that's no nine consecutive failed attempts to get back to .500. Odds against? One in 512. Damn. At what point do we start invoking curses? Father's Day tomorrow, and we'll see if the team can rebound to take the series and set up another stab in Colorado next week. Jeremy Hellickson starts for us.