Coming into this series, we were discussing how the Giants offense was better than ours, despite not having put up as many runs. And statistically, they were, with a higher OPS even before any park adjustments. How brilliant do we look now? The D-backs were facing one of the top National League pitchers in Madison Bumgarner, Ryan Vogelsong, and Chris Heston, coming off a no-hitter. The D-backs had Chase Anderson and the return in the Wade Miley trade going. Also, the Giants hadn't lost six straight at home since 2008, and not lost 8 straight at home since they were in Candlestick Park.

But after Anderson led the way in a shutout and Webster tossed five hitless innings, Rubby De La Rosa continued the theme. He didn't seem to have his best stuff early on, but the defense behind him was good, and the hitters were aggressive. He got through 8 at only 91 pitches, but was chased by back-to-back somewhat lucky hits in the 9th. Daniel Hudson came on in what was now a save situation. He struck out Crawford, but walked McGehee on four pitches, bringing up Buster Posey as a pinch hitter. Posey obliged by grounding into the fifth double play of the game to end it.

The Diamondbacks had taken the lead in the second, thanks to Jake Lamb's double and a really poor defensive play from Brandon Crawford. First, Lamb broke for third on a ball hit to the shortstop, which was almost certainly the wrong decision, but Crawford was looking at third instead of fielding the ball, and misplayed it. He then compounded his error by committing another one on the same play, throwing the ball away and allowing Castillo to reach safely and Lamb to score. They added two in the fifth. Inciarte singled, Goldy walked, and both scored on a double over center fielder Justin Maxwell's head by none other than Chris Owings. Maxwell was responsible for the fourth Diamondbacks run as well, misplaying a fly ball by Inciarte which went off his glove and allowed Ender to reach second. He stole third without a throw and scored on A.J. Pollock's sacrifice fly.

What would a Diamondbacks game be without a performance from Paul Goldschmidt? There were no huge hits, but two singles and two walks, and his ninth inning single meant that for the first time at the end of a game, his career batting average is .300 (technically, it's slightly below, but rounding up puts it at .300, and that's how it will show up in B-ref. The highest it ever got in 2011 was .298.) We can hope that he will now treat his career average the way he has treated his season average the past few years, and go on a hot streak every time his average falls below that mark.

So, on the series, the D-backs outscored the Giants 9-2. They outhit the Giants 26-14. They played better defense, committing no errors while the Giants committed 3 (and clearly better even on plays not scored as errors.) Just the result we all expected, right? Granted, there were still signs of things that needed to be improved. The Diamondbacks left far too many runners on base, something that probably would have come back to hurt them against a team performing better offensively. Now it's on to four against the Angels, two in Anaheim and two in Phoenix. Can the D-backs keep it up? 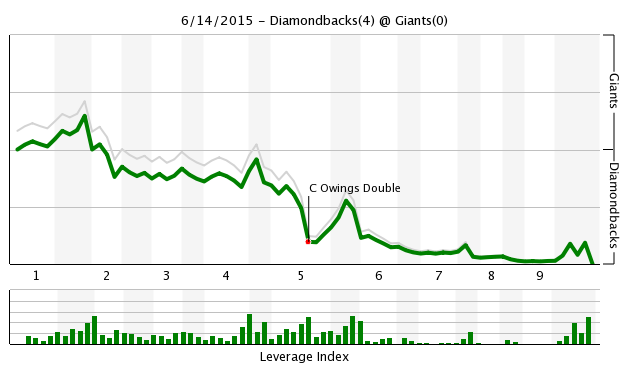 every time owings walks a angel gets it wings

And it's back to Los Angeles - hang on, weren't we just there? Oh, yeah: but this time, it's for the other team, the Angels. Robbie Ray will try and find some more pixie-dust to sprinkle on his starts.