Allen Webster's debut for the Diamondbacks was pretty solid, I think we can say. As in, "taking a no-hitter into the sixth inning" solid.

Share All sharing options for: Diamondbacks 4, Giants 2: Can't spell Webster without a W

In future years, Allen Webster may become the answer to a Diamondbacks' trivia question. Which pitcher got to hit for the team, before he threw a pitch for them? For such was the case this afternoon, as A.J. Pollock led off the first and second innings for Arizona, because Ryan Vogelsong appeared to change his name to Ryan ControlGone [look, it's been a long week, people - work with me here]. That seemed quite unlikely, as the first two batters up made outs in six pitches: but it then took Vogelsong seven attempts and 32 additional pitches to get that tricky third out. That included four walks, three of them in a row and two - to Jarrod Saltalamacchia and Nick Ahmed - with the bases loaded.

The only meaningful hit during the inning, in terms of production, was David Peralta singling home Paul Goldschmidt, who had the frame's other hit for the D-backs. But with Vogelsong catching Pac-man Fever [walka-walka-walka-walka...], it was enough for Arizona to send Webster to the mound with a three-run lead, by the time he threw his first pitch in Sedona Red [technically, Saturday whites, dammit]. As freeland1787 put it in the Gameday Thread, "Doesn’t get any softer a landing for him," and I can't recall another game where a Diamondbacks starting pitcher made his debut and had a three-run lead the first time he stepped on the rubber.

All stress gone, Webster responded with a clean 1-2-3 inning, right? In your dreams. For whatever infected Vogelsong, appeared to have lingered around the mound, in some kind of infectious cloud, and Webster walked two of the first four San Francisco batters he faced. That had always been the knock on Webster: like Rubby De La Rosa, the stuff was there, but the control could be questionable. In 23 minor-league innings this year, he had walked 12 batters, and this looked like more of the same. However, it was not the case, as a lightbulb appeared to go off inside the starter's head, and Allen retired the next fourteen Giants in order.

You'll perhaps have noticed something: the lack of mention of any San Francisco hits. And that was, indeed, the case: between today and yesterday, it seemed like a flashback to a bygone era, when the meme about the Giants (whether true or not) was that they were all pitching and no hitting. For over the first 15 innings of this series, Arizona pitching held the home team to just two hits. According to a stat on the national broadcast, it was the first time the Giants had been held hitless over the first five innings of consecutive games in almost thirty years, going all the way back to September 24-25, 1986.

However, just as we were beginning to start counting down the outs, it came to an end. With one out in the sixth inning, Webster gave up a four-pitch walk to the San Francisco lead-off hitter. The next man doubled; a sacrifice fly and an RBI double followed, and Chip Hale decided it was time to go to the bullpen. Webster went from a no-hitter to being lifted in one out, but you can't complain too much about a final line of 5.2 innings of two-hit ball, even if they did result in two runs. Three walks and two strikeouts isn't the kind of K:BB ratio which will lead to sustainable success either, yet it would be churlish to complain about what Webster did to the reigning World Series champions.

It was thus a two-run lead handed to the bullpen, and Andrew Chafin stopped the immediate bleeding, getting the third out of the sixth. He worked a clean seventh, before Randall Delgado took over for the eighth, and put up a zero of his own, despite a hit and a wild pitch. This was needed, because the Arizona offense appeared to have trudged off the field along with Vogelsong. He was immediately replaced by former D-back Yusmeiro Petit, and he plus his colleague in the Giants' bullpen all but no-hit Arizona the rest of the way. Our sole base-runner over the remaining 5.1 innings was a Yasmany Tomas single with two outs in the seventh; he was caught stealing, so we effectively went 16 up, 16 down.

Brad Ziegler entered for the second consecutive day, to try and close the door. A one-out double brought the tying run to the plate, but a hard-hit smash corralled by Aaron Hill at second, and a gentler one to Jake Lamb at third, brought Ziegler his eighth save and reduced his season ERA to 1.61. Pollock, Goldschmidt and David Peralta all enjoyed two-hit afternoons in front of a national TV audience, with Tomas getting a hit and a walk, and Nick Ahmed drawing a pair of walks. Jake Lamb went 0-for-4 with a strikeout and still doesn't seem to have got his timing right: since coming back, he is 2-for-17 with one walk and four K's. These things take time. 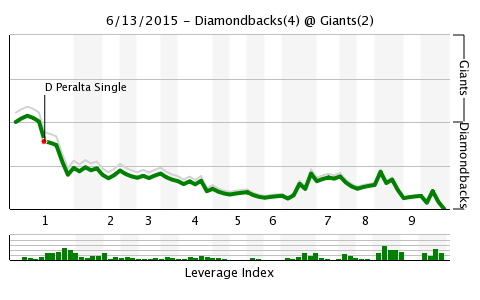 Though there is certainly a good case to be made, that the most valuable player for the D-backs today was Ryan Vogelsong. Over 650 comments here, with freeland1787, James Attwood and GuruB topping the list. Also enjoying the national attention were: AzDbackfanInDc, AzRattler, BIGredmc, Clefo, Craig from Az, DbacksSkins, DeadmanG, Diamondhacks, Jim McLennan, JoeCB1991, MrMrrbi, Nate Rowan, SenSurround, Sprankton, Xerostomia, asteroid, bbtng, friendly visiting fan gallo del cielo, gamepass, hotclaws, noblevillain, onedotfive, piratedan7 and xmet. Comment of the thread to 'hacks.

with an off Broadway hit

So, we head into Sunday's game, the series in the bag, and with the possibility of a sweep. Not many thought that would happen. Indeed, based on the preview poll, most of us expected to lose the series, and that certainly isn't going to happen. It's Rubby De La Rosa versus Chris Heston, so based on a) what our starters have done this series, and b) Heston's previous outing, this one should be like the Harvey Haddix game. So, it'll probably end up 11-9 to someone. Well, as long as it's us...