Chase Anderson took a no-hitter into the seventh inning, and settled for seven shutout frames. But would that be enough to get him his second win in 12 attempts?

The Diamondbacks threatened in the first, showing again their fondness for preferring to hit with two outs. Paul Goldschmidt singled, as did Yasmany Tomas, and Aaron Hill walked, but Chris Owings couldn't get the big hit. We did get on the board in the second, thanks to sound fundamental baseball, with Chase Anderson laying down a one-out bunt that moved Welington Castillo into scoring position, and he was able to come around and score after Ender Inciarte put the ball back up the middle for an RBI single. However, that was only the start of a sting of futility for the D-backs, who got the offense - just not the productive kind.

In the third, for example, Goldschmidt and Hill singled again, and with two outs, Owings this time did get a hit. Goldschmidt attempted to score from second on the play, but was thrown out by quite some distance. It's kinda sad that we have to take risks and basically hope the defense screws things up, because we have zero hope in our #8 hitter getting a runner home from third and two outs. Fourth inning? Runner left on third, this time by A.J. Pollock. Fifth? Tomas double-play. Sixth? Anderson bunts into an inning-ending double-play. It wasn't until the seventh inning that Madison Bumgarner has a clean frame, but he'd kept it a one-run game.

Meanwhile, nothing was going on with Chase Anderson. Nothing, as in zero hits. But it wasn't exactly the most dominating of performances here either, with Chase more effectively wild, than wildly effective. In the third, for example, he hit a Giant, walked the pitcher, and relied on a leaping grab from Hill at the hot corner to stop any further issues. Same in the fifth: a hit batter and a wild pitch gave San Francisco another chance, but they were equally unable to capitalize as the D-backs were on their end. However, Chase's change-up was proving effective, until Buster Posey lined a pitch back up the mound and on one hop off his right calf, with one out in the seventh.

Anderson recovered, and got through the seventh with no further issues. He was the first Arizona starter to throw at least seven innings while allowing one hit since Ian Kenned on September 19, 2011.  Chase walked one, and hit a couple of batters, striking out just a pair, so all told, was a little lucky in terms of BABIP to have gone as deep as he did without allowing a run. Still, there wasn't much solid contact: there was the liner snared by Hill, and a fly-ball to triples alley in right-center that looked a bit problematic, but from what I saw, it was otherwise largely a selection of gentle fly-balls and trundling ground-balls.

Of course, the big question was: would Chase Anderson's staggering lack of run support and/or bullpen assistance lead to another no-decision, after nine such in his first 11 starts? Or would our relievers be up to the task? Hey, and I wouldn't mind some insurance runs, while I was at it, too? The top of the eighth failed to deliver on the latter, and the bottom half started off shakily, Daniel Hudson allowing a single and wild pitch, to put the tying run on second with no outs. However, Huddy recovered, striking out the next batter, and a Giants TOOTBLAN on a ground-ball to second erased the lead runner, and helped us move to the ninth.

The D-backs threatened to score, with a lead-off double by Castillo, his third hit of the night. One out later, Jake Lamb came off the bench to draw a pinch-walk, and another man down, Pollock legged out an infield hit to bring up Paul Goldschmidt with the bases loaded - and, obviously, nowhere to put him. After getting ahead, he grounded out back to the mound, and another chance was spurned. That turned things over to Brad Ziegler, and really, that was probably the least interesting inning of the entire evening, as Ziegler duly Ziegled, getting three entirely harmless ground-balls to secure our first 1-0 win of the season.

11 hits and only one run? That's rare. Indeed, the D-backs have only done that once in team history: August 10, 2013 against the Mets. 11 hits, one run and a victory? Never by us. Indeed, it's pretty infrequent generally, with the D-backs becoming the seventh NL team since 1992 to pull off that trifecta. Weirdly, it happened three times just last season: two of those were by Atlanta, and in two of those cases, the defeat was inflicted on the Marlins. It was our second two-hitter of the season, following up the one on April 11th, when Archie Bradley (remember him?) beat the Dodgers' ace, Clayton Kershaw.

Two hits and a walk for both Goldschmidt and Hill, while Castillo had his first three-hit game as a Diamondbacks, and his OPS here is now almost 400 points better than Mark Trumbo's in Seattle (.652 vs. .258). We won the trade, folks! But the big news after the game was that Josh Collmenter has been taken out of the rotation and will pitch in the bullpen going forward. Allen Webster has been called up from Reno to start tomorrow's contest in San Francisco, though as yet there is no word on who will be sent down to make room for him on the roster. If I'd to guess, J.C. Ramirez would seem the most likely name. 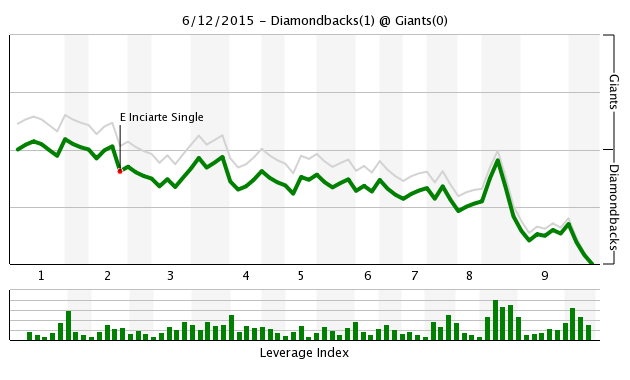 Hill is going to come to your house to taunt you

Outside your bedroom window.

Then you’ll be sorry.

Tomorrow, it's Josh Collmenter Allen Webster versus Ryan Vogelson, with an earlier start, scheduled for not long after 4pm, because this one is on National TV, folks! If the result is the same, for a bigger audience, I wouldn't mind.