Diamondbacks 7, Brewers 2: Summer is Coming - A Game of Beers

The Time of Beers is at Hand

Share All sharing options for: Diamondbacks 7, Brewers 2: Summer is Coming - A Game of Beers 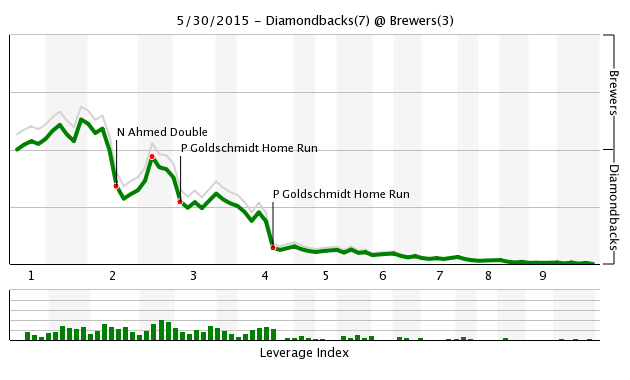 Decent enough GDT, given most people will have something else to do on a Saturday afternoon. freeland1787 had more than any two others combined, ahead of GuruB, with AzDbackfanInDc and JoeCB1991 tied for third. Also present were: BrokeNBattleX, James Attwood, Jim McLennan, MrMrrbi, PhxSunsFan4Life, Xerostomia, asteroid, cheese1213, coldblueAZ, ford.williams.10, gamepass, hotclaws, mbarnard11, onedotfive and xmet. Comment of the Thread, by a distance exceeded only by a Goldschmidt fly-ball, was mbarnard11 for a predictive gem:

I get the feeling Goldy isn't done with HRs today

We have a winner. Tomorrow, the Diamondbacks go for the sweep: if they do, we will have alternated sweeps and being swept in each of their last six road series. The team swept Colorado, Miami and, with a win on Sunday, Milwaukee, while being swept by Los Angeles, Philadelphia and St Louis. Chase Anderson gets the start, and be up early, since first pitch for this is at 10:10am, Arizona time.