Four home-runs by the offense, and four solid innings by the bullpen, saw the Diamondbacks take the series opener in Milwaukee tonight, despite blowing three leads along the way.

The riddle, wrapped in a mystery, inside an enigma, that is Rubby De La Rosa continue to perplex this evening. It was clear from the very first batter that it was going to be one of "those" night, where he struggles more than amazes, because Rubby followed in Josh Collmenter's footsteps, in allowing a home-run to the very first hitter of the game. I think it's the third time our pitchers have allowed homers to start consecutive games: Daniel Hudson and Wade Miley did it in SF and Colorado in 2011 (Sep 4-5), while Randy Johnson and Miguel Batista surrendered lead-off homers to the Phillies' Jimmy Rollins, back in 2002 (May 16-17). Let's not make a habit of it, shall we?

At least tonight, it only tied the game, with the Diamondbacks having taken the lead in the top of the first. Paul Goldschmidt doubled with two outs and David Peralta followed with a two-bagger of his own. Both pitchers managed hitless second innings, but the hitters took control in the third. First, the Diamondbacks got solo bombs from both Ender Inciarte and David Peralta, but the Brewers answered right back with a two-run homer to tie things back up at three apiece, though Nick Ahmed should perhaps have nailed Lyin' Ryan when he stole second. The fourh was also scoreless, though we did load the bases on two HBP and a Chris Owings single.

The starting pitching in this game was like the original Star Trek movies: only the even innings were any good. And so the fifth inning saw Arizona take their third lead of the game... and then surrender it, just as quickly. Goldschmidt's led off with a double, and advanced to third on a wild pitch, from where Yasmany Tomas was able to bring him in with a ground-out, and we were 5-4 ahead. We had hardly finished decorating the room and order a party platter, before the Brewers clawed their way back once more, with a pair of two out hits. That was the end of De La Rosa's night: six hits and two walks in five innings, with four K's, but the pair of home-runs were the killer tonight.

Daniel Hudson looked good in the sixth, but back-to-back singles in the seventh put men on the corners for Milwaukee, with just one down. Oliver Perez was brought in, the Brewers countered with a right-handed pinch-hitter, whom Perez promptly walked [17 of 31 righties who have reached safely off him this year]. Bases loaded? One out? Tied game? Obviously, there's only one pitcher you want in this situation. Unfortunately, Brad Ziegler is now the closer, so you're going to get Addison Reed instead, and like it. No, really: you'll like it. For he escaped with a pop-up and K, though this futility perhaps also helps explains why Milwaukee are currently on pace for 109 losses.

Further bizarreness was to happen in the eighth, as Nick Ahmed continued his unprecedented power-surge, blasting his third home-run in seven games, an estimated 392 feet. His OPS now begins with a six, which hasn't been the case since the second game of the season. We then got to see Addison Reed with a bat in his hand, for the very first time in his professional career. [With two outs and the bases empty, I can kinda see the point] He actually put the ball in play, which was unexpected. grounding out to second, and then posted a crucial zero for the bottom of the eighth.

Insurance tallies, which turned out to be highly necessary, were added in the ninth, courtesy of A.J. Pollock, a two-run shot after Inciarte singled. Our first four batters all reached, as Goldie picked up his third double of the night, and Peralta walked, but we weren't able to get any more than those two runs. Things got a little ugly in the bottom of the ninth, with a lead-off double against Brad Ziegler coming around to score, but Brad held his ground and the losing streak was ended. As noted, Goldschmidt had three doubles, while Peralta homered, doubled and walked twice, Inciarte homered and singled, Chris Owings had a pair of hits, and six of our eleven hits were for extra bases.

Oh, and in his Diamondbacks debut Jarrod Saltalamacchia was 0-4 with three strikeouts. That perhaps more appropriately sums what certainly wasn't the prettiest of wins - after giving up three leads, there was a perpetual sense of dread the rest of the way that the bullpen was going to make it four. However, credit to Reed in particular: for once, the W by a reliever's name probably seems justified. Let's take a look at the Fangraph and see what it says. 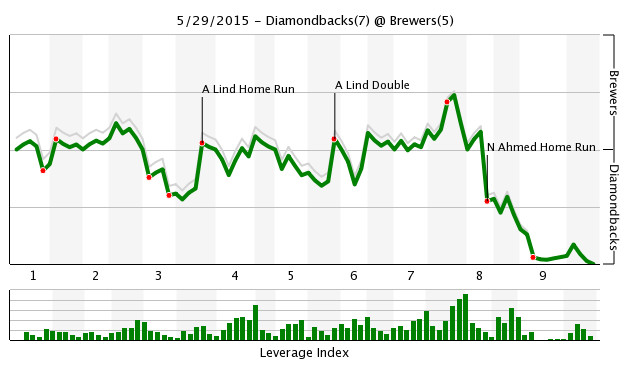 Oh, yeah: I forgot Trumbo's cameo. Owings singled to lead off the sixth, swiped second and was able to advance to third on a throwing error by the catcher, so was there as the goahead run with no outs. Ahmed flew out to right, not far enough to get him home, and Trumbo then pinch-hit for De La Rosa. However, he lined out softly to second, and Owings had strayed far enough off third that an alert throw across just got him - Chris looked safe immediately, but was called out, and the replays didn't show the necessary clear and conclusive evidence to overturn it. If that had proved decisive, I'd probably be in a higher state of miffedness about this.

We'll always have all those good memories of it We go for the series and a winning streak tomorrow afternoon - note, the game starts just after 1pm Arizona time, and will be on FOX SPORTS 1, since inexplicably, this vital match-up was deemed worthy of national television by the powers that be. Jeremy Hellickson goes up against Kyle Lohse. I get the feeling they may be trolling us, and most of the country may be seeing alternative programming...