Nope, I got nothing. The Diamondbacks were blanked for the second time this series, and were swept out of LA, losing in 13 innings this afternoon to the Dodgers.

Chase Anderson deserved better. Much better. You couldn't have asked for anything more from him this afternoon, as he held down a potent Dodgers offense (it came in leading the National League in runs per game) for six scoreless innings, giving up just a pair of hits, both singles, walking one and striking out seven. It was yet another quality start by a Diamondbacks pitcher - the 13th of the season - but the team, once again, was unable to take advantage. Since April 18, we have had eight quality starts, but the team are 3-5 in those games, having scored a grand total of four runs in those five defeats.

This defeat is largely on the offense, who made Brett Anderson look an awful lot better than the 5.49 ERA he had, entering today's contest. He matched zeroes with Chase for six innings, largely by avoiding mistakes (no bases on balls or extra-base hits) and our own propensity for helping him escape whenever trouble beckoned. He faced only two batters over the minimum, thanks to a pair of double plays, off the bats of Tomas and Pollock, plus Tuffy Gosewisch being caught stealing, after what I can only presume was a botched hit-and-run of some kind. Because if Tuffy has the green light to steal, I'm forming a mob with torches to storm Chip Hale's house.

Things did not improve for either set of hitters when the respective hitters came into the game, beginning with the seventh inning. Through the end of regulation playing time, neither side had had a runner reach third, and hardly anyone had got past first base - Arizona and Los Angeles had combined for a whopping TWO at-bats with runners in scoring position. The nearest either side came was probably a Howie Kendrick double to right-center with one out in the ninth, which Mark Trumbo misplayed, causing Kendrick to try for third. However, a perfect relay throw got the runner at third base, and we sailed into extras.

The tenth inning saw a positive flood of RISP opportunities, as both sides got a lead-off double, only for the man concerned to be left there, three outs later. First, the Diamondbacks saw Paul Goldschmidt get his sixth double off the year, off former Arizona first-round pick Sergio Santos [who back in those days, was a shortstop rather than a relief pitcher] . Trumbo then bunted Goldschm... Oh, who am I trying to kid. Trumbo struck out, as did Yasmany Tomas after him. An intentional walk to Chris Owings led to Tuffy Gosewisch being pinch-hit for by Danny Dorn, which caused the Dodgers to go to a lefty, so we replaced Dorn with Jordan Pacheco... who grounded out.

It looked like this wastefulness would immediately come back to haunt Arizona, as Andrew Chafin gave up a lead-off double. He was pulled for Enrique Burgos, who walked one, but struck out two of the three batters faced in ending that threat, and was even more dominant in the next frame, carving up both Kendrick and Adrian Gonzalez, getting a swinging K of each man, on three straight pitches. It seems not inconceivable that this showing, which saw Burgos touch 98 mph, has improved his chances of staying with the team when we need to clear a roster spot for Robbie Ray on Tuesday. Who might go down instead?

Before we get to that, there's the little matter of the top half of the thirteenth innings, where Arizona became the first team to have a runner reach third-base all day, after back-to-back singles with two ours by Jordan Pacheco and Aaron Hill. However, Pacheco made an ill-advised decision to try and score from third on a wild pitch, and was tagged by the Dodger pitcher with a "no-look" swipe behind his back, that would have been quite cool, if only we were not the team on the receiving end. Between that and Pacheco being hit by a batted ball for the last out yesterday, he'll probably be quite glad to be out of Los Angeles.

Enter Evan Marshall. Before the game, Chip Hale said the team intended to use him in lower-leverage situations, until he can regain his form: "We're going to probably bring him back, pitch him a little earlier in the game and try to make sure that he can be consistent" Circumstances dictated otherwise today. While he was solid enough in the 12th, Marshall then gave up his third home-run in 10.2 innings of work to Yasmani Grandal, leadiing off the bottom of the 13th, and giving the Dodgers the victory. He became the second D-backs reliever since 2006 to take the loss on consecutive days; Addison Reed did it last year, on September 17 + 18.

Of course, Burgos is still extremely young and raw; we saw that in his second outing. But the way he made one of the toughest hitters this season, in Gonzalez, look an absolute fool, was eye-opening, and you can't argue with six strikeouts in his first four innings. Perhaps, rather than using Marshall in mop-up duty, he can figure it out in Reno? Though it's not exactly where I would want to send a struggling pitcher to work on achieving consistency with his mechanics... Obviously, options aren't an issue for either: I imagine it may well still be Burgos, but the past couple of days have made the decision closer than it was.

However, it's hard to complain too much about pitching that keeps the opponent off the board entirely for a dozen consecutive innings, had a K:BB ratio of 15:2 and held the opposition to 0-for-4 with runners in scoring position. The loss, and the sweep overall, is much more on the offense, who scored a total of four runs over 31 innings of plate time. Today, Goldschmidt was the only star, going three for five. Nobody else reached base safely more than once, and we ourselves had a K:BB ratio of 13:1. As the Fangraph below shows, there's an awful lot of negative equity to go around... 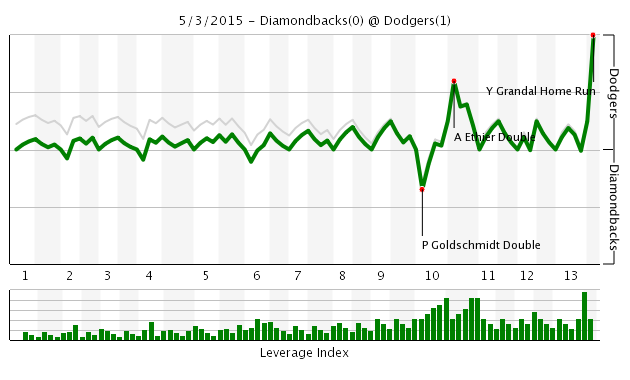 Nineteen hardy souls stuck it out in the GDT, with JoeCB1991, AzDbackfanInDc, James Attwood and myself all in the forties by the time this came to its sorry conclusion. Also present were: Clefo, DbacksSkins, Diamondhacks, GuruB, JoelPre, Makakilo, MrMrrbi, Zavada's Moustache, cheese1213, coldblueAZ, hotclaws, onedotfive, preston.salisbury, soco and xmet. 'Hacks gets comment of the night, in reply to James's suggestion of some nice amaretto:

…but isnt it pronounced Achh-maretto???

It's off to Colorado, to visit the Rockies, and we'll be hoping for better there against a slumping opponent. They probably feel the same way...