Diamondbacks 4, Dodgers 6: Down for the count

There was a lot of counter-punching going on in the early innings of this one. As for the later innings, I was left punching the couch, the wall and the television set....

Share All sharing options for: Diamondbacks 4, Dodgers 6: Down for the count

Just as Rubby De La Rosa channeled his inner Rubby De La Rosa last night, so Jeremy Hellickson played the role of Jeremy Hellickson to perfection tonight. This was the kind of excruciating mediocrity we have come to expect, even though it has only been five major-league starts for Hellickson since he came to Arizona. Early struggles, a lot of pitching from the stretch and a glacial pace which made the entire experience like having your Brazilian wax session carried out by Dr. Josef Mengele. The first four innings took basically an hour and three-quarters, and at that point, we had a shot at only the third four-hour regulation game in team history.

It did start better than last night, as we surpassed the entire offensive production there before we had made two outs. Ender Inciarte doubled to lead things off, and Paul Goldschmidt then did about the most typically Goldschmidty thing possible: cranking the first pitch he saw to center, for his 6th home-run of the season. Yasmany Tomas followed with a two-out double, which I mention, largely because it went to the left-field wall, which feels like something of a first for him. Anyway, Hellickson wasted no time in handing the lead back. After a lead-off strikeout, Los Angeles went homer, single, RBI double, and we were tied at two.

Arizona struck back immediately: Jordan Pacheco walked, and Cliff Pennington then singled him to third, though Pennington was thrown out at second on an extremely ill-advised attempt to make it a double. Inciarte singled back up the box, and we had the lead again. Hellickson waited a little longer before giving up that one: after successfully stranding a lead-off double in the second, a lead-off walk in the third proved more problematic, coming in to score on a two-out single. But, again, the Diamondbacks responded quickly. Very quickly, in fact, Aaron Hill delivering his first home-run since August 2014, leading off the fourth, and we were 4-3 up.

Probably the most memorable thing for Hellickson was getting his first National League hit in the fifth inning: a squibber that couldn't have been better placed towards third if he had tried. It seemed to settle him down, as after allowing another lead-off man to reach based in the bottom of the fifth, he retired the final seven batters he faced. Hellickson left with a final line of 5.1 innings pitches, and three runs allowed on six hits and a walk, with six strikeouts. He reduced his ERA for the season from 5.24 to... 5.20. But this was part of a spell where pitching suddenly dominated, the sides combining for 20 consecutive batters being retired.

Andrew Chafin was part of that streak, tidying up the last two outs of the sixth inning after Hellickson was pulled, and Evan Marshall started well enough, also setting down the first two batters he faced in the seventh. Unfortunately, he wouldn't get the third one. A home-run blew the Diamondbacks' third lead of the night and tied the game, then a double to left field put the go-ahead run in scoring position, and a ground-ball past the dive of a despairing Hill gave Los Angeles their first lead. It may be 50/50 whether Marshall or Burgos gets sent down to the minors on Tuesday, when we need to clear a spot for Robbie Ray.

More two-out trouble followed for the bullpen in the eighth, off Brad Ziegler, who had been so impressive in the first month of the season. He had two outs and the bases empty - albeit with the help of a caught stealing - but like Marshall, was unable to get the pesky third out. He gave up three straight singles, and the Dodgers tacked on an insurance run. Meanwhile, the Diamondbacks offense had closed up shop. After Hellickson's single in the fourth, our next hit was a Pacheco single with one out in the ninth, and the only base-runner in between those was a two-out walk to Mark Trumbo in the eighth.

The way this game ended was certainly something I'd never seen before. Pacheco was on first with two outs, and David Peralta came off the bench to pinch-hit for Ziegler. Peralta knocked the ball back up the middle, but the pitcher (I think) got a glove on it, and deflected the ball unerringly at Pacheco, where it bounced off him, past the second baseman and into the outfield. Being hit by a batted ball is an automatic out, though I think Peralta got credit for an infield single, so who knows what might have happened. It was the second game today that ended in such a fashion, as the Angels lost to the Giants, in similar manner earlier on. You never hear of something, and then... 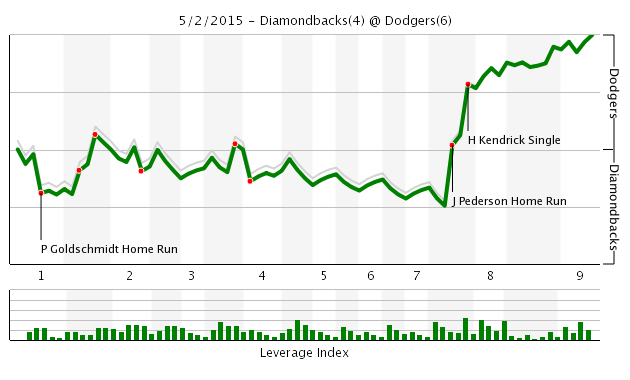 The Gameday Thread was a little bedeviled by technical difficulties, as seems that the fight crashed SB Nation's severs for a bit. Mind you, that was about the time Evan Marshall was melting down, so it probably just saved us from further punishment. SongBird was top commenter, ahead of myself and James Attwood, with others present being: $-The Moneyman-$, AzDbackfanInDc, AzRattler, BIGredmc, Dbackguy, DeadmanG, Diamondhacks, GuruB, JoeCB1991, JoelPre, Makakilo, MrMrrbi, Nate Rowan, TheGoldenSombrero, cheese1213, coldblueAZ, ford.williams.10, hotclaws, preston.salisbury, soco and xmet. Comment of the night to soco:

Just because you made it warm doesn't make it yours.

Let's just say, you had to be there.... And tomorrow, we will be here, trying to stave off a sweep at the hands of the Dodgers.