There was a great deal of poor play, in one form or another, by the Diamondbacks tonight. It's a game we likely didn't deserve to win. But losing it thanks to five runs conceded over the final four outs still stings a bit.

Yeah, plenty of blame to go around here. Let's start with Chip Hale proclaiming last night that the team "didn't need" any fresh arms, after the bullpen had to throw eight innings in the win over the Cubs. Tonight's bullpen line, of five runs allowed over three innings of work, would suggest otherwise. But at the risk of stating the obvious, this wasn't a well-pitched game all round: you won't win many games when conceding nine runs. Rubby De La Rosa had another one of "those" outings: by which I mean, his effectiveness swung wildly, from woeful to wonderful. Not just over innings, but within them, and even within a single at-bat.

De La Rosa has now allowed 15 earned runs in 34 innings of work this month. However, 60% of those have come in just two innings: five in the second against the Dodgers on May 1, and four in the fifth inning tonight .It's become De La Rosa's signature: he'll be cruising along, looking good, and then the wheels will fall off. Sometimes, the damage will be limited to a run or two: but on other cases, things snowball out of control. So it was this evening. after a walk to the first batter faced, De La Rosa looked really good the first time through the order, the Cubs going 0-for-8 with four strikeouts.

He even escaped a potentially sticky situation in the fourth. The lead-off man got the visitors' first hit, then stole second with one out. The next batter hit a sharp ground-ball in front of the runner to Nick Ahmed, but instead of getting the out at first, tried to throw behind the man on second. Initially called out, the decision was reversed after a somewhat questionable review (it certainly didn't appear "clear and convincing evidence" required from the angles I saw), putting two on with one out. However, Miguel Montero helped out his old team, by immediately hitting into an inning ending double-play.

There was no escape in the fifth, however. Two singles and a walk loaded the bases with one out, and De La Rosa fell behind the next hitter. But he came back with a series of devastating change-ups to strike out the batter, and was within a strike of getting out of the inning. Then, Rubby's control deserted him: he plunked Kris Bryant and Anthony Rizzo then lofted a ball down towards the D-backs bullpen, which was misplayed by David Peralta, with a margin of error not seen since Mark Trumbo's debut as a Diamondbacks down under in Sydney last year. I'm not kidding: here's a screenshot showing Peralta's leap and the location of the ball (sorry it's a bit potato quality!).

Yeah. Missed it by that much. Where "that" is a small zip-code, giving the Cubs a 4-2 lead. Maybe he couldn't have caught it, but this wasn't even a "good effort" try. Meanwhile, our offense started brightly with a two-run single by Yasmany Tomas in the first, scoring Mark Trumbo, who had doubled, and Paul Goldschmidt, who had walked, both men having advanced on a groundout. But Arizona then proceeded to run themselves out of potential further scoring opportunities. A.J. Pollock singled to lead off the third... and was caught stealing. Aaron Hill singled with one out in the fourth... and was caught stealing. We had apparently not realized, Jon Lester was no longer on the mound.

Peralta did redeem himself for the above blunder in the bottom of the fifth. Nick Ahmed singled, and after a failed bunt attempt by De La Rosa, Pollock reached as the Cubs botched a ground-ball. A hideous strikeout by Trumbo was followed by a Goldschmidt walk, loading the bases, and it was Peralta's turn to empty them, much like Rizzo just missing a grand-slam by a couple of feet. That made it 5-4 to the Diamondbacks, and before De La Rosa left the game, the lead had been extended, Tuffy Gosewisch joining Nick Ahmed last night, with his first home-run of the year: Cliff Pennington is the only position player on the 25-man roster without a long-ball now.

1.2 solid relief innings from J.C. Ramirez followed, and we were within four outs of a sixth successive win, with the bases empty and a two-run lead. However, a single seemed to lead Hale to panic, yanking Ramirez for Oliver Perez, who then completely failed at the whole LOOGY thing by hitting Montero. Perhaps due to the thin state of the bullpen, Perez was left in to face a right-handed batter, who promptly clobbered a two-run double, tying the score at six. So Hale was forced to go to use another right-handed pitcher anyway, Daniel Hudson getting the final out, albeit after a walk and a wild pitch. Hindsight is 20/20, but if only he'd done that earlier...

Arizona went down in order - in fact, Gosewisch's home-run was out last base-runner of the night, as the final 11 Diamondbacks hitters were retired. In the ninth, Enrique Burgos continued the bullpen failure, with a little help from Yasmany Tomas, whose error helped set the table for Rizzo's three-run homer into the pool area. He recovered to strike out the next two - he now has 25 K's in 13.2 innings of work - but the damage had been done. The last three relievers used to protect a two-run lead for us tonight, now have ERAs of 7.20, 4.66 and 4.61. Really hard to argue an extra arm down there tonight would have helped. 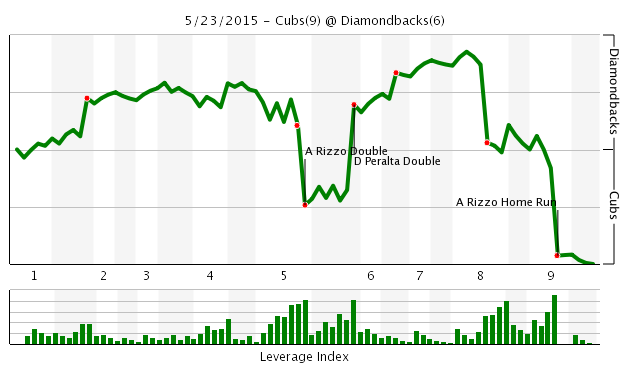 With the ticket promotions

They should just turn this into a telethon. Show Kendrick’s face on screen with Berthiaume saying, "This man needs another Honus Wagner card. Won’t you help?"

Rubber game of the set tomorrow, Jason Hammel going up against Jeremy Hellickson. Yeah, bet we're all brimming with optimism for that one. I'd like to thank ish95 for agreeing to step in and do a pinch-recap. You should too, since otherwise it would have been me, three games in a row. You don't want that, trust me!