All things considered, I couldn't be better, I must say. On Superhero Night at Chase Field, there was no shortage of caped crusaders, and one or two bits of kryptonite as well.

Share All sharing options for: Diamondbacks 5, Cubs 4: We're super, thanks for asking...

There were more narratives to be found here, than in the entire Marvel Universe. We had Josh Collmenter wobbling his way through a start where, once again, he clearly didn't have his best stuff, but somehow holding on. The return of fan favorite, Miguel Montero. Supervillain Addison Reed, booed off the mound the last time he appeared at Chase, getting more of the same treatment. Paul Goldschmidt smacking a two-run homer to extend the game, when the Diamondbacks were down to their final strike. And Nick Ahmed, getting his first home-run of the season, taking his average back above the Uecker Line, and delivering the walk-off win in the 13th inning.

We should start at the very beginning. Collmenter had a clean and quick top of the first inning, and with one out in the bottom, A.J. Pollock smacked a triple. Perhaps surprisingly, given his mad wheels, that was actually Pollock's first three-bagger of the season: he now only needs two more to tie Mark Trumbo. Paul Goldschmidt stroked the ball back up the middle, and it was 1-0 D-backs. Let's just repeat that simple formula nine times, and we can go to bed at a reasonable hour, and very happy. The baseball gods, however, were having none of that nonsense, and had something else in mind for their pleasure.

Enter Josh Collmenter's evil twin brother, Cosh Jollmenter. Y'know, the one with the batting-practice velocity fastball, who can't seem to put people away, goes to a full count on just about everyone and hits his spots only when they are calculated by zip code. For that's what we got for the next three innings. Having taken 11 pitches to get the first three outs, the next three took a full 30 pitches. By the end of the fourth, our starter was up to 84 pitches and in a 2-1 deficit, having allowed six hits and a walk in those three frames. A solo homer tied the game in the third, and the fourth brought a men on the corners, no out jam, Collmenter almost escaped before giving up a two out RBI single.

His fifth inning was back to the first, with a 1-2-3 inning, and it seemed we might try and squeeze another out of Collmenter, when he hit for himself in the bottom of the inning. However, turns out that was only a ruse, and Josh was done. Somehow, it was a 2-2 tie at that point, thanks to the unlikely form of Nick Ahmed, who hit his first home-run since July last year, leading off our half of the fifth, a 388-ft shot to left. It also elevated Ahmed's batting average for the season to the Uecker Line. But, wait! There's more....

The rest of regulation playing time was fairly quiet. We did get the lead-off man on base in both the sixth and seventh innings, but Goldie was stranded on second after stealing a base, and Tuffy Gosewisch was picked off first the next time we were up. Meanwhile, Collmenter and the bullpen combined to retire 15 straight Cubs at one point between the last of the fourth and two outs in the ninth. Daniel Hudson worked two scoreless innings and Enrique Burgos put up a zero in the eighth, the pair combining for five strikeouts. Perez and Ziegler combined for the ninth, and we started the weekend as we started the week: by going into extras.

Enter Addison Reed. With unfortunate timing, the Arizona Republic had published an article earlier that evening, with the headline, 'Addison Reed on the rebound'. All you need to know is that, following his performance in this game, the story was updated to a new headline, 'Addison Reed proves mechanical adjustments aren't sudden fixes.' He had some bad luck with BABIP, but the bottom line is, Reed faced five batters, retired one of them, and left the mound having handed the opposition a two-run lead. And, as last time he appeared at Chase, Reed had to be lifted mid-inning, leaving with the boos of the crowd ringing in his ears.

4-2 down in the bottom of the tenth, pinch-hitter David Peralta and Ender Inciarte both grounded out, reducing our Win Probability at that point to 1.5%. But down to our final strike, Pollock picked up his third hit of the night, bringing Paul Goldschmidt to the plate, as our last hope. Also with a two-strike count, this happened, with the comforting inevitability of the Cubs failing to win the World Series.


How many times has a Diamondback batter hit an extra-inning home-run, to tie up an eventual win, or win the game from behind? Not often. This was only the third time since 2004. It was most recently done, curiously, by Miguel Montero on June 7 last year against Atlanta, when we won 4-3 in 11 innings. The winning pitcher there? Same as tonight, Randall Delgado. The only other case in the last decade was Ryan Roberts' walk-off grand-slam against the Dodgers in September of 2011, which I'm sure needs no further description. Tonight's, simply adds another chapter to the legend that is Goldie, and perhaps saved Reed from lynching at the hands of a masked mob.

But the excitement was far from over. The 11th saw the Cubs put two on with one out, in part thanks to an error by Yasmany Tomas. But a fabulous double-play, in particular turned by Ahmed as the pivot guy denied Chicago. However, Nick was picked off to end our 11th, and in the 12th we flunked harder. The bases were loaded with one out, after singles by Inciarte and Pollock, plus an IBB to Goldschmidt - but Tomas and Jordan Pacheco both K'd. Meanwhile, we got good bullpen work from Andrew Chafin, with two scoreless innings, though we were running out of arms, in part because Chip Hale burned four to get six outs in the ninth and tenth. Delgado was the last man up.

Fortunately, it proved just enough - emphasis on just, as Randall wobbled through the 13th, loading the bases and taking 24 pitches to put up a zero. With one out, Gosewisch found a gap for a double, and Ahmed dropped one down the left-field line for the walk-off win. Pollock ended the night with four hits and a stolen-base; Goldschmidt three hits, three RBI and a pair of SB; while Ahmed had three hits, and has his OPS up to .541, which is at least on the same street as offensive respectability, if not quite its next-door neighbor. This would have been a tough one to lose; instead, it moved us above the Padres and to within one game of .500. Maybe tomorrow later today? 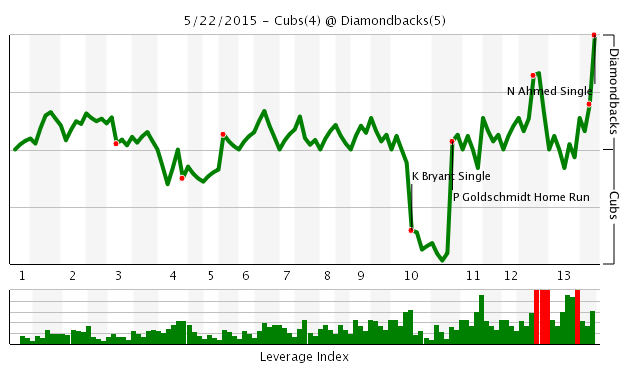 Would love to see the Dbacks get a walk off win here!

Right idea - only off on the timing by about an hour and three-quarters! We'll be back at Chase Field tomorrow night - key word, "night", since it's a rare 7:10pm Saturday first pitch - when Rubby De La Rosa (and whatever is left of our bullpen!) will take on Jake Arrieta, as we try to extend our winning streak to six straight and reach .500 again.