Share All sharing options for: Diamondbacks 0, Phillies 6: A Lethargic Loss

Sunday's match-up appeared to be in the Diamondbacks favor. We had our No. 1 starter out on the mound. The opposing starting pitcher, Sean O Sullivan, had not had a major league win as a starter since 2011. Skipper Chip Hale put the "A" Team in the lineup, with the top of the order including Trumbo, Goldy, Pollock, and Tomas back to back. And, Tomas homered on Saturday, perhaps indicating his bat is finally warmed up this season.

But, Sunday just wasn't our day. Collmenter looked not bad, not great, for about 5 innings, before he unraveled a bit in the 6th. In the 2nd inning, he did give up a base hit to Hernandez, and a subsequent sac RBI to Rupp. Then, Ruf had a solo shot in the fourth. But in the 6th, Maikel Franco had an RBI triple, and then Hernandez had an RBI double. That put the Phillies ahead 4-0. But, with a sleepy Diamondbacks offense, trailing 4 runs behind in the 6th was enough to shut down any optimism of a comeback. After that, Delgado came in for relief, and then gave up a homer to Franco in the 8th. Side note for those of you that aren't familiar with Maikel Franco, he is one of the few shining young stars in the Phillies organization. And, he's good. Man, do I hate to see the Diamondbacks lose, but if we're going to lose, the silver lining is being able to catch a peek at the up and coming talent in the league.

As mentioned, our offense was pretty weak. A few singles here and there, but nothing really came together. Tomas had a pair of singles. Hill hit his fifth double of the year, which was the only extra base hit for us. Trumbo drew a good walk after starting his first at bat 0-2. Pollock hit in the clean up spot, but did not have much to "clean up." Overall, it was a slow offensive day. O'Sullivan was effective with his pitches for the most part. His breaking ball was wild all day, but Rupp managed well behind the plate.

Sadly, I would say the highlight of this game for the Diamondbacks was when a rude Phillies fan stole a home run ball from a little old lady, and the Diamondbacks camera guy caught it on film. Bob Brenly sent her a t-shirt from the press box. The old lady put on the D-backs shirt over the Phillies shirt, and was born again as a Diamondbacks fan. So, take that Philly. You won this series, but we are wining the war for hearts and minds- one old lady at a time.

So, the Philadelphia series was a bit of a bust. Was it the cloudy, rainy, depressing weather? Too many Philly Cheesesteaks? It's hard to say. But, here's hoping that some Miami sunshine will reinvigorate us. Before the Washington series, we were playing near .500 ball. And, with Tomas looking more like the hitter he was supposed to be, Hill looking better at the plate, and of course, Goldy and Trumbo both performing well, things could improve.

Bells and whistles (by Jim) 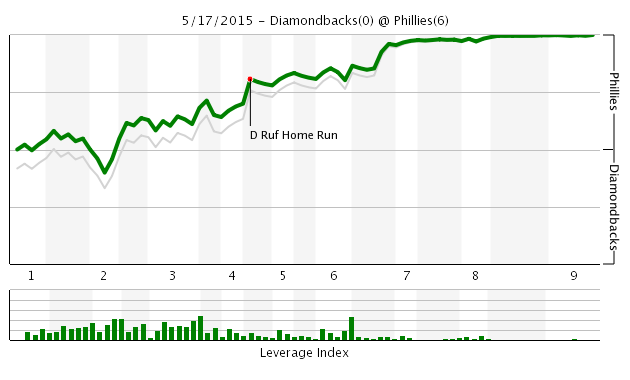 As Meg notes, it's now off to Miami, where they'll take on a team that is so bad... [How bad are they?], the Marlins fired their manager this afternoon. If we can't beat them... Rubby De La Rosa takes on a familiar face, former D-back Dan Haren, in the opening game of that four-game series, which kicks off at 4:10pm tomorrow, Arizona time.