Diamondbacks 5, Phillies 7: Swingin' in the Rain

Archie Bradley made his first start since coming back off the DL in Philadelphia. Sadly, that's about where the good news stopped for Arizona.

Share All sharing options for: Diamondbacks 5, Phillies 7: Swingin' in the Rain

Obviously, given what happened the last time Bradley took the mound, it was just great to see him out there. He didn't obviously appear affected by the incident, but it has to be said, this was a much less effective Archie than we saw in his previous starts. This was a Phillies team which came into the contest dead last in the league for most offensive categories, hitting a collective .232/.287/.335, for a .622 OPS. But you wouldn't have known it this even in Philadelphia, as most than half of the 15 batters Bradley faced reached base, on five hits and three walks. With only one K, that leaves Bradley's K:BB ratio at 15:14 in 22 innings, so more work is clearly needed.

He got through the first with minimal trouble - a one-out walk. The second did see Archie give up his first home-run in the major-leagues; though he couldn't have had it hit by a nicer fellow, as it was Jeff Francoeur who went deep on an 0-1 count. Two men reached base thereafter, including the opposing pitcher, who reached base on an error by Nick Ahmed, but Bradley escaped. There was no such luck in the third, as he faced five batters and retired none of them, on a pair of walks and three hits. The weather showed its disapproval, the rain forcing the umpires to clear the field, just as Bradley was being yanked by Chip Hale, with the bases loaded, two in and still no outs in the third.

During the ensuing delay the Diamondbacks and Phillies Twitter accounts played rock-scissors-paper with each other over social media, and we hoped the rain would set in for the night, wiping all trace of the game from the record books. Sadly, we were disappointed, as the hold-up lasted for just over an hour and a quarter, before play was resumed. Bradley had been replaced by J.C. Ramirez, who dis as well as could be expected, given the unholy mess which he inherited, getting Frenchie to hit into a double-play, albeit one which made the score 4-0, then getting a fly ball. That closed the book on Bradley: 2 IP, 5 H, 4 R, 4 ER, 3 BB, 1 K.

The rain seemed to have refreshed the Arizona lumber however, and the offense chipped away at the four-run deficit. Some two-out magic in the fourth got us on the board. Chris Owings singled, Tuffy Gosewisch reached on an error, and Nick Ahmed drove in a run with a single. Better was to follow in the fifth inning, when a lead-off single from Ender Inciarte, was followed one-out later by Paul Goldschmidt's 10th home-run of the year. He's the fastest D-back to reach double-digits in homers since 2010, when both Kelly Johnson and Mark Reynolds did it, in our 29th and 31st games respectively. Before them, you're looking at Troy Glaus in 2005 (Game #34).

But just when we thought we were pulling ourselves out...  The bullpen drags us back in.  The fifth inning saw Enrique Burgos strike out the side! Unfortunately, he did so around four hits, three of them doubles, off himself and Andrew Chafin, resulting (with a little help from Mark Trumbo) in the Phillies getting back all three of the runs scored by Arizona in the paragraph, making the score 7-3 to Philadelphia after five. But back came Arizona again: Tuffy Gosewisch singled home one run in the sixth, and with one out in the eighth, Yasmany Tomas got the first home-run of his Diamondbacks' career, an opposite-field shot that narrowed the margin back to two.

However, that was all she wrote: we never even got the tying run to the plate thereafter, and the bright spot was probably Addison Reed working a pair of scoreless innings, in his first outing since being relieved of everyday closer duties. He looked a little flaky to start with, giving up a double to the first batter faced, but then settled in. He even worked a 1-2-3 inning in the seventh, something which we don't usually connect with Reed. Hopefully, he can use these lower stress innings to figure out what ails him. Brad Ziegler put up a zero in the eighth, around a couple of singles, but our hitters went down without troubling the bases in the ninth. 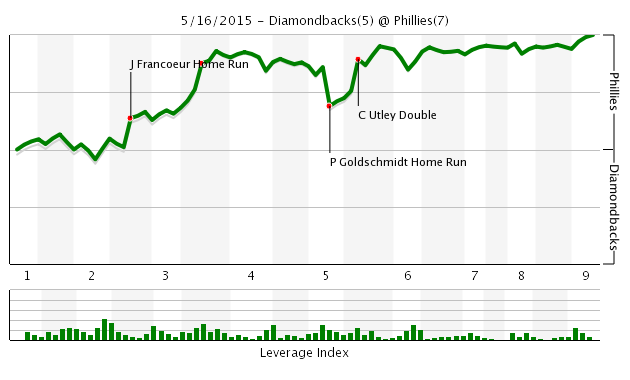 is a little occupied with Nick Ahmed right now

"Seager is sexy, and Flower is best"

The Diamondbacks will try to avoid a sweep at the hands of the Phillies tomorrow afternoon. Well, it'll be afternoon in Philadelphia, it's going to be about 10:35 am here in Arizona, so you'll probably want to bring your caffeinated beverage of choice. Our record outside of the division is now a dismal 2-7, so we'll be hoping we can do better. Josh Collmenter will certainly be hoping he can do better, with Sean O'Sullivan going for the home team.