I'd not blame Addison Reed if he had to suppress an inner smirk tonight, after the rest of the bullpen blew the game for the D-backs, hours after his demotion from closer. This "protecting a lead" thing, is clearly harder than it looks.

Share All sharing options for: Diamondbacks 3, Phillies 4: Meet the new dross, same as the old dross

For anyone who though firing Addison Reed would cure everything, tonight was a cold reality check. Over the past dozen games, the Diamondbacks are 5-7, six of those seven losses belonging to relievers, the exception being Josh Collmenter's two-inning meltdown in the opener against Washington. The rest have been spread around the bullpen: the since-demoted Evan Marshall had a pair, but the others belong to Enrique Burgos, Randall Delgado and Addison Reed, with Oliver Perez adding his name to the list for his role in a horrendous seventh inning tonight, which saw three relievers combine to give up three runs, once again turning a lead into a deficit in a single frame.

This left Chase Anderson again winless on the season, despite a solid outing which lowered his ERA for the season to 2.81, a figure that deserves a great deal better. [Mind you, he still has some way to go, before Anderson catches up with Jeff Samardzija last year, who was winless in his first 10 starts for the Cubs, despite an ERA of 1.46.] Tonight, Anderson was hardly overpowering, with only a trio of strikeouts in his 5.1 innings, and also was going too deep into counts - it took him 104 pitches to get that far. But he held the Phillies to three hits and three walks, and took a shutout into the sixth inning.

He should perhaps have been lifted a little earlier. There was already some debate in the Gameday Thread over him being left in to start the sixth, and when it began with him hitting the first batter faced, and then walking the second one, it seemed the time was right for Anderson to hit the showers. Chip Hale felt otherwise, and Anderson then lost the shutout on an RBI double to Ryan Howard, which ceased being A Thing somewhere round about the All-Star break in 2011. One out later, that was the end of Anderson's night, leaving with runners on second and third and one out. It took some nifty escapology from Andrew Chafin to escape the inning without further damage.

To that point, the Diamondbacks hadn't exactly been lighting up Chad Billingsley, in the manner to which he should have become accustomed after his last couple of starts. We didn't get a runner past first base, until two outs in the fifth innings, when Anderson and Ender Inciarte got back to back singles, but A.J. Pollock looked at strike three. A one-out double from David Peralta in the sixth inning was similarly stranded, and there were concerns that the run scored by the Phillies would be all that they'd need. Turned out not quite to be the case - no, fate had something a good deal crueler in mind.

The seventh inning started brightly enough, with the bottom of the order doing strangely unbottom of the order things i.e. not making outs. Tuffy Gosewisch walked, and Nick Ahmed, after failing to get a bunt down, blooped a single into right-field to put the tying run into scoring position with no outs. Mark Trumbo was sent up as a pinch-hitter to lay down a bunt, no, wait, move the runners over with a productive out, hang on, that's not right either: strike out swinging. Ah, yes: that was it. And when Inciarte flew out, it looked like the chance would go begging. Fortunately, Pollock and Paul Goldschmidt thought otherwise: RBI single, two-run double, 3-1 Arizona lead.

With a two-run lead going into the bottom of the seventh and a well-rested bullpen, this was a perfect opportunity to see how Chip Hale would line up the relievers, now that all roads were no longer leading to Addison Reed. The blueprint appears to have been something like Daniel Hudson, Enrique Burgos and Brad Ziegler, but two batters in, this plan had been drenched in coffee, wadded up into a ball, and used to line a cat's litter box, as Hudson failed to retire either batter. Enter Oliver Perez, whose first pitch sailed wildly past Tuffy's left-hand side, and both runners advanced.

Perez did get a K, but the next batter looped a single over the despairing grab of Nick Ahmed, and Pollock's throw home might have been in time. but Gosewisch attempted to tag the runner without actually having the ball. Witness the following image, which highlights, from left to right, the runner, the ball approaching home-plate, and Perez backing up the thr.... No, my mistake: it shows Perez wandering aimlessly around the infield like some kind of strolling minstrel at the RenFair. As a result, once the ball got past Tuffy, the go-ahead run was able to get all the way to third: nominally a two-base error on Pollock, but he was about the least culpable here, I'd say. 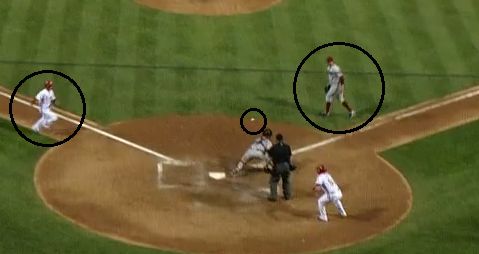 Jeff Francoeur came off the bench to pinch-hit, and before you could say, "Wait, is he still playing baseball," the SnakePit's favorite ball-player on another team had resigned from the position, driving in that go-ahead run with another single, this one coming off the third reliever of the inning, Enrique Burgos. Frenchie gonna Frenchie, of course, and he was out trying to turn it into a double, and Burgos finally escaped the inning with a strikeout, but the damage had been irreparably done. Another late lead had been nothing but a fleeting mirage, dangled in front of fans purely to provoke and annoy when it gets whipped away. Mission accomplished.

That was pretty much it. Adding insult to injury, the Phillies didn't even bother to send in their regular closer, leaving Luis Garcia out there for two innings with a one-run lead, to pick up his first career save. Ender Inciarte singled with two outs in the ninth, picking up his third hit of the game, but he was stranded there, and the Diamondbacks dropped another highly aggravating loss. Chris Owings picked up a pair of hits, and Burgos worked a scoreless eighth inning, at least saving the bullpen from further abuse. Well, further work: I imagine social media will not exactly have held back from a robust criticism of this evening's performance. 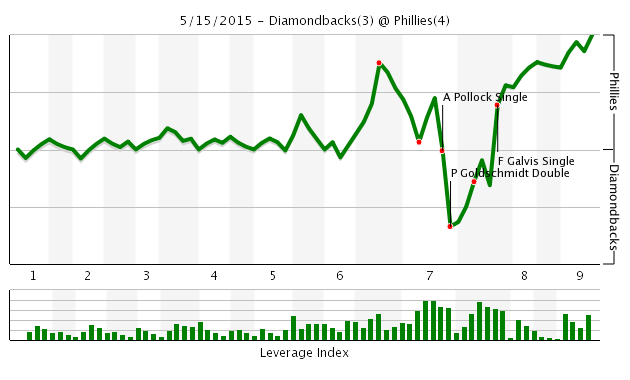 If we'd held on, onedotfive would have been a runaway winner of Comment of the Night, but instead it goes to asteroid for her riposte, after DeadmanG said, "Philles announcers are talking about the first 5-6 guys in our lineup, and how remarkable it is we aren’t over .500. They’ve obviously never seen the bottom of our order hit."

We'll try and do better tomorrow. Archie Bradley presumably comes off the DL to make the start - the team has already announced that Vidal Nuno will be returned to Reno, so he'll have to wait longer for his first win as a Diamondback. Jerome Williams starts for the Phillies.