A slugfest tonight as both starters struggled, and both offenses took advantage.

The Giants wasted no time in getting to the Diamondbacks starter, Rubby De La Rosa. He did get Aoki and Joe Panik to ground out and strike out respectively, but Angel Pagan got a double, and Buster Posey hit a home run to give the Giants an early two run lead.

That was all they managed though for a couple innings as De La Rosa showed his promise, and sat down the next seven batters in a row, including two strikeouts. Meanwhile, the Dbacks offense was making a bit of noise. Mark Trumbo lead off the second inning with his second triple in as many games, and was brought home by a fielder's choice off the bat of Jake Lamb. In the third, Aaron Hill got a two-out double to get things started. That was followed by a walk from Goldschmidt, his second of the game. Peralta then slammed a three run home run to put the Dbacks up by two.

De La Rosa's night started to go south in the fourth, however. He let Pagan draw a walk to start the inning. After that, back to back singles by Posey and Belt got the Giants within a run. He was able to shut them out, though, in the rest of the inning, and keep the damage to the one run.

In the bottom of the inning, the Giants took a bit of a hit when Brandon Belt had to come out of the game due to what is being called a groin strain. No word yet on DL trip, or if he will be back tomorrow. He was replaced by Joaquin Arias.

The Giants kept up the scoring in the fifth as well. Ryan Vogelsong lead things off with a hit, and he was moved to third by an Aoki double. A sac fly let him score. After that, Pagan grounded out, Posey was intentionally walked, and then Arias popped out to end the inning, but the damage was done, and the game was tied at four.

It wouldn't stay that way long. With one out, Paul Goldschmidt got his first hit of the season, a single. Peralta drew a walk to put two runners on for Jake Lamb. He then proceeded to put another three run home run into the stands, giving the Dbacks a three nothing lead, and leading to many Lamb-based puns in the GDT. Dbacks 7, Giants 4

And ended up being enough for the Dbacks to secure the win tonight. De La Rosa continued to struggle, getting charged with two more runs on the night. The bullpen, one inherited runner for Ziegler excluded, held the Giants scoreless over almost four innings. Addison Reed came in for and achieved his first save of the season.

The Fangraphs is currently refusing to update past the seventh inning, so maybe I or someone else will add it in later when its up to date. [Edit: and here it is!] 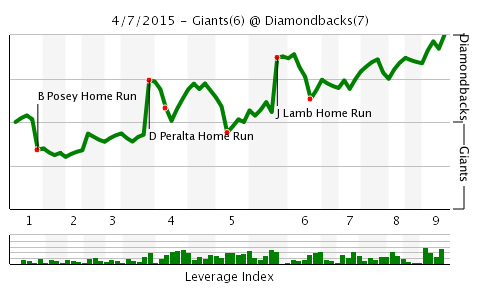 The most rec'd comment was one of mine, and the second was by Zavada's Moustache and became the title of the recap, so I'm going to go with this one, posted after Peralta's three run home run

Same teams, same time tomorrow. Hellickson gets his first start for the Dbacks, and Chris Heston replaces the DL-bound Matt Cain. See you then!