A game which had started very well, took a wretched turn when Archie Bradley was hit in the face by a line-drive off the bat of Carlos Gonzalez. Though he left the field under his own power, a significant amount of missed time seems likely.

Share All sharing options for: Archie Bradley hit in face by line drive

Note: This story contains images that may be disturbing to some viewers

The Diamondbacks had got off to their best start in quite some time, getting hits from their first four batters to take a 3-0 lead after one inning against the Rockies at Chase Field tonight. But with one out in the top of the second inning, a pitch to Carlos Gonzalez was returned with venom, striking the side of Bradley's face with a sickening crunch that was clearly audible at home on TV, and collapsed immediately to the ground. 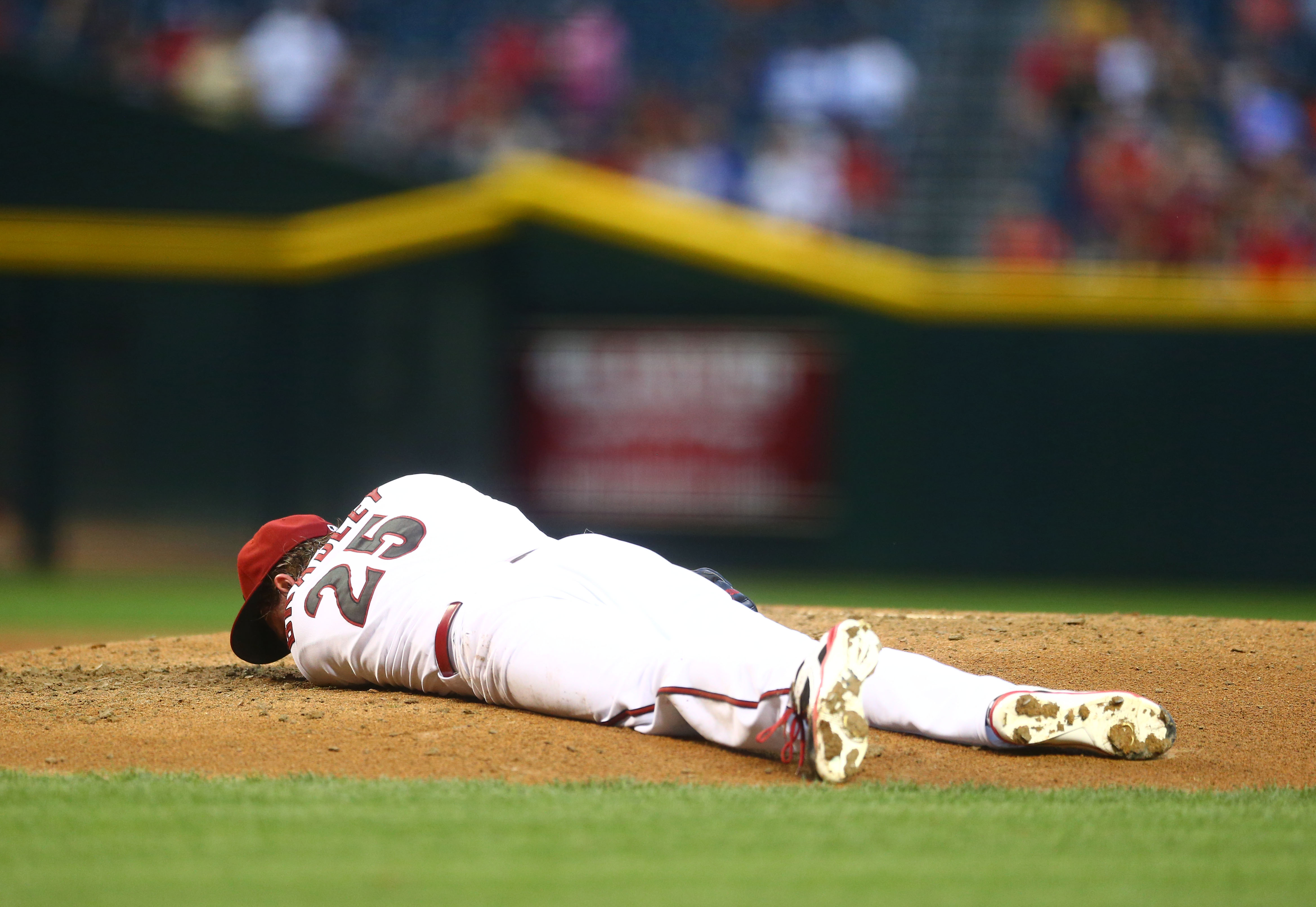 Trainer Ken Crenshaw immediately rushed to the mound, in an eerily silent Chase Field, and tended to Bradley, who didn't move for several moments. Watching the replay, it looked like the ball had caught him on the side of the head, and I was genuinely concerned it might have caught him on the temple, going by the speed at which he collapsed. However, after an anxious wait, for players, coaches and those watching both live and on television, Bradley began to stir, and got a round of applause from the crowd when he sat up. 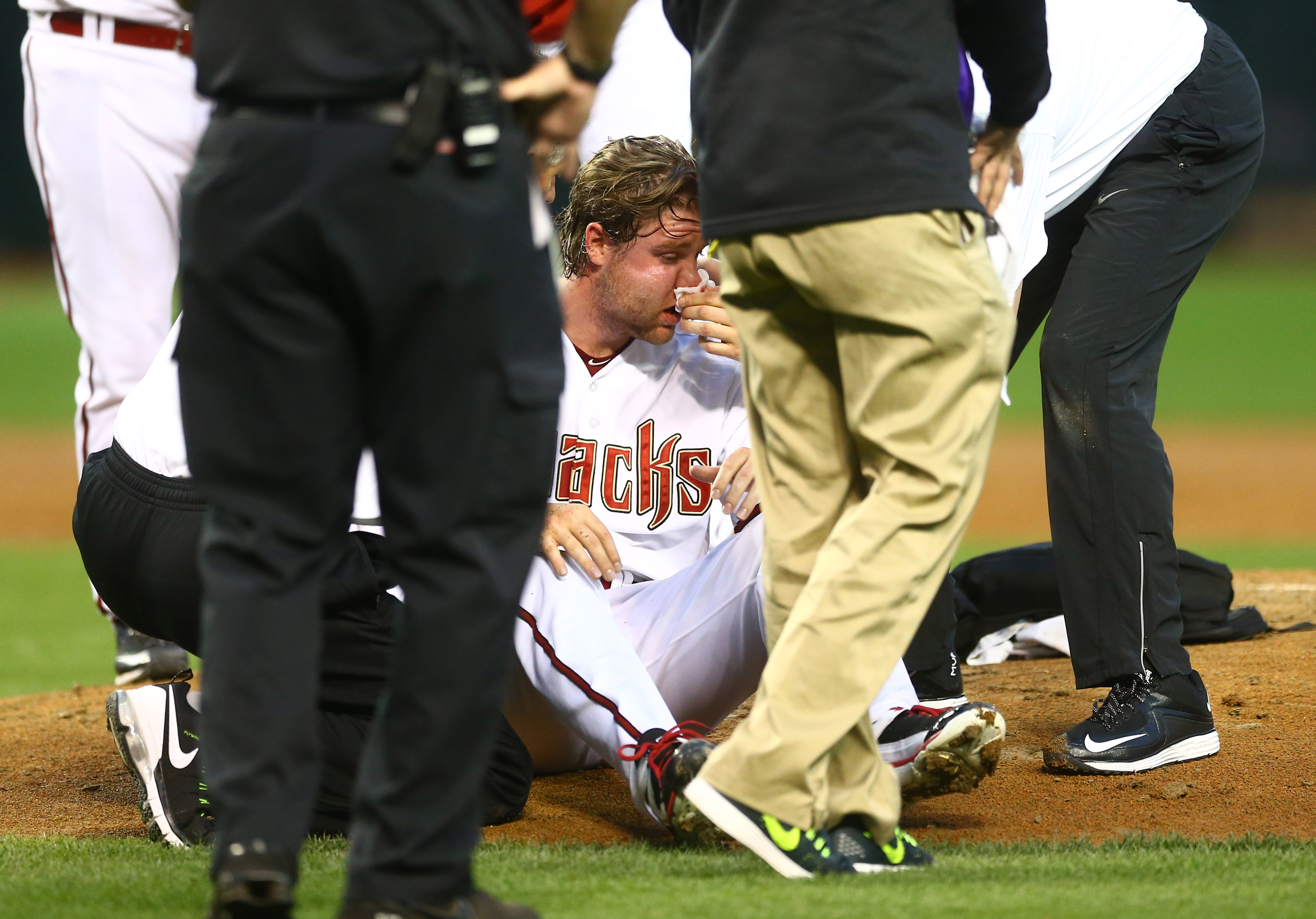 After a few more moments, Bradley was helped to his feet, and assisted off the park, but left largely under his own steam, holding a towel to his nose. However, he was alert enough to be able to give a thumbs-up to the camera near the steps on the way into the dugout. Stats indicate the ball which hit him came off the bat at 115 mph, among the ten fastest hits this season, and one can only imagine, the damage will take quite some time to repair. A fractured cheekbone seems almost certain, going by the picture below:

Trainers tend to #Ddbacks pitcher Archie Bradley after he was hit in the face by a line drive in the second inning. pic.twitter.com/Eg2J3eLMWl

Still, it's safe to say it could have been an awful lot worse. We're waiting official word on the prognosis, but another starting pitcher will almost certainly be necessary. Andrew Chafin took over for the Diamondbacks on the mound this evening, so may be shifted into the rotation as a replacement; A.J. Schugel started today for the Reno Aces, so he could also be moved into Bradley's spot without any trouble. But for now, let's not worry about that, and just send good wishes to Archie, for a speedy recovery after this unfortunate accident.

It seems like Bradley may have been the luckiest man in Arizona this evening.

There's swelling, but at this point they've found no fractures for Archie Bradley. Sounds like close to best-case given circumstances.

#Dbacks say results of Archie Bradley's CT Scan are very favorable. Will wait until tomorrow at least for final diagnosis.

He was taken to hospital for tests, but was released and had returned to the ballpark by the end of the game, and was there to greet his team-mates.

"Well it's not pretty to look at the mirror right now...Now my concern is to get healthy and get back out there." -@ArchieBradley7

A DL stint still seems likely, but with an off-day coming up, any replacement will likely be a reliever in the short term, until we need a fifth starter.

And, finally, what has to be the greatest selfie in Diamondbacks' team history...

Pretty ugly huh? In all Seriousness tho thanks for the text, tweets and prayers! Could have been a lot worse! #lucky pic.twitter.com/NasQBYWqkz