Rubby De La Rosa delivered his best performance as a Diamondbacks, and we extended out streak of quality starts by our pitchers to nine. Of course, that didn't merit a W, and Addison Reed plus weak offense dropped Arizona back below .500 again.

There have certainly been far bigger defeats this year, but this may be one of the most... annoying. On the positive side, the acquisition of Rubby De La Rosa made sense, for tonight at least, as we saw the fulfillment of the potential which had been talked about. Right from the get-go, he was throwing into the zone, and at 68.4%, his strike-rate was the highest of his four starts so far. Perhaps even more importantly, he was getting ahead of hitters, throwing a first-pitch strike to 19 of 25 batters faced. He was able to use all of his pitches tonight, and was locating them well. The eight strikeouts tied a career high, set three times last year with Boston and once in 2011 with LA.

Early on, there was a fair amount of traffic on the basepaths: a Cliff Pennington error (admittedly a fairly tough play) and stolen-base led to a runner in scoring position in the first, and a two-out double that bounced into the pool area in the second repeated the damage. Even the run allowed was somewhat attributable to poor fortune, as the double which came around to score just squeezed down the first-base line, between Paul Goldschmidt's despairing grab and the foul line. But De La Rosa retired the last ten batters faced, and ended the night with a line of one run over seven innings. on four hits and no walks, taking an economical 98 pitches.

Unfortunately, the other side of the equation was equally as lacking in production as last night. For once, it was the bottom of the order who seemed to be getting on base more often, at least early on. We got our first base-runner in the second, when Chris Owings singled, and manufactured a run when he stole second, then came home on Tuffy Gosewisch's single. Cliff Pennington then reached on a bunt single - with the pitcher's spot up next, the Pittsburgh defense wasn't expecting that. I can kinda see the use of the move: even if De La Rosa made an out (as he did), at least it cleared the pitcher's spot for the next inning.

But the top of the order didn't do much the second time through either. Owings got the next hit for Arizona, and again stole second. However, this time Tuffy couldn't come through, and the Pirates intentionally walked Pennington, allowing De La Rosa to make another out with two men on base. The fifth, sixth and seventh saw the D-backs send the minimum to the plate, with an Aaron Hill single in the sixth our only base-runner, immediately erased by an Owings double-play. Though that was somewhat unlucky, the ball ricocheting off the pitcher's mound, right to the Pirates' second-baseman for a tailor-made DP.

With their starting pitcher A.J. Burnett lifted after seven innings too, there was hope the offense might find the Pittsburgh bullpen easier prey. Brad Ziegler came in for the top of the eighth, becoming the pitcher with most appearances ever in an Arizona uniform, retiring the side in order. And the top of our line-up finally remembered what they did, Ender Inciarte legging out an infield hit on a high chopper to third, and A.J. Pollock then singling to center. With Chase Field rockin', Goldie came up, but could only ground out, albeit advancing the runners. Mark Trumbo then fouled out to first, and Aaron Hill struck out swinging. The sense of imminent loss was palpable.

Indeed, some would argue, the loss became less a sense and more a foregone conclusion, as Addison Reed entered the game for the ninth. After retiring the first two batters faced, he gave up a loud double into the left-center gap by Neil Walker. Starling Marte then singled just past the despairing grab of Pennington, Walker motoring around to give Pittsburgh the lead. Perhaps worth noting, Reed fell behind both of those hitters 2-0. He gave up another hit before finally getting out of the inning. The damage had been done: perhaps the silver lining is, the frame having taken 32 pitches, Reed probably won't be available tomorrow.

Not that the Pirates' closer, Mark Melancon, had been nails this season. With one out, Gosewisch notched his second hit of the game, and the tying man was pinch-run for by Nick Ahmed. He tried to steal second, but was thrown out; it's the kind of play that is great if it works, but when you're down to the bottom of the ninth, you need to be sure it will succeed. Pennington then worked a walk, bringing up pinch-hitter Yasmany Tomas, but after working the count full, he grounded out to second, and the Diamondbacks had lost consecutive games for the second time this season, the previous occasion being the last two games in San Diego. No happy ending to Goldie Hat Night... 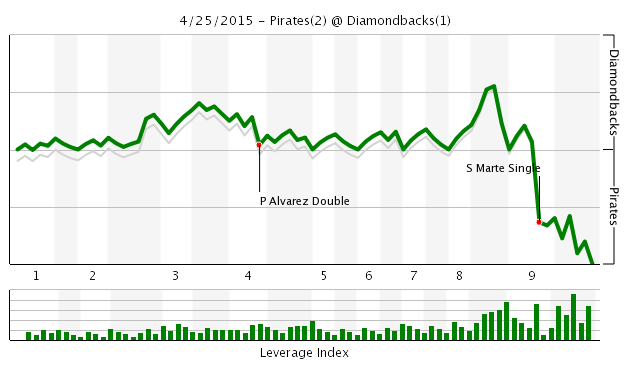 pulls the plug on Reed as closer at some point, this is unbearable to watch

We will try and avoid the first sweep of 2015, in either direction, tomorrow afternoon, with Jeremy Hellickson going up against Francisco Liriano. Be nice if the bats remembered this is a hitter's park.