The D-backs were unable to climb out of an early deficit, dropping this one to the Pirates.

It was a less than ideal start for the Dbacks, after Gregory Polanco reached base on a fielder's choice, stole 2nd, went to 3rd on a sac fly to right, and scored on a Neil Walker single. This was the only run which would score in the first though, giving the Pirates an early 1-0 lead.

In the bottom half of the inning, Gerrit Cole did what he seemed to do all night. He allowed one base runner, this inning allowing a Goldy walk, then easily got out of the inning.

The top of the 2nd brought more trouble to Collmenter, where he allowed two 2 out singles. Josh Harrison hit a double into the gap between center and right field, but was thrown out by Chris Owings trying to stretch it into a triple. 3-0 Pirates. Of note on this play was a nice pick by Yasmany Tomas to get Harrison out. Good to see him field the position well. After this inning, Collmenter wouldn't allow another base runner until the 7th inning, mowing through the Pirates lineup from the 3rd inning on.

The Dbacks would show flashes of offense in the 3rd and 4th, putting a runner on 2nd in both innings. The rally was stopped by a Goldy groundout in the 3rd, and a Trumbo TOOTBLAN in the 4th. Trumbo's TOOTBLAN made no sense at all. He was thrown out by a couple steps trying to go from 2nd to 3rd on a ground ball to short.

After a hitless 5th, the Dbacks finally scored in the 6th. Goldy and Tomas both singled to put runners on 1st and 2nd for Chris Owings, 2 outs. He hit a grounder up the middle which was stopped by the second baseman on a very nice diving stop. Goldy, running hard all the way, scored from 2nd on a very close play at the plate, helped by a poor tag attempt by Pirates catcher Francisco Cervelli. 3-1 Pirates. I love Goldy. Tuffy was unable to drive in Tomas at 2nd, leaving the score 3-1 at the end of the 6th.

Collmenter was pulled from the game in the top of the 7th after allowing a leadoff double to Starling Marte. He finished with a solid line of 6 IP, 6 H, 3 R (all earned) 0 BB, 3 K on 86 pitches. Another solid outing from Josh, especially after that 2nd inning. Love to see the 0 walks. Oliver Perez would relieve Collmenter, getting Corey Hart to go down swinging. He was followed by Brad Ziegler, who got 2 consecutive outs to keep the score 3-1

Nothing exciting happened in the bottom half of the inning. Sad face.

The eighth inning saw more Evan Marshall struggles. After a 2 out walk to Andrew McCutchen, Neil Walker hit a bullet of the centerfield wall to make the score 4-1 Pirates. Marshall would finish the ballgame, not allowing another run.

The bottom of the eighth contained another missed Dbacks opportunity. After a 2 out walk from Tomas (a great at-bat from him), Gerrit Cole was pulled from the game. He allowed 1 run on 7 hits and 2 walks, a great performance from him. Tomas would take second while the pitcher was still in the set position. A bold, impressive move from Yasmany. Chris Owings failed to capitalize though, striking out on a slider down in the zone.

Neither team would score in the final inning, with Mark Melancon getting the save for the Pirates. Pirates 4, Dbacks 1. Game over. 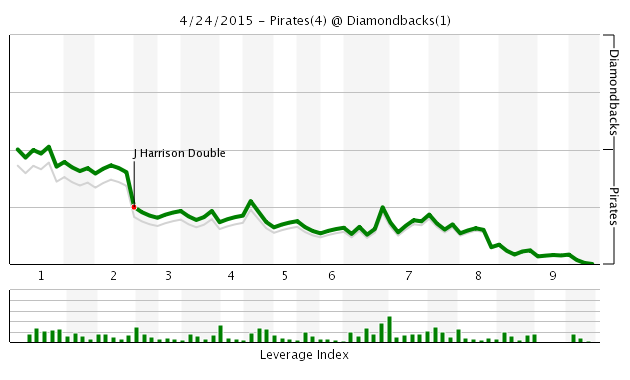 is now getting yasmany hits as he can

by Clefo on Apr 24, 2015 | 8:11 PM reply rec (6) flag actions
Many thanks to the asteroids for facilitating a very entertaining time at Chase Field this evening: just a shame the D-backs offense couldn't play their part in proceedings. We reconvene at Chase Field tomorrow night, when Rubby de la Rosa will try to even the series, going up against A.J. Burnett.