With today's off-day, let's see how our hitters have been playing their part in the season so far.

Share All sharing options for: Breaking down the early Arizona Diamondbacks offense

The bottom line is scoring, and through last night's contests, the Diamondbacks are third in the league, having averaged 4.60 runs per game. The National League West has been a true powerhouse so far, holding the top three spots: the Dodgers (4.79) are in second, and the thoroughly revamped Padres are far and away the leaders, with 5.25 runs per game. For completeness, the Rockies are sixth at 4.33, and the Giants are the only team in the division which are below National League average, sitting in 13th at 2.98. Overall in the league, run scoring is up one-tenth on 2014 at 4.01, but we're scoring markedly more compared to last season, when we were at 3.80.

That's great, but I'm seriously concerned it isn't sustainable, because as shoewizard pointed out in the comments on Monday, the team overall has not been hitting like that. The Diamondbacks' OPS is only .682, which is only eighth-best, and below league average (.688). The most obvious cause is good clutch performance, but that doesn't particularly seem to have been the case for Arizona. With runners in scoring position, we are ranked 8th as well, with an OPS only fractionally above league average (.724 vs. 715). We do hit well with a man on first, but that seems to explain only a couple of additional runs so far.

A bigger impact is probably the Diamondbacks being able to take advantage of opponents' errors. So far, there have been a total of 92 unearned runs off National League pitching, so average is about six per offense [interleague play makes it hard to be precise]. Arizona so far have scored almost double that, at 11 unearned runs - it's an average of 0.73 "free runs" per game for us, when NL average allowed is 0.41. We saw, just last night, how that can turn a game around, as after Bradley's very wobbly first inning, the Rangers defense gifted the Diamondbacks the lead right back. But I'm not sure we can rely on this going forward.

Breaking it down by position

The overall numbers do conceal a wide range of production from the various spots around the diamond. The chart below shows the Diamondbacks' OPS, split by position, and how this compares to National League production at the same place. [I've excluded entirely National League designated hitters, as we have yet to play in any American League parks, so there's no comparative figure] 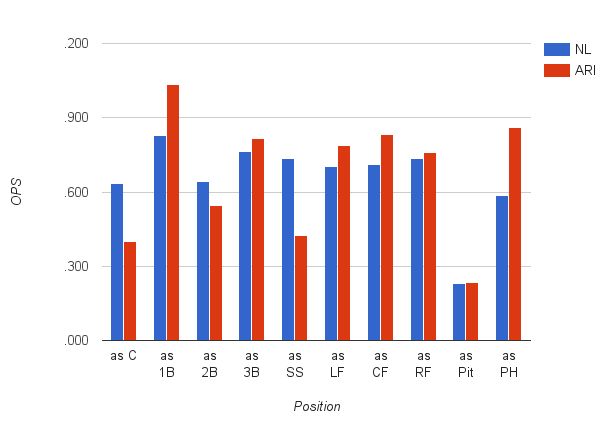 First-base has been the engine-room, powering the offense, but there have also been significant contributions from third, as well as left and center field. Arizona's pinch-hitting has also been off the charts good: the National League triple-slash line to date is 188/.272/.312, while the Diamondbacks coming in from the bench are at .316/.440/.421. That's the best in the league, and it isn't even close. The resulting OPS of .861 is more than a hundred points better than the second-placed franchise, and is unlikely to continue at that level. However, the relatively small volume of these (only 25 plate-appearances) reduces the overall impact of this.

On the other hand, our catcher and shortstop positions have both been gurgling vortices of suck. This is my unsurprised face, since just about everyone expected Tuffy Gosewisch and Nick Ahmed to be the weak links in our offensive chain coming into the season. Thus far, the other hitters appear to have been able to make up the lost ground, in terms of overall production - but I'm not certain that'll last, if the opposition stop handing us extra outs and free runs. I note, thus far, SS overall have been much productive than usual. Last year, they were ahead only of 2B and PH, but in 2015, they're almost identical to RF, with just the corner infield positions hitting significantly better.

The Grand Canyon is one of the iconic landmarks of Arizona. However, the general perception is that equally a large chasm can be found in our batting order, with a dramatic drop-off from the bottom part of the order - largely due to the output of shortstop and catcher positions. Has that been the case? Here's how our OPS compares, up and down the batting order: 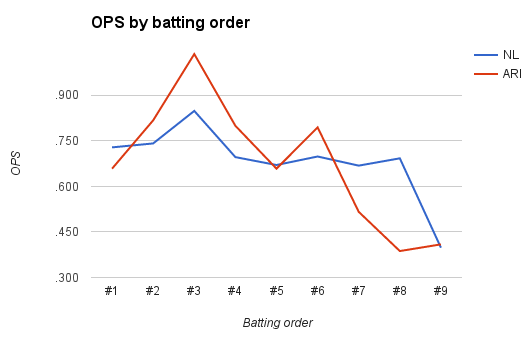 To some extent, this does match the reputation: the seventh and eighth spots in the order have been terrible, to the extent that the latter actually has a lower OPS than the ninth, which is traditionally (up until last night, anyway!) the pitcher's spot. This is partially due to the weakness of Ahmed, but also reflect the strong performance, as noted above, of our pinch-hitters, most of whom have been in this spot. But it's also worth noting that the lead-off position has not been as productive as you might have thought. Pollock and Inciarte are both hitting below a .700 OPS from the #1 position, and with just two stolen-bases, the same as the number of times they've been caught.

But there's no denying the last three in our order have been near-automatic outs. Even excluding the pitchers, and including those successful pinch-hitters, slots #7-9 have a triple-slash line so far of .189/.278/.213, a woeful .490 OPS. If that's sustained, it would be the worst production out of those positions in recorded baseball history. Since the start of the live-ball era in 1920, the lowest OPS over an entire season from the bottom third is .514, by the 1963 Mets. No team during the past three decades has been below .547. If they want to avoid joining the list, Tuffy and Nick need to be hitting a fair bit more than they have done so far.