Diamondbacks fans could be forgiven for a sense of foreboding when the lineups were released, and Jake Lamb was on the bench for some reason. Aaron Hill’s .143/.143/.143 slash line against Tim Hudson coming into the game certainly didn’t inspire confidence. Current Diamondbacks hadn’t done much better, with a slash line of .203/.257/.348, and that was including Gerald Laird. Without him, that average dropped to .177. The leading Diamondback in terms of OBP was Jordan Pacheco, but more on that later.

Despite the history against Hudson, the D-backs got off to an almost perfect start. After AJ Pollock singled, Paul Goldschmidt demonstrated his ability to do multiple things at one time, as he gave the Diamondbacks the lead and fulfilled SongBird’s birthday wishes simultaneously with a blast to left. However, Jeremy Hellickson (albeit with a bit of bad luck) seemed destined to give up the lead. Two base hits and a sacrifice fly made it 2-1, but the hardest hit ball of the inning brought some good luck, as it went straight to Aaron Hill at third, starting a 5-4-3 double play and ending the inning.

Hellickson ran into more trouble in the 2nd, giving up a leadoff single to Brandon Belt. That was clearly a ploy to get another double play, and Casey McGehee obliged, this time hitting to Ahmed at short to start the 6-4-3. Andrew Susac picked up the fourth Giants hit of the day, BABIPing one into the Bermuda Triangle between Ahmed, Pollock, and Inciarte (and you know with those three, it was placed just right.) Hellickson, meanwhile, was struggling to hit the zone walking Brandon Crawford, bringing Tim Hudson to the plate, who was ready to end his 44 at-bat hitless streak. He failed, but only thanks to an incredible diving catch by Pollock, keeping the D-backs up 2-1.

The Diamondbacks broke it open in the third. After Inciarte failed to reach base, Pollock picked up another single, bringing up Goldy for another shot at Hudson. This time, Goldy worked a walk. After Trumbo lined out to CF, Aaron Hill drew a walk, albeit a controversial one. Ball four was right at the top of the zone, and a better catcher than Susac likely would have framed the pitch and gotten the call, but after the umpiring last night, I’m not going to complain. This brought Jordan Pacheco to the plate. He had two career walks against Hudson coming in. This time, he picked up an RBI HBP. Pacheco may not be liked by advanced metrics, but he certainly is moneyball against Hudson. He has yet to get a hit (going 0-for-2 against Hudson today) but his OBP is .500. By virtue of having his body in the batter’s box, he picked up his second RBI. Good things happen when you get on base. Chris Owings had a high chopper ruled a single and an error in the second inning (in my opinion, it should have been a two-base error.) Perhaps that was the slump buster he needed, as he lined a single to right to score Goldy and Hill and give those of us in Arizona tacos.

Shockingly, there was no more scoring the rest of the way. There wasn’t even much of a credible threat, as Hellickson far exceeded our expectations, Hudson calmed down, and the Giants bullpen shut things down when he left. Highlights were Trumbo making a decent play in the third, another double play turned by the infield, more hits from Owings and Pollock (I believe Pollock now leads regular players in batting average), and, in the ninth inning, a first hit for Yasmany Tomas (and it could have been an RBI, had Nick Ahmed not failed to move Owings over.) Pacheco also looked pretty serviceable behind the plate, giving Tuffy a day off.

Despite some angst in the GDT, Addison Reed set down the Giants in order in the 9th, which did not earn him a save, but perhaps earned him a small amount of goodwill. 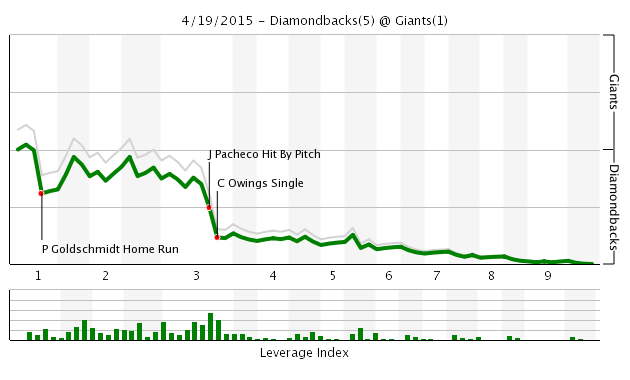 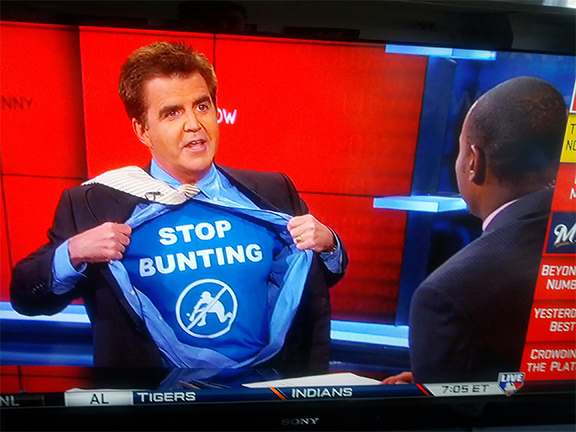 Time for a week with only five games, as the D-backs have both Monday and Thursday off, with a two game series against the Rangers (fresh off scoring 10 and losing in Seattle) and a three game set against the Pirates. Tomorrow will be our first off day coming off a series win in something like forever. It’s good to finally win a road series; now we get to see how the team builds on it.