Diamondbacks 1, Giants 4: Bored of the Rings

The Diamondbacks watched the Giants receive their World Series rings from the top step of the dugout today. They then completed the chivalrous gesture, by the offense rolling over and letting San Francisco end their eight-game losing streak.

Share All sharing options for: Diamondbacks 1, Giants 4: Bored of the Rings

After Arizona went down in order their first time up, the Giants took over, and were apparently reminded that were the reigning World Series champions, and should damn well play like it. Nine pitches into the game, we had seen a pair of hits and a walk, San Francisco having a 1-0 lead with two men on base, and Rubby De La Rosa not yet having retired a batter. He recovered without further damange, but some shaky defense led to another Giants run in the third inning. With one out, the ball was hit back to De La Rosa, but he only slowed it down for an infield hit. A Tuffy Gosewisch passed ball advanced the runner, who then scored on a single.

In between those, the second inning showed some promise, with Giants' starter Chris Heston struggling with his mechanics, and exhibiting significant wildness. With one out, Mark Trumbo and Gosewisch singled, but Chris Owings was then rung up on a pitch outside the zone, which should have been ball four. Instead of the bases loaded with one out, there were two down, and although Nick Ahmed walked on four pitches, to fill the pond full of Arizona ducks, De La Rosa grounded out weakly on the first pitch he saw

From there until the end of the eighth inning, we had only three at-bats with anyone on base. David Peralta did homer, leading off the fourth inning. which made the score 2-1 and it looked as if we might claw our way back into this one and spoil the San Francisco party. However, in the bottom of the fourth, De La Rosa handed the run back and more, allowing a two-run homer to Brandon Crawford with one out, putting the Giants 4-1 up. Rubby did go on to pitch into the seventh for the first, and this was arguably his best outing so far, allowing three earned runs in 6.2 innings, with seven strikeouts. But nine hits and two walks isn't a recipe for success.

Evan Marshall eventually dismissed the runner he inherited from De La Rosa, though only after a hit and a wild pitch had put two runners in scoring position. Oliver Perez pitched the eighth and went one better, loading the bases before putting up a zero. Meanwhile, Arizona continued to struggle against Heston. Paul Goldschmidt had a one-out double in the sixth, but was stranded after a pair of groundouts, and Jake Lamb pinged an infield single off Heston in the eighth, ending the starter's night. Three starts in, he has an 0.87 ERA. Keep that up, and Lamb could have some competition for NL Rookie of the Year.

Things did get marginally interesting in the ninth. With one out, Trumbo picked up his second hit of the night, and Gosewisch was then hit by a pitch, to bring the tying run to the plate with one out, in the shape of Chris Owings. However, any thoughts of late heroics were quickly quashed, as he hit into an inning- and game-ending double-play, though the home team's celebrations were briefly delayed while Chip Hale decided whether to ask for a review of the out at first. He opted (correctly) not to bother, and the Diamondbacks' small, two-game winning streak ended, with the team back at .500. 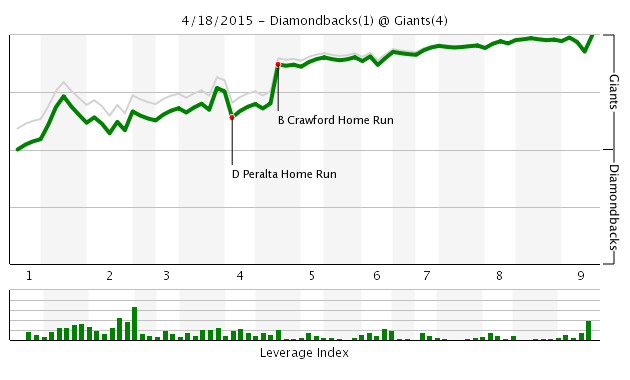 There was a Gameday Thread. It was relatively quiet and disinterested compared to the last couple of nights, falling short of 400 comments. DbacksSkins, JoeCB1991 and freeland1787 were the top three, with these others also present: Alfred E. Neuman, AzRattler, BIGredmc, DbacksAbroad, Diamondhacks, GuruB, James Attwood, Jim McLennan, Makakilo, MrMrrbi, TheGoldenSombrero, Xerostomia, bbtng, coldblueAZ, dbrowell, hotclaws, jinnah, overkill94DT, preston.salisbury, rd33 and soco. Comment of the night, in a small landslide, to the only red comment, from soco in response to a hotclaws comment about World Series rings being a "tad" ostentatious:

Then we're not trying hard enough

Just because you made it warm doesn't make it yours.

The series, and the road-trip, wraps up tomorrow afternoon, with Jeremy Hellickson taking on Tim Hudson, in a battle of pitchers who are both still seeking their first win of the season. Will either get it? Can Arizona pick up a road series victory, or will they have to settle for a split? Find out in tomorrow's, hopefully slightly more gripping, installment of the Diamondbacks' 2015 campaign...