The Dbacks offense came alive in the 9th, putting 4 runs across the plate, but earlier pitching struggles proved to be too much as the Dbacks fail to complete the sweep.

The Dbacks struggled all day on both sides of the ball in a 7-4 loss to the Dodgers. Even when you score 4 runs in the 9th, you need to do better in those other 8 innings to have a chance.

The game began with a Jimmy Rollins single to right, followed by outs for both Puig and A-Gon. Rollins was picked off of 1st by Collmenter, eliminating that threat quickly. He must've been taking notes on baserunning from the snakepit's favorite player, Yasiel Puig. The Dbacks were unable to do anything (a phrase you may read often) offensively going down 1-2-3.

The top of the second saw a bit of a scare after Ethier went all Mark Trumbo style with a triple off the overhang, but this threat was dismissed with a groundout to 3rd. After 2 quick outs, the heart of the offense Tuffy Goesewich was able to get the first hit of the game for the Dbacks, but Pennington did not approve of this thing called offense, so he did what he thought was right and struck out.

The Dodgers put the first run on the board in the 3rd with a sac fly from Rollins, scoring Joc (yes, Joc) Pederson. Collmenter would later get Gonzalez out to escape the inning with only one run allowed. 1-0 bad guys. The offense continued to disappoint in the home half of the inning. After Nick Ahmed got to 3rd by way of a sac bunt and sac fly, Inciarte made us sad with a lineout to 2nd.

The Evil Empire rattled off a series of 4 weak singles to begin the 4th, scoring 1 run in this sequence. With the bases loaded, Collmenter came up big, getting Greinke out on a called strike 3, followed by a groundout to Penny at 2nd. Goldy began off the 4th with a LEADOFF HOME RUN strikeout looking. After Peralta grounded out to the second baseman, Lamb excited everyone by hitting a single. Sadly, it was all a mirage. He was almost immediately caught trying to steal 2nd.

Puig gave everyone in the ballpark a scare with a ball he killed down the left field line, but luckily it went foul. Then Puig killed one that was not exactly foul. 3-0 Dodgers. Adrian Gonzalez tried to go back to back, hitting a ball that was a bout a foot short of being gone. The Bearded One would end up stranding A-Gon, to finish off both the 5th inning and his outing (Aaron Hill would pinch hit for him in the bottom of the fifth). The decision to take out Josh would come back to haunt the Dbacks. He finished up with a line off 5 IP, 9 H, 3 R, 3 ER, 1 BB, 1 K on 73 pitches.

We really need longer outings from him and our other pitchers in order to compete. At least we have our bullpen to pick us up, right? Ha. The bottom of the fifth was as uneventful as the rest of the innings up to this point. Tuffy and Ahmed both got on base (making them the only Dbacks to have gotten on base in both PAs today) but both Hill and Pollock were unable to drive them in.

A.J. Schugel would come into the game making his MLB debut. It did not go as well as Archie's yesterday. It started off well, with a groundball right back to him. The second batter, Joc Pederson, went yard. Welcome to the show. 4-0 Dodgers. He got into trouble later in the inning, but was able to escape without any more damage being done. In the bottom of the 6th, the 2-4 hitters went down in order. Woo.

Schugel came out again to pitch the 7th inning, and after a series involving a few hits, a double play, and 2 intentional walks, he allowed another run. 5-0 Dodgers. The Dbacks did nothing in their half of the inning. This is my unsurprised face. Thankfully, this was Greinke's final inning. He finished with a very impressive line of 7 IP, 5 H, 0 R, 0 ER, 0 BB, 7 K on 102 pitches.

Let's go to the 9th inning, because nothing happened in the 8th. Oliver Perez pitched for the Dbacks, and allowed a 2 run homer. Good work Ollie. For in the bottom half, things got exciting. After a David Peralta strikeout, Jake Lamb singles, Chris Owings (pinch hitting for Perez) doubles to get his first hit of the season, and Cliff Pennigton walks. Nick Ahmed would strikeout, but Jordan Pacheco would give us all hope with a bloop single. A.J. Pollock really got the crowd excited though, with a 3 run double. Inciartre would end the rally after this with a flyout to left center, but it was still good to see this team fight till the end.

The win probability graph is sad. In honor of the Masters ending today, let's use golf words for describing people! 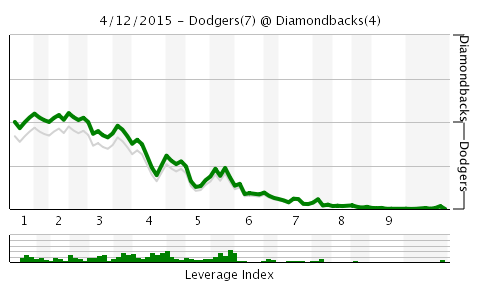 "Seager is sexy, and Flower is best"

The D-backs travel to San Diego to take on the Padres. Josh Collmenter will face off against Andrew Cashner Monday. Well, that concludes this recap. I suppose I should probably go get that preview for the Padres' series finished up...