Diamondbacks 4, Dodgers 3: Not all those who wander are lost

With Sean Astin throwing out the first pitch tonight, I was going to go with a whole Lord of the Rings themed recap. But I don't want to get into any bad hobbits...

Share All sharing options for: Diamondbacks 4, Dodgers 3: Not all those who wander are lost

"It's like in the great stories, Mr. Frodo. The ones that really mattered, full of darkness and danger they were. Sometimes you didn't want to know the end, because how could the end be happy. How could the world go back to the way it was when there's so much bad that had happened? But in the end it's only a passing thing, this shadow; even darkness must pass."
-- Samwise

In the early going, it looked like Chase Anderson was going to fall victim to the curse of our our other starters: the short start, as It took him 25 pitches to get through the first inning. Anderson gave up a two-out single to Adrian Gonzalez - that's three bases better than many pitchers have managed - followed by a walk, but escaped the inning. He then settled down, retiring the Dodgers in order their second and third time up, The first time through our order, the Diamondbacks didn't make much noise either, a two-out single for Goldschmidt and a walk to Tuffy Gosewisch being our only base-runners, though there were some fairly lengthy fly-ball outs to the track.

That changed when our hitters got a second look at Brett Anderson. A.J. Pollock and Ender Inciarte both singled up the middle, and Goldschmidt followed with his first home-run of the season a three-run shot into the pool area. Our third home-run of the season: our third three-run shot. Coincidence? Or something more sinister? However, the Dodgers struck back immediately, getting a long two-out home-run, which would have been more than a solo shot, if not for the fortunate double-play ball that immediately preceded it. And worse was to come, as Anderson gave up three hits in the fifth, the last a two-run double that tied the game, after Chase missed his location.

That 32-pitch fifth ended Anderson's night, so the streak of short starts continued: we still haven't had anyone make it through the sixth inning. Chase threw exactly 100 pitches, striking out six but walking three, and allowing three runs on five hits. It was probably the best outing by a member of our rotation this year... and it still wasn't very good. However, credit Andrew Chafin for coming in and locking things up. He retired all nine batters faced, without letting the ball out of the infield, and even managed to retire Gonzalez, ending a streak of 10 consecutive times on base. [It took a diving stop from Hill, playing 3B but operating somewhere north of SS thanks to the shift]

The D-backs offense was continuing to struggle for traction, outside of Goldie, who picked up three of the six hits we had through the first eight innings. Pollock, Inciarte and Mark Trumbo had the others, all singles, though Trumbo was the beneficiary of a fortunate scoring decision, as his hit with one out in the sixth could easily have gone in the book as a two-base error on Juan Uribe, who sailed a throw from third way over the head of the first baseman. That was the first time we had a runner in scoring position since Goldie's homer, but we were unable to do anything, as Hill grounded out and Owings - who is still looking for his first hit of 2015 - struck out.

With the game still tied at three after eight, the contest effectively became sudden-death, decided by which bullpen blinked first. And Addison Reed closed one eye and appeared to have something in the other, putting two on, with the go-ahead run on third, before getting Andre "Did you know he went to ASU?" Ethier to ground out. Arizona did nothing in their half of the ninth, so we headed on into our first extra inning game of the 2015 season. Just what the bullpen wanted to see...  Oliver Perez allowed a one-out single to Puig (on a diving trap by Pollock - fortunate, since Trumbo made no effort to back up the play) but followed with a double-play from Gonzalez.

With one out in the tenth, Cliff Pennigton drew a walk, then advanced to second on a wild pitch. On a three-ball count to Pollock, Cliff took off, and made it to third as Pollock drew a walk, putting the winning run 90 feet away. Ender Inciarte came in, as the Dodgers went to an extra man on the infield, pulling Yasiel Puig to try and cut the winning run down at home-plate, or escape the inning with a double-play. However, Inciarte was entirely undeterred, whacking merrily at the first pitch, and sending it through the right-hand side, allowing Pennington to scamper home. For as Lady Galadiel once said, "Even the smallest person can change the course of history."

That was a good win, though with the bullpen having to work another five innings, we wonder if the cost of the battle will end up too much. The hero was undoubtedly Andrew Chafin, throwing three perfect innings when we needed them most. Credit also Chip Hale (presumably) for the gutsy move of sending Pennington aggressively, to try and force the issue. But there are also an awful lot of Gollums in the line-up, and we need our starting pitchers to go deeper. We can't have the bullpen working four or five innings every night, when we are, as now, playing 10 games in a row. Here's to that changing tomorrow... 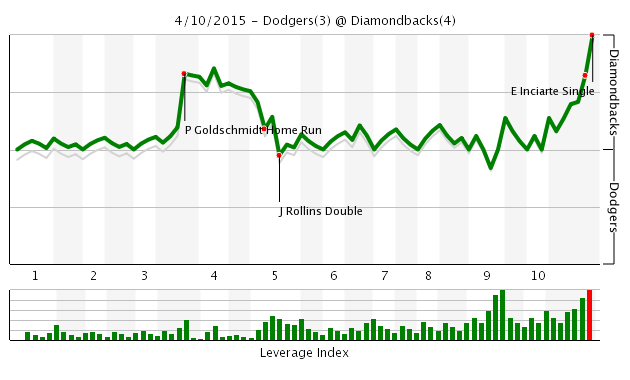 Tomorrow, of course, sees the most anticipated major-league debut in a long time. I refer, naturally, to the Hello Kitty bobblehead, which is sure to draw thousands of eager fans to Chase Field. I vaguely recally there's some n00b pitching for the first time as well, but dunno what all that's about...