In a close finish, Archie Bradley's debut, in which we beat Clayton Kershaw, just edged out the comeback win over the Cubs to take the AZ SnakePit award for game of the year. Here's the recap, with bonus video highlights

Archie Bradley was everything Arizona fans could possibly have wanted for the Diamondbacks in his major-league debut. So was Clayton Kershaw.

In my time here, there have been some really great contests I've been lucky enough to attend at Chase. Game 3 of the 2011 NLDS. Gonzo's #20 retirement, where Chris Young led off with one home-run and walked off with another. Tonight will be filed alongside those contests for sheer volume of unadulterated awesome: it was one of the most entirely enjoyable times I've had at the ball-park. Really, you could not have drawn things up more perfectly, if you had handed me a pen and asked me to script the night's proceedings.

It certainly didn't seem likely that Bradley would break the five-inning curse in the early going: not that he was bad, more that he was simply throwing too many pitches. He got the outs, but the first time through the Dodgers order, the number of pitchers per plate-appearance were: 7, 7, 6, 9, 7, 2, 4, 4, 8. It looked like the Diamondbacks bullpen was going to be in for another long evening, especially in the fourth inning after a walk was followed by a double, to put runners on second and third, with one out. But Bradley regrouped, getting a huge strikeout of Andre Ethier (did you know he went to ASU) and a groundout to escape the jam.

Something seemed to click thereafter, almost as if he realized his stuff was good enough to play in the major leagues, and he didn'[ need to nibble around the edges of the plate. He struck out the side on 14 pitches in the fifth inning, and we wondered whether he would come out for a sixth, his pitch-count being at 93. As mentioned in the preview, that was already more than most recent 22-year-olds have thrown in their debut, but he took the mound again in the sixth. Bradley worked around a two-out walk to Adrian Gonzalez, and left the mound to a standing ovation, having thrown six shutout inning, allowing one hit, four walks and six strikeouts.

Meanwhile, the offense chipped away nicely at Clayton Kershaw, particularly the top half of our order: slots 1-4 finished the night combining to go 8-for-15 with all six of our runs driven in, scoring four of them. Things got under way early, with A.J. Pollock and Ender Inciarte singling in the first, Pollock then being singled home by Mark Trumbo. The same duo also led off the third inning with singles [Bradley having got his first hit in the meantime, then been promptly picked off first to end the second!], a double-steal then allowing Paul Goldschmidt to make it 2-0 with a groundout..

The advantage was doubled in the fourth. Chris Owings may want his first hit of the season, but walked to lead things off, and a single from Tuffy Gosewisch put runners on the corners. Nick Ahmed walked, and after Bradley fouled out, Pollock's third hit of the night and an Inciarte groundout gave the Diamondbacks a four-run lead. You want icing? Let me suggest a slice of the seventh, where Pollock drew a walk to reach base for the fourth time, and Goldschmidt followed with his second home-run of the second, 411 feet into the left-field bleachers, chasing a sad Amish farmer off the mound, his streak of 24 consecutive games allowing three or fewer dead and gone.

Meanwhile, Brad Ziegler worked the seventh and eighth innings, getting five ground-balls and a K, and Randall Delgado posted a scoreless ninth, though did allow the night's second hit for Los Angeles. This is clearly not acceptable, Randall, and we will expect better going forward. All told, a two-hit shutout was the best collective pitching performance for Arizona against Los Angeles in Phoenix for almost exactly 14 years: on April 10, 2001, Curt Schilling tossed a complete-game performance, walking none and fanning 10. Yes, definitely a thoroughly satisfactory performance from all concerned. 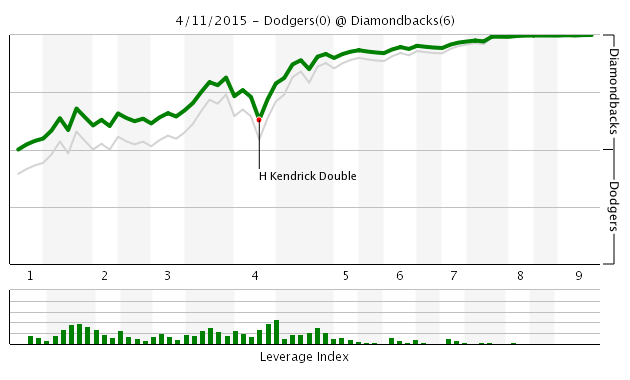 Comment of the night to ZM, albeit with an honorable mention to Xipooo for his oversized first-pitch pic. We'll look forward to looking back at this game when Bradley is inducted into Cooperstown...

And so, we find ourselves going for the sweep tomorrow afternoon at Chase Field. Those are words I seriously did not expect to be writing at this point, when the series began. Arizona turns to Opening Day starter, Josh Collmenter, and will be looking to improve significantly on his performance there, while the hitters will have to solve the thorny problem which is Zack Greinke.