Diamondbacks 5, Astros 3: All together now...

"Summer!, and the gang's all here - we've got green grass, red hots and ice-cold beer. We're baseballs' faithful Diamondback fans, backin' our home team back in the stands..."

Share All sharing options for: Diamondbacks 5, Astros 3: All together now...

The final game of the 2015 campaign saw the D-backs with a potential part to play, as their result could help determine the AL West title, the second AL wild-card and home advantage in the AL wild-card game. For this final recap, I called upon the collective wit and wisdom of the Gameday Thread, for inning by inning recaps of the game as it unfolded...

1st Inning (GuruB) - Ray started the first inning allowing a seeing eye ground ball double to Springer with one out, but got a lineout to Lamb and a perfectly placed called strike to end the inning with no damage. DBacks came up in the bottom of the inning, were quiet except Pollock taking aim at the batters eye and making it above the line, 445 feet away. 1-0 DBacks after 1.

2nd inning (JoeCB1991) - Robbie Ray started off again being strike throwin’ Robbie Ray. Getting a ground out from Carter followed by a single to LF from Marwin Gonzalez, but he followed that up by striking out Lowrie and Castro for another scoreless inning. So then the Dbacks offense got another chance to pad their 1-0 lead. Salty led off by looking at strike 3. Aaron Hill started his AB with a 3-0 count, hit a foul ball off his foot, and then took ball 4. Unfortunately McCullers dropped in a breaking ball to strike out Lamb looking and Owings grounded out to end the inning.

3rd inning (freeland1787). It started with Lance McCullers grounding out. Then things got hairy when Altuve singled. Springer promptly grounded the ball into the left field corner for a double, scoring Altuve and Springer was thrown out between 2nd and 3rd. Ray quickly bounced back with a strikeout of Correa. In the bottom of the 3rd, Ray and Brito made two outs on four pitches. The Dbacks made the inning interesting with back-to-back singles to bring Goldschmidt up. Goldschmidt was unintentionally intentionally walked, which brought Salty to the plate. Despite a tough battle, Salty was rung up on a back-door breaking ball to end the threat.

4th inning (I Suppose I'm a Pessimist). Ray starts the inning with a K of Rasmus. Carter then singled off of Lamb's glove. Gonzalez followed with another single to left. But Ray struck out Lowrie and Castro to end the threat. In the bottom half of the inning, Hill popped out. Lamb reached on a ground ball to the first baseman Carter, who flipped it to McCullers covering, but he dropped the ball. This would be crucial. After an Owings K, Ray doubled down the line. While this did not score a run, a balk did, making it 2-1 D'backs.

5th inning (James Attwood)   Ray opened the fifth with another strikeout, his eighth of the game. Unfortunately for Ray, Altuve followed that up with a triple along the third base line. Ray then got ahead of Springer, but wound up plunking him in the hip to make it runners on the corners with one out. This brought Chip Hale to the mound, but Ray convinced his skipper that he was good to stay in the game. Ray then took on Carlos Correa in a lengthy at-bat that ended in a baes-loading walk. Houston then elected to pull Rasmus and inserted Evan Gattis to pinch hit.

The announcement of Gattis brought an end to Robbie Ray’s season after only 4.1 innings of work. Next was Randall Delgado. A fielder’s choice brought home Altuve, but that was the end of the damage.  In the bottom half of the inning McCullers sat Gosselin and Pollock down fairly quickly. That brought up Paul Goldschmidt who extended the inning with a single. McCuller then uncorked a wild pitch, moving Goldschmidt into scoring position. Jarrod Saltalamacchia followed that up with a ground-rule double to tie the game. That would be all the scoring though, as Aaron Hill grounded out softly to McCullers to end the inning.

6th inning (AzDbackfanInDc) - Delgado still in the game pitching to Gonzalez who is 2-2 on the day. Takes an 0-1 pitch and flies out to Goldy. Jeff Lowrie and Jason Castro follow both striking out to end the top of the inning with no damage done. Lamb leads off the bottom half of the inning and hits a 1-2 pitch which was caught by Gonzalez. In comes CO, Chad Qualls is warming up in the bullpen….. Co swings at at a pitch at his neck and strikes out. [Everybody clap your hands...] Peter O'Brien comes in to replace Delgado. He hit a 471 foot bomb last Friday right. He smokes the ball down the third base line and it seems to have gotten stuck in the corner of the field. I thought it was an inside the park homerun but hell no, of course it wasn’t. Where in the hell is the ball we all ask…He wound up getting a double on the play..

In comes Brito (the man with the nice ass according to my favorite 'pitter) who has pics of his butt on her phone - sorry Mr. Asteroid, I feel for ya bud. Gets the count to 3-1 and walks him. Gosselin comes to the plate. Double switch occurs and Astros bring in someone, I forgot who. Get the wave going people. Come On!. Some lady wins a red Mustang, must be nice. Oh yeah they brought in Chad Qualls and Valbuena. Rangers now lead 6-2 in the 7th by the way. Goss swings at a low pitch and strikes out. End of inning. Did I mention…..start the damn wave, people!

7th inning (Jim) The pesky Astros came back to tie things up for the third time with a run in the top of the seventh. Andrew Chafin and Daniel Hudson got the first two outs, but a two-out walk proved a bad thing, as a single and wild pitch allowed the walk to score. But the D-backs wasted no time responding, as A.J. Pollock lead-off with a single, stole second and took third on a wild pitch. With hindsight, he needn't have bothered, as Goldie's 33rd homer allowed both Paul and Pollock to stroll across home, for a 5-3 lead. That allowed Goldie to finish the season with an OPS of 1.005, the second in team history (min. 400 PA) to crack a thou, after Gonzo in 2001. Truly fabulous.

8th inning (nolanriley13) And it was the most important inning of the year. It was make or break time, and the D-backs called on their most reliable pitcher, known for doing double shifts then showing up for the game. Sleepy Brad Ziegler, in between shifts, came in looking like he usually does, needing another cup of coffee and a couple hours of sleep, to face Chris Carter, Chris Tucker and Chris Conger. Ziggy played his frisbee style of pitching with Carter, and made him look sick: over-matched would be a definite understatement. Tucker, the second guy up, didn't fare much better: up 2-1 in the count he got the diving change back to back and was grabbing some bench.

With two outs Conger came up, and while Zig was in between yawns, literally, Ccongs squeezed a hit thru the shift.  So with 2 outs, up came the tying run, in "Fidel" Castro. Castro, in between puffs on a cherry swisher blunt, just missed the only mistake Ziggy made, and pulled the hittable pitch foul - he was sitting on the pitch and location too, so, phew. He then weakly grounded out to Owings to end the visitors' half of the inning.

To start the D-backs 8th, Owings grounds out, Castillo singles, then the most exciting player on the field (next to George Springer), Socrates Brito came in to face Ziegler's long lost pitching brother, Pat Neshek. With Castillo on first, Brito got his chance on an 0-1 pitch and just fouled a big fat mistake. straight back. What happens next? Of course, eye levels get changed, and swings look bad. And that's what happened to Brito, who looked like a taco on his swing and miss to end his at bat. Up next is Gosslin, and that other most exciting player on the field, gets the chance at his 77th diving play against us - except the BABIP gods are with us on this one, as Springboard Springer finally comes up short, and the ball goes off the tip of his mitt. d

Double for Gosselin, and runners on second and third, for our second best player, in AJ's Fine Foods. With a plan of attack against Neshek, he tries driving the ball the right by staying closed. He has two great swings as a result, one pitch he fouls and the next, his timing was just a bit off through trying to stay closed. If he was trying to pull it, it could have been a three-run shot - but, alas, he squared it to right center for the final out. And there's your eighh-inning summary!

9th inning (Jim) Brad Ziegler took the ball and, from what I can see, gave us the  first six-out save by a D-backs regular closer since Matt Mantei in early 2003. It got a bit sticky for a while, when the first two men got on base, but Ziegler did what Ziegler does, getting a ground-ball double-play to stifle the threat. He notched his 28th consecutive save, tying J.J. Putz for the team record, and giving the fans something good to take into the long, dark, NFL infected winter. On offense for Arizona, Pollock lead the way with his three hits, while Goldie two and a walk, and Phil Gosselin a pair of knocks. 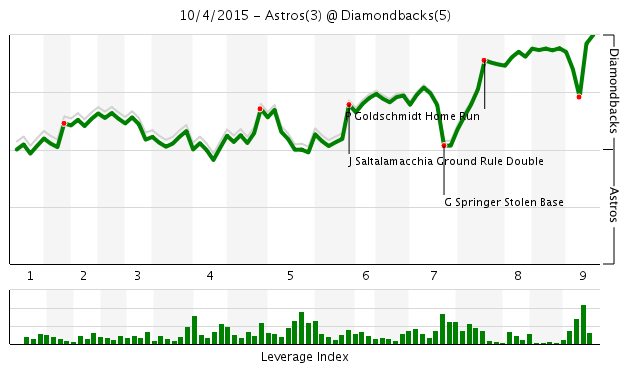 It's always a blast on here

I made it to 160 GDTs ,once SBN was wonky and once I was at someone else’s house and could not get on.
Watched all 162 games ,even if I dozed off in a couple.
I hope all your handegg and hockey and extreme ironing teams do well in the off season.
Bless you all.

All that remains is to thank everyone for making the SnakePit what it is: all the other writers, guest recappers, Fanposters, commenters, lurkers and even those we don't know! It has been a season of hope, I think, and I'm looking forward to seeing what Tony La Russa, Dave Stewart and the front-office will do over the winter to keep the team continuing to move in the right direction. We'll be hear to keep a finger on the pulse, so check back often. Like, every day. Because we're not going anywhere!