Diamondbacks 2, Astros 6: Rock out by the dugout

Share All sharing options for: Diamondbacks 2, Astros 6: Rock out by the dugout

There are games where the score doesn't matter, due to the awesomeness of the overall experience. Today would be one of those cases, where I got to hang out with imstillhungry95, his family, and a number of other great peeps, both SnakePitters and others, literally right next to the Diamondbacks dugout (see below). Given this, the actual on-field performance could have been as abysmal as last nig... Ok, almost as abysmal as last night, and it wouldn't have detracted from the overall experience. You get an entirely different view of the game when you are sitting as close as possible, and down at field level, rather than back in the stands.

I think the think which stood out most of all was the incredible speed of the game. We were down, virtually parallel to third-base, and the ball seemed to reach the fielders there in the literal blink of an eye - you can certainly see why it's called the hot corner. You hardly had time to react and think "The third baserman has that one," before the ball was already nestling in the first baseman's glove. We also had a great view of Socrates Brito's play in the second inning, when he gunned down a runner trying to advance from second on a sacrifice fly, his throw lasering in from right field and allowing Jake Lamb to apply the tag. Very impressive.

It was somewhat disconcerting to be quite so close. Felt a bit like being at an Arizona Fall League game, where it seems that virtually any comment made above a whisper can be heard by the players. This may (or may not) have led to a degree of self-censorship going on, vis a vis the performance of one J. Hellickson on this day. But it did allow ish95 to get Paul Goldschmidt to come sign a few autographs for us. Not me, of course, I'm too cool for such things. Okay, truth be told, I was suffering from a moderate attack of the vapors at being within 10 feet of extreme awesomeness. And he wasn't the only known face to visit our dugout section, as CEO Derrick Hall also popped in.

Ok, I suppose, if you insist, I should talk about the game. Sadly, it wasn't one in which the D-backs ever seemed anywhere as invested as the Astros. The visitors came out of the gates firing on all cylinders again, a leadoff double from the pesky Jose Altuve coming around to score and give them a lead they would never relinquish. Brito doubled to lead off the bottom of the first inning, but when he was stranded without even getting to advance, it seemed clear it was going to be another day of uphill struggle for Arizona against winning teams [we're now 31-53 there, though are hardly alone; the only three NL teams above .500 against teams above .500 are STL, PIT and CHC]

Hellickson's performance fell into the category of "barely satisfactory". He didn't walk anyone, but scattered seven hits and three runs over five innings, with a trio of strikeouts. He finishes the season with an ERA of 4.62, and while his peripherals suggest he was somewhat better, we really need to be doing a good better than that from someone who, right now, will almost certainly be our most expensive pitcher next season. I'm not convinced we don't have better internal options, and could likely get comparable performance for league minimum salary. Aaron Hill looked similarly unimpressive, going 0-for-4. He's on the books for $12 million next season.

We finally got on the board in the bottom of the fifth, Welington Castillo singling home A.J. Pollock to end the shutout, but the bullpen immediately gave that run back, courtesy of Randall Delgado. Matt Reynolds allowed a home-run to the only batter he faced in the seventh, and has now allowed a startling six home-runs in 13.2 innings of work for us. [Brad Ziegler and Andrew Chafin have also allowed six, in 140.2 combined innings...] Helped by a throwing error from Welington Castillo, the Astros added a sixth run off David Hernandez (unearned), though Goldie did swat his 32nd home-run of the season in the bottom of the eighth.

Goldschmidt reached base three times, also singling and walking, but Peter O'Brien was unable to take advantage of his first start in the major leagues, going 0-for-4 with three strikeouts. We really didn't show a great deal of patience, it only taking the Astros 113 pitches to complete the victory, although the Angels' dramatic snatching of victory from the jaws of defeat earlier in the day means that everything remains to play for tomorrow, and I'm sure the visitors will be every bit as motivated as they have been over the first two games. It'd be nice if the Diamondbacks could match that, and not play like it was the 162nd and final contest. 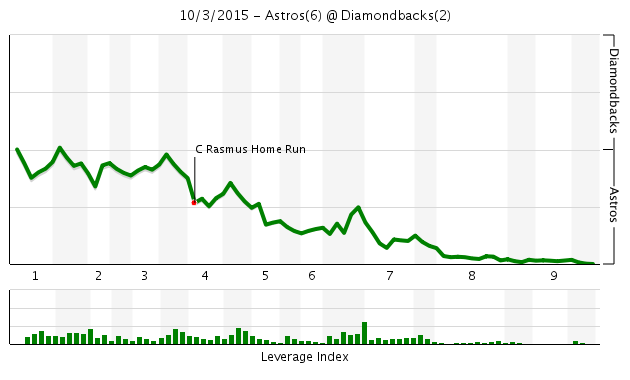 Not bad numbers, considering a number of regulars were kept quite busy indulging in ballpark fare and chitchat, thereby limiting commenting! GuruB led the way, ahead of nolanriley13 and JoeCB1991, with others present being: Astros?, AzDbackfanInDc, Clefo, I suppose I'm a Pessimist, Jim McLennan, Makakilo, MrMrrbi, NumberOneIanKennedyFan31, SongBird, asteroid, datr22, freeland1787, gamepass, hotclaws, imstillhungry95, onedotfive, piratedan7, shoewizard and thunderpumpkin87. Comment of the thread to AzDbackfanInDc.

and the Michelob Ultra trying to start the wave?

Tomorrow it's a sad occasion, as ever, the last game of the season. While some of the games may infuriate, irritate and annoy, they're still an awful lot better than no Diamondbacks baseball at all. Which is what we'll have after Sunday. So, one last effort, folks, with Robbie Ray seeking to end the 2015 campaign on a winning note. Many thanks again to ish95 and his father for arranging today's get-together; it's one which will stick in my memory for a long time to come.