Share All sharing options for: Diamondbacks 5, Astros 21: Beercap - The Last Hurrah of 2015

Though, for the purposes of finishing off this recap, it's more like the clanging chimes of doom and sad trombones. The Astros continued to score, and ending up scoring 21 times, setting a new, dismal record for the franchise. Particular highlights were Matt Stites becoming the first Arizona pitcher in 15 years to allow seven runs while retiring one batter of fewer [Armando Reynoso managed to allow seven without retiring a batter, in an April 2000 start] If the team was going to see the last hope of climbing Mt. .500 ruthlessly crushed, this was as least a decisive way in which to do it.

The Diamondbacks restored the faintest vestige of respectability to proceedings, scoring three unanswered runs over the final two times at bat, and thereby delivering the least tasty free tacos ever. Aaron Hill got three hits and a pair of RBI, while Phil Gosselin reached twice, on a hit and a walk. Otherwise... I really hope it goes a great deal better tomorrow, since I'll be at Chase Field for the last time this year. If it goes like this, I think I'll be setting fire to my seat. That should give Bob and Bert something to talk about. 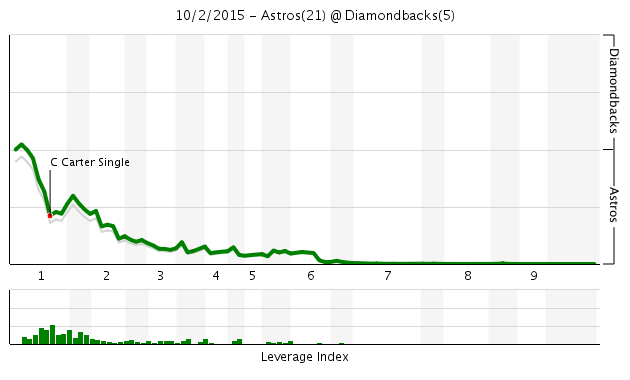 Somewhat remarkably, over 400 comments in the GDT. with JoeCB1991 leading the way, ahead of NumberOneIanKennedyFan31 and preston.salisbury. Also watching the train-wreck from the platform: AzRattler, Clefo, Dbackguy, Diamondhacks, GuruB, I suppose I'm a Pessimist, Jim McLennan, Makakilo, MrMrrbi, SongBird, asteroid, catbat, datr22, ford.williams.10, freeland1787, gamepass, hotclaws, onedotfive, piratedan7 and since_98. Nothing got more than two recs though, and if ever a game deserved to be forgotten entirely, it would be this one.