Diamondbacks 2, Dodgers 7: That difficult 17th out

After 5.1 innings today, Trevor Cahill had a no-hitter going. Before he retired another batter, it was all gone, and he was instead on the hook for his 11th loss, as the Dodgers completed the sweep of the Diamondbacks

Share All sharing options for: Diamondbacks 2, Dodgers 7: That difficult 17th out

Of all the Diamondbacks' pitchers you'd expect to take a no-hitter into the sixth inning this year, Trevor Cahill would probably be near the bottom of the list. Of the seventeen people with 15 or more innings pitched this year for us, only Mike Bolsinger (.308) and Brandon McCarthy (.298) had allowed hits at a higher rate than Cahill's .285. But somehow, that's where we found ourselves this afternoon at Chavez Ravine, as Cahill had been pretty effective against the Dodgers order the first two times through it. The only base-runners allowed came on a pair of walks, who both stole second but were stranded, and a Didi Gregorius error, immediately erased by a double-play.

Meanwhile, the Diamondbacks had taken a two-run lead, much to just about everybody's surprise. The first came in particularly shocking style, just as we were about to lament wasting yet another bases loaded, nobody out situation. We had filled the bases in the second on consecutive singles by Miguel Montero, Cody Ross and Jake Lamb, only for Alfredo Marte to fly out, with Montero being doubled out at home, on an ill-advised attempt to score from third. However, Gregorius managed to get Arizona on the board, with a little squibber up the first-base line, which he was just able to beat to the bag.

The lead was doubled in the third, as Arizona took advantage of some uncharacteristic wildness by Zack Greinke. He walked both Ender Inciarte and Montero, and Ross then knocked the former in with a nice looping single to right. With two outs in the third, that was about the end of anything good at all off the Arizona bats. The sole base-runner they mustered the rest of the way was Ross's third hit of the game, a double with one out in the sixth inning. Ross ended the day with half of the Diamondbacks' hits total, for his first such game since May 10, and only his sixth multi-hit game of the year.

Still, we were 2-0 up, and Zack Greinke was gone, pulled for a pinch-hitter, who was retired by Cahill to start the sixth. I wouldn't say I was on the edge of my seat, but I was probably paying slightly more attention than would normally be the case, for game #143 in a season that has more or less sucked since Opening Day. This increased level of interest proved short-lived, as Dee Gordon doubled. Things were about to get ugly. And when I say "ugly", I mean "pit-bull licking a nettle". After going 0-for-16 the first and second times up, the next thirteen Los Angeles hitters went 5-for-9 with four walks, seven RBI and three home-runs.

Two of those homers, both three-run shots, came off the bat of Adrian Gonzalez, who has been insanely productive against us, and this goes back to his days in San Diego. Coming into today - so not counting 2-for-4 with two home-runs and six RBI - his line against the Diamondbacks was .309/.404/.543. Among our regular opponents (those with 300 career at-bats against us), that .947 is good for third all-time, behind only Todd Helton and Barry Bonds. And it's possible Gonzalez is now second, with Helton not that far ahead at .960. [Bonus insanity. Bonds' OBP against us was .499. He basically reached base half the time we saw him]

After that all happened, Oliver Perez was on the mound, and his Andre Ethier #HewenttoASU in the back, and the Dodgers shrieked to high heaven after warnings were issue to both benches. With Perez having just allowed consecutive home-runs, I can kinda see a cause for concern, but the 79 mph slider with which it was done, is not exactly the favored tool of headhunters. The umpires then seemed to let things get a bit out of control, ejecting not just manager Don Mattingly, but also their bench coach and Clayton Kershaw, who was needlessly flapping his gums from the dugout at Laz Diaz, who was backing up rookie home-plate umpire Scott Barry.

But, just as those who bet on the over for Dodgers brawls on SnakeLines, seemed to be getting their hopes up, things calmed down, and the rest of the game played out with little or no incident. The Dodgers completed the sweep and what can only be described as complete ownership of the Diamondbacks, having won 15 of the 19 contests between the two sides this season. The only time we've lost more often to any opponent in a year was back in 2004, when the Dodgers went 16-3 against the Diamondbacks. I think I speak for all Arizona fans, when I say I'm very happy to see the back of them. 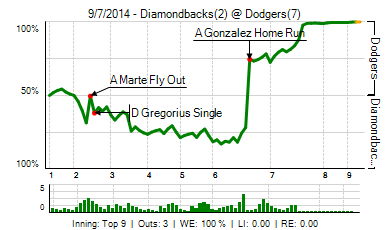 That's almost as long as a game of Monopoly

The loss, combined with the Rockies win, means we are now tied for second in Tankapalooza 2014. Hell, even the Rangers won today. There's a day off tomorrow, so that's nice. We reconvene on Tuesday in San Francisco, with Wade Miley continuing our reunion tour, as he goes up against another former Diamondback in Yusmeiro Petit. And there's no Eric Chavez to break up a perfect game in the ninth this time...